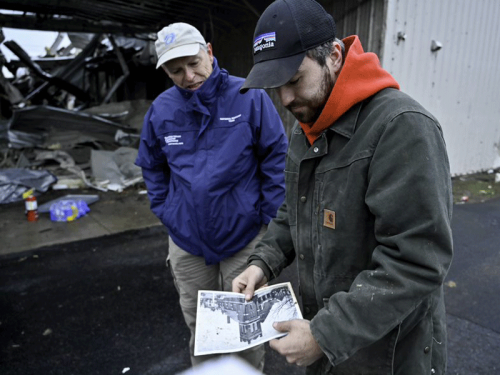 Davis Mills, a member of First Presbyterian Church in Mayfield, Kentucky, and Dave Doehnert of the Presbyterian Disaster Assistance National Response Team, look at an old photo of the church as Davis and his brother work to salvage items from the church. (All photos by Rich Copley)

MAYFIELD, Kentucky — Davis Mills looked down at the painting in a box in the back parking lot of First Presbyterian Church in Mayfield, Kentucky, late Saturday afternoon and said, “That’s what it used to look like.”

“Used to” was as recently as a little over a week before that afternoon, before a deadly tornado barreled through downtown Mayfield the night of Dec. 10, destroying numerous downtown buildings, including First Presbyterian Church. One church family considered taking refuge in the church’s basement as the storms approached.

“Their decision not to go was a great decision because the whole church is in the basement now,” First Presbyterian Church member Danny Upton said. 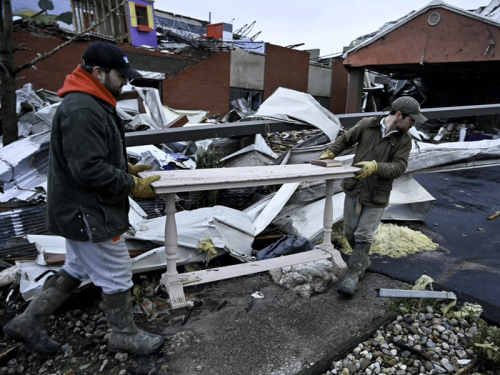 Davis and Stuart Mills carry items out of First Presbyterian Church Mayfield, which was destroyed in a Dec. 10 tornado, in this photo taken on Dec. 18, 2021.

As the sun set and temperatures dipped into the 30s on Saturday, Mills and his brother Stuart tried to make quick work of salvaging items from the remains of the building at the corner of Broadway and 9th Street in this town of just over 10,000 people in the southwest corner of Kentucky. They pulled out tables, chairs, documents like an old black-and-white photo of the church building, and a framed letter describing how the church was the first religious organization in Mayfield, established in 1832, and that in 1915, “a new and most beautiful building was completed to meet the demands of the growing organization.”

Jenny Sims started playing organ in that building when she was 15. She and her husband Bob were married there. Their children were baptized in that church building, which stood for more than 100 years. 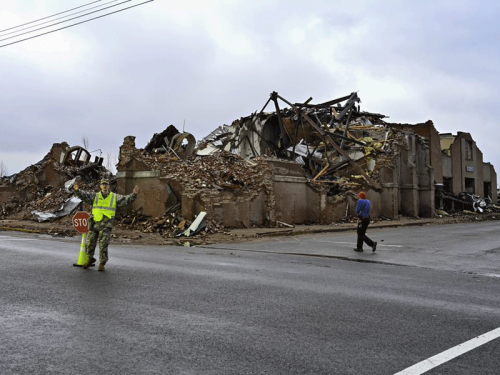 A National Guard member directs traffic in front of the wreckage of First Presbyterian Church in Mayfield, Kentucky, which was destroyed in a tornado Dec. 10, on Dec. 18, 2021.

The personal history was about all Sims could bring herself to relay Sunday morning as First Presbyterian Mayfield gathered in the break room of Kendor Wood, a kitchen cabinet door manufacturer in Mayfield owned by Upton and his wife, Juanita Upton.

“Christmas can be anywhere,” Upton said, recalling, “Jesus was born in the stable. So, it starts wherever we are, and it’s not the building that you meet in or the place, it’s the people. That’s the church: the people.” 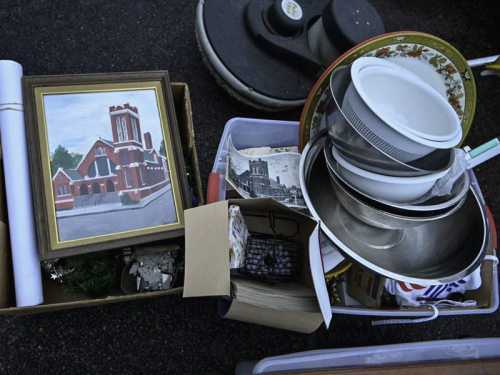 Boxes containing items Stuart and Davis Mills have salvaged from First Presbyterian Church, Mayfield, which was destroyed in a tornado.

The First Presbyterian Sunday morning service was attended by several dozen members, turning the break room into a standing-room-only venue. Among them were Dave Doehnert and Donna Melloan, Presbyterian Disaster Assistance (PDA) National Response Team (NRT) members who had been in Western Kentucky most of the week.

“This isn’t one disaster,” Doehnert said. “This is a chain of disasters.” 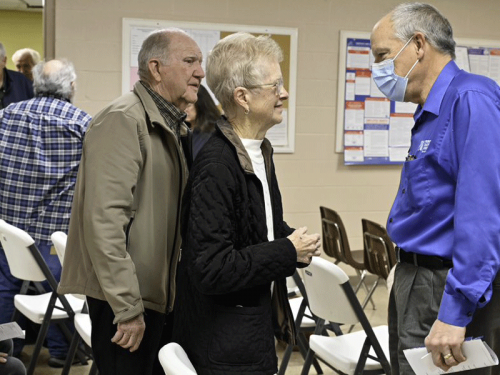 Doehnert and Melloan have both been on the NRT for nearly a decade, responding to incidents from California wildfires to East Coast hurricanes, and many disasters in between. One of the distinctive features of the tornado outbreak in Western Kentucky Dec. 10 and 11 is how widespread the severe damage is. In the Presbytery of Western Kentucky, which asked PDA to assist, severely impacted communities stretch from Mayfield more than two hours east to Bowling Green. PDA has also reached out to presbyteries in other areas and states impacted by the multi-state outbreak of tornadoes that weekend.

While Mayfield was by most estimations the hardest struck community by a monster tornado that stayed on the ground for more than 200 miles, the storms that produced it spun off numerous tornadoes in the Midwest.

As they went to communities impacted by the storms, Doehnert and Melloan were looking to address immediate needs and start answering longer-term questions, such as where could volunteer teams be hosted when they come to the region to help in the coming months and years. One consistent message they were hearing was that relief groups were overwhelmed with material donations. Unless fulfilling specific requests for items, the best way people can help is to donate to groups like Presbyterian Disaster Assistance so funds can be used to address short- and long-term needs as people in the communities determine. Those funds can often be spent locally, thereby boosting a hard-hit economy.

While many church-based disaster response programs are geared toward first responses like chainsaw crews and feeding programs, PDA concentrates on addressing immediate financial needs through grants, helping local Presbyterians serve and connect to services, and planning for long-term recovery, which in the case of many people impacted by these tornadoes is going to be a major effort.

At Central Presbyterian Church in Princeton, Kentucky, about an hour northeast of Mayfield, the Rev. Donna Webster, Central’s transitional pastor, says the church was left untouched, which has helped put it in a position to serve its members and the community. Several church members lost or sustained severe damage to their homes. One member is even living in the church’s manse, which was not being used. 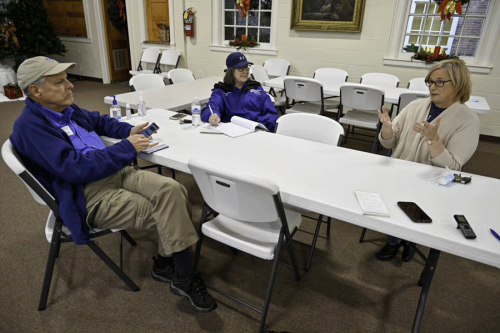 “Our members are strong in their faith, and they are helping one another,” Webster said Saturday afternoon. “Fortunately, we have a lot of people with a lot of abilities.”

Those abilities range from a member who is a general contractor and is helping members with lost or damaged homes navigate their next steps, to a church member’s daughter who is a professional grief counselor and is helping arrange to offer services through the church, to a restaurant owner who was called on by Chef José Andrés’ World Central Kitchen to help supply food to people in need and to first responders. 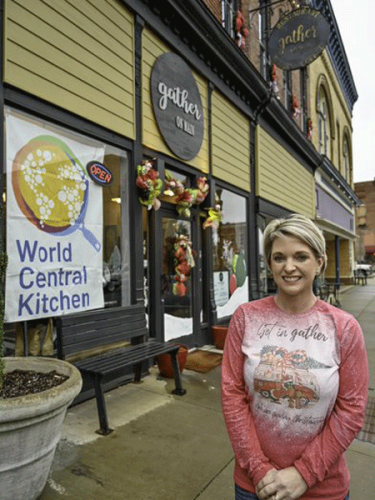 Central Presbyterian Church member Cathy Lewis is the owner of Gather on Main in Princeton, Kentucky, which has been working with Chef José Andrés’ World Central Kitchen since tornadoes struck Western Kentucky.

“We’re not a lot of help in the field,” Lewis says. “We can’t drive front loaders and bulldozers. This gives us a way we are able to help.”

Lewis and Webster both invoke this thought: “Kind acts are like snowflakes. Alone they are small, but together they cover everything.”

Even if it doesn’t look a lot like Christmas …

As Lewis spoke, Gather on Main was hosting its Cookies and Milk with Santa event. The week before, the event had to be canceled in the immediate aftermath of the tornado, which directly impacted some people involved in the event. But the restaurant wanted to carry on last Saturday, helping give children some sense of normalcy amid the chaos.

Likewise, Webster said the church will continue with its children’s Christmas play this week.

The NRT members said that a disaster near the Christmas holidays can present several challenges and opportunities, from efforts to still make the season special with things like toy drives to the difficulty of finding volunteers amidst family gatherings and Christmas travel.

Many volunteers around the region will not be home for Christmas, as even in the NRT, there are requests for volunteers that may pull people away from loved ones at the holiday.

“It’s tough to be gone for Christmas,” Doehnert said. “But it’s even tougher to have your home torn up for Christmas or lose your loved ones right before Christmas.”

The weekend before the tornado struck, the Yuletide season brought First Presbyterian Church together with its neighboring Downtown Mayfield churches — First Christian Church and Mayfield First United Methodist Church — as they held an Advent walk together. The Sunday after the tornado, the members of First Presbyterian and First Christian held a joint communion service between their former buildings.

“They had a spiritual moment together with God the week before this happened. What’s that about?” Melloan said. “I think God, of course, was in the middle of this and helped them learn more about each other so they can lean on one another.”

Serving and being served 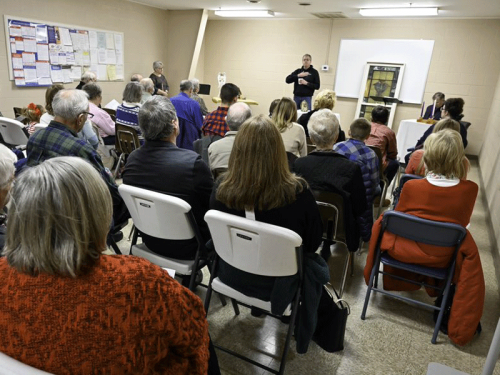 Building and Grounds coordinator Dale Usher of First Presbyterian Church Mayfield leads a discussion about next steps for the church at the Dec. 19 worship service.

At one point, the worship service did turn into a trustees meeting, of sorts, as Building and Grounds head Dale Usher led a discussion of next steps, including efforts to salvage what is salvageable from the wreckage of the church building and next steps forward.

Don Barger, the lay pastor currently leading First Presbyterian, encouraged the church to think about what church will be in the 21st century and how the new church building can be part of living into that future. 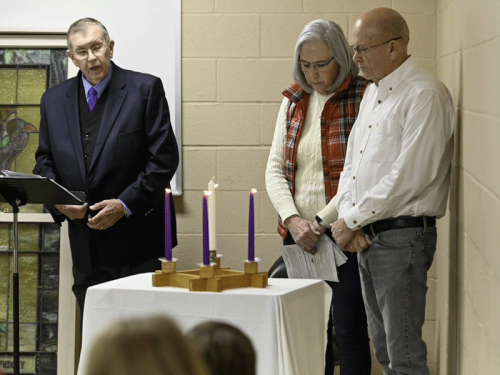 Bob Sims also made a few announcements on behalf of the church’s deacons, including efforts to find new meeting spaces for some groups that used the church, including Alcoholics Anonymous, and how to find the family the church was sponsoring in an adopt-a-family program for the holidays. The family’s home was destroyed in the tornado.

“We’ve always tried to be of service to the community,” said Melinda Craig, First Presbyterian Church’s clerk of session. “It’s a little bit disconcerting to be at the other end.”

In his sermon, Barger reflected on the time Jesus was born into, the brutal rule of Caesar Augustus.

This Friday night, on Christmas Eve, First Presbyterian Church will gather again at Broadway and Ninth to once again celebrate the birth of Jesus Christ, just as it has at that corner most Christmas Eves since 1915.

What is there to celebrate, Barger asked, and then answered his own question: “Light and life cannot be destroyed.”