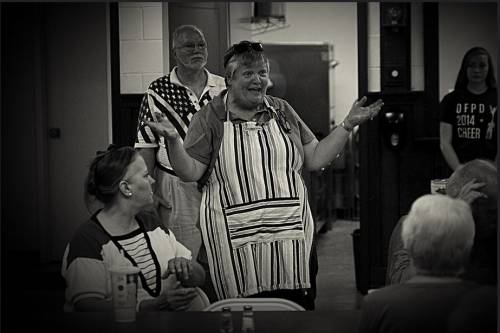 ST. PETE BEACH, FLORIDA – When the Rev. Dr. Nancy Jo Dederer earned her Doctor of Ministry degree in parish revitalization, she had no idea that church transformation would become her calling.

And not only her calling, but also a blessing to the people of Homewood, Illinois.

“I had anticipated doing my degree at McCormick [Theological Seminary] in preaching, but choosing parish revitalization was an act of the Spirit,” said Dederer, who became pastor of the First Presbyterian Church of Homewood in 2001.

Homewood, Dederer quickly discovered—a Chicago suburb with a population of roughly 18,000—reflects many of the same trends that are changing the demographic makeup of the United States.

“When I started, we were averaging 150 in worship,” Dederer said. “Since then, we have lost 100 members either to death, moving away to be with their children, or people who just weren’t ready for change. The primary change that’s happening in Homewood is that as the older, white people are dying, retiring, or moving, African-American residents primarily from the Southside of Chicago are coming and buying houses. In addition to that, the church, which was primarily associated with the former pastor who had served it for 33 years, had an identity problem. And we were still stuck.”

Stuck, that is, until the congregation discovered a way forward through the New Beginnings program, an assessment and prayer discernment process that helps churches make meaningful decisions about their future. Formerly offered through the Presbyterian Mission Agency’s office of Vital Congregations, the program continues to be available to PC(USA) congregations through the Hope Partnership for Missional Transformation.

When an opportunity to take part in New Beginnings came around to the Presbytery of Chicago, not only did the presbytery invite the Homewood Church to apply, but it also provided the congregation with a scholarship covering 80 percent of the program cost.

“So we did New Beginnings in 2013 at Eastertime, a good time, resurrection and all,” Dederer explained, “except that we realized through the program’s four main questions—‘What’s your passion?’; ‘What are you good at?’; ‘What are your resources for that?’; ‘What’s relevant?’—that our passion was worship and music, and that wasn’t relevant to anybody except us. It was a painful thing to say out loud—painful for me as a pastor, painful for the church that’s been in town the longest to come to the realization that they are out of touch. And it’s a church that’s filled with wonderful, God-loving people!”

Once they confessed this, they spent the next nine months asking what they were going to do about it. And as the topic continued to come up at every session meeting, the elders realized the first thing the church needed to do was to get to know its community better.

“Homewood is a community that’s working hard to be good multicultural neighbors to each other and the congregation has also adopted that practice, welcoming the opportunity to host a presbytery-wide workshop on systemic racism,” Dederer said. “Since our congregation is mostly older and not in the schools—which are roughly 50 percent white and 50 percent black with some Latinos—they’re not seeing the change among the young families in town. So at session meetings, we’d go back over and look at this information and say to ourselves, ‘What are we going to do—what do we want to do—to get to know our community better,’ and every single one of them around the table would say, ‘Don’t ask me to talk to anybody I don’t know.’ And it stalled. I like to think that our plan was maybe incubating. We just needed some time to process.”

For nearly ten months session members prayed as they sought to discern how to respond faithfully to what they had learned as a result of the assessment process. In March, Dederer presented the session with a list of 12 conversation starters, including some “outrageous ideas,” such as the church’s opening a café. 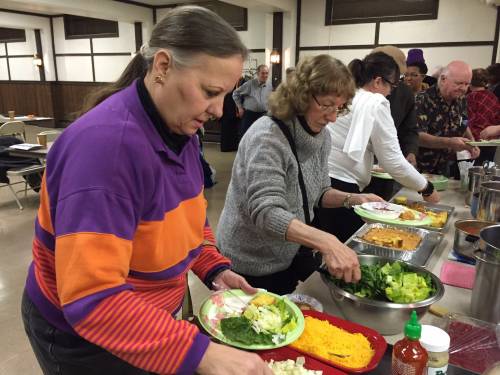 “We went around the table and each person read one of the ideas,” said Dederer, “and every single thing, whether it was a big ticket item or a small ticket item, was shot down by the person who said it. And I just went home shaking my head because I couldn’t even get a conversation going.”

In the meantime, one of the session members, who hadn’t been able to make the meeting, reviewed the list of ideas that Dederer left in his church mailbox.

“When he asked me about the list, I told him the story,” she said. “We just need to get to find a way to talk to people, and that’s what that list was about—how do we connect with community? So he told me he’d work on the idea of hosting dinner for the summer, and that he’d bring it up at the next session meeting.”

Being as good as his word, when he brought the concept of hosting summer community dinners before the April session meeting, every prior objection fell away. Session volunteers quickly formed a team, which decided to do weekly cookouts on Monday nights during June, July, and August of 2014, with the express purpose of getting to know the community.

After the team handed out fliers and put up signs to promote the free dinners, no one in the church knew whether anyone from the community would respond. But on that first Monday, 30 people showed up, nine of whom were guests who had no previous connection with the church.

“And that was only the beginning,” Dederer said. As the summer progressed, the dinners began to draw 30-40 people every week.

“What we learned all over again was the power of prayer—prayer for answers, guidance, prodding, and a new boldness to step out,” she said. “What we also learned was that people were hungry in Homewood. People were taking the bus from the next community over to come and eat at the church. We started getting people who were physically hungrier, and who were telling other people about the dinners. It just turned into this wonderful, weekly, low-key gathering.”

Once the summer had ended—with no community dinner planned for Labor Day—the church decided that it wasn’t ready to stop.

“One woman said, ‘We have to continue,’” Dederer recalled. “She told me, ‘I’ll do the purchasing if someone else will do the cooking.’ So the next Monday we had the dinner again, and we haven’t stopped since. We’re in our third year now, and the energy is still there. We will not take Labor Day off again. We’ll be here every Monday!”

Since launching the weekly dinners, the church has also attracted the attention—and participation—of community sponsors, such as Homewood Chevrolet, who hosted the July 4 dinner, and a local pizza parlor, Aurelio’s, which hosted a spaghetti dinner earlier this month. 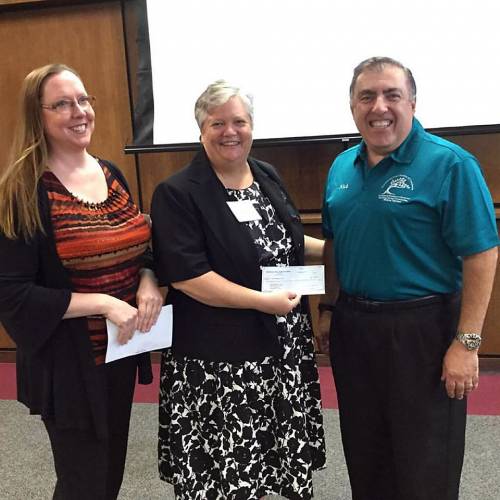 “In March, the Chamber of Commerce asked us if we would be their charity partner for a golf tournament,” said Dederer. “When I asked them what that meant, they said it meant we’d receive money specifically for our community dinners, so I said okay! After the second anniversary of the start of our dinners, which happened to be the date of the golf outing, they gave us a check for $1,000, which was 1/6 of our total budget. That was such a huge affirmation for us, and since then, other partners and financial gifts have followed, which is a good thing, because some of our folks are getting tired.”

Dederer was quick to point out that when the church decided to continue the dinners, the question about finances was the very last question that was raised.

“That was a transformation,” she said. “I don’t think the session realized it, but nobody talked about money until the motion was coming. ‘Let’s do this,’ they all said. So money has never been the question. It’s all been based on need and desire and relevance. I credit the New Beginnings program a lot with that, and I credit our church leaders.”

In addition to providing dinner and community, the dinners have afforded an opportunity for the directors of area agencies to make presentations on such topics as making residents’ homes more energy efficient, or the ways that Respond Now, the community’s local connection for help with food, housing, medical, and utility expenses, can provide assistance. This fall, the church is inviting educators from the family shelter and local hospital to speak about domestic violence and stress respectively.

The dinners have also blossomed into a venue for distributing clothing, non-perishable food items, and gifts.

“We had one member who made scarves and another who brought 30 pair of gently-used socks at Christmastime,” Dederer said. “You never know what’s going to be on that ‘sharing table,’ ever—sometimes it’s toys for children, personal hygiene items, backpacks, all kinds of stuff. It’s beautiful. And the other thing is I’ve watched our members really start building relationships with people. We learn their name when they come the first time, and they’re called by name when they return.”

When the church first started hosting the program, Dederer said that she never thought anyone would say “’our thing might be community dinners,’ but it’s all grown so organically.”

“What it has done,” she added, “is that it has given us more energy. It’s given us hands-on ways to put our faith to work.”

Although each dinner opens with a prayer or devotions appropriate to the season—such as lighting the Advent candles—Dederer said that “getting a little stronger, a little more obvious in our Christian witness” is the congregation’s next challenge.

“So the storytelling workshop [taught by Casey FitzGerald] here at the evangelism conference is what has caught my eye,” said Dederer. “Today we worked on Jesus’ calming of the storm. I could see myself opening one of the dinners by saying, ‘Where were you last week? I was at this conference, and boy did it ever rain…which reminds me of a story that I want to tell you.’ Telling the story and then maybe working on some of the parables—table stories that Jesus told —probably would go over really well with that group. So it’s me getting brave enough to step out and do that.”

Through the Hope Partnership for Missional Transformation, the  New Beginnings assessment and prayer discernment process helps churches make meaningful decisions about their future. Useful for congregations who are in various stages of their life cycle as they transform for future generations of mission and ministry.