Thanks to a gift, plenty of scholarships are available for Camp Q in New York 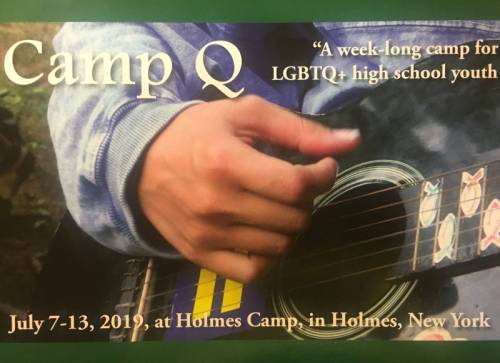 LOUISVILLE — This summer Holmes Camp & Retreat Center in New York will offer a week-long camp experience for LGBTQ+ students and their allies designed to build an atmosphere of trust and support.

The camp and retreat center in Holmes, N.Y., which is a facility of the Presbyteries of Hudson River, Long Island and New York City in  the Presbyterian Church (U.S.A.),  will host Camp Q July 7-13.

When he was interviewed at Holmes two years ago, Breault discussed different ways to reinvent the camp and retreat center’s programming for the 21st century.  When he told interviewers about Camp Pride, they got excited, he recalled.

“We want to be welcoming and relevant to all people,” Breault says, “particularly to those who have been told they are unacceptable and feel left outside of their community of faith. Too often the church sends the message that LGBTQ+ people are not OK as they are created, when in fact, Jesus welcomed the oppressed and outcast as children of God.”

After spending a year determining what the camp already had for programming, Breault and other Holmes staff went to the list of programming they’d talked about implementing.  With Camp Q, Holmes staff want to create an experience where high school students who identify as LGBQT+ could celebrate and talk about issues that can occur when they feel targeted or made to feel outcast by the church.

More Light Presbyterians executive director Alex Patchin McNeill said it’s very special for students to have a particular place where other people are like them, where they can be affirmed in their faith and identity.

“It’s what we hope for everyone,” he said. “As I work with other Presbyterian camp and conference centers to increase the breadth of their welcome and inclusion of LGBTQ+ youth, we celebrate that this opportunity at Holmes exists.”

What Breault remembers most about Camp Pride was the time around the campfire during the final night of worship.  Students were invited to shout out what they were grateful for. According to Breault, those present heard things like, “This is the first time I could hold hands with someone in public and it was OK.”  Another person said, “This is the first time I was in a suit and tie, in male clothes.”  After about 20 minutes there wasn’t a dry eye in camp, Breault said.

“Young people came together to support each other,” Breault said. “It was an affirmation that they didn’t have to listen to the hetero normative way expected of them.”

Because Holmes Camp & Retreat Center is less than two hours northeast of New York City, Camp Q attendees will spend a day seeing Dear Evan Hansen on Broadway, walking through Greenwich Village and visiting the Stonewall Inn, considered by many to be the place where the modern LGBTQ+ movement began.

Because of a financial gift, Holmes has ample funds for scholarships to help campers attend. Deadline to apply is June 15.

Presbyterian Mission Agency’s Brian Frick, the Office of Christian Formation associate for camp and conferences, said he’s also excited about Holmes Camp & Retreat Center offering Camp Q.  “Jesus was all about meeting people where they are,” he says. “Whether it was the Samaritan woman at the well, the tax collector Zacchaeus or others, he welcomed them into full participation as children of God.”

“I’m excited to hear the stories that come out of this innovative ministry opportunity.”