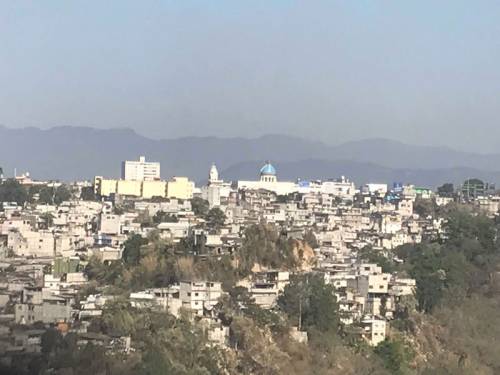 In Guatemala City and throughout the rest of the nation, income inequality is among the most pronounced in Central America. (Photo by Mike Ferguson)

LOUISVILLE — The causes of the refugee crisis along the United States’ southern border and its many communities — as well as actions Presbyterians and others can take to help stem the crisis — were among the topics of a Friday webinar put on by the Presbyterian Mission Agency’s Office of Public Witness.

“People Migration and Borders: A Discussion of Root Causes of Migration and Avenues for Change” included speakers from the Association of Returned Guatemalans, which helps deportees arriving to that country; ActionAid U.S. A., which is working on land reform and international development, among other initiatives; and Presbyterian Disaster Assistance, which has as part of its mandate providing aid to displaced persons, including refugees.

Two representatives of the Association of Returned Guatemalans discussed their work reintegrating returned migrants into Guatemalan society. That includes connecting the people who’ve been returned to Guatemala with potential employers as well as creating partnerships with the Guatemalan government to provide greater vocational training and job placement.

Challenges that returning Guatemalans often face include not having an identification card and not having transportation. “We try to give returnees a perspective on what to expect when they come back,” said one of the two representatives — both are named Mario. He himself had worked in the U.S. for a few years before returning to Guatemala.

Doug Hertzler, senior policy analyst with ActionAid U.S.A., said climate change and the growing concentration of large farming operations have led many Guatemalans to abandon small-scale farming and head for large cities, which are often beset with other problems such as high rates of crime and violence.

“Those large plantations have grown, and that’s one of the reasons people are coming to the U.S., because they don’t have enough land,” he said. About 2.5 percent of Guatemalan farm operations control two-thirds of the nation’s arable land, he said.

Rather than investing so much money in border security, “a better use of the money would be to support land reform and rural development in Guatemala,” he said.

Guatemala is one of Central America’s wealthiest countries, Hertzler said, but along with Honduras the nation has “one of the most unequal economies.” A study by the World Health Organization concluded that violence and food insecurity are linked, he said, and each can lead to the other.

Many Guatemalan migrants are indigenous people, he said, and are the victims of inequality and political disempowerment that go back decades, including the 1954 Guatemalan coup d’état carried out by the U.S. Central Intelligence Agency and the corruption that followed.

Over the past six months, conference moderator Catherine Gordon noted, five Guatemalan children have died crossing the border into the U.S. Susan Krehbiel, catalyst for refugees and asylum with Presbyterian Disaster Assistance, said that while advocacy with Congress is currently difficult and nearly impossible with the Trump administration, “our message is to divest from harmful practices and invest in helpful practices,” including support for community-based alternatives to detention and stronger economies in the Northern Triangle countries — Guatemala, Honduras and El Salvador.

She highlighted five investments in the U.S. immigration system suggested by the National Immigrant Justice Center:

“The crisis at the border,” she said, “is of our own making.”

June 20 is World Refugee Day, a day to pray and work to ensure that the needs of the world’s 22.5 million refugees are being met — as well as celebrate the former refugees “who are now part of our communities and our churches,” as PDA notes on its website.

For Krehbiel, World Refugee Day is a chance to “commemorate and remember the people still in search of safety and a new home.”