Completes ‘Affirmation of Approach’ document for distribution to denomination

DECATUR, Ga. – The Way Forward Commission wrapped up its second face-to-face meeting today on the campus of Columbia Theological Seminary. Following its initial day of deliberations the group finished its edits of the “Affirmation of Approach” document describing its work and hoped outcomes. 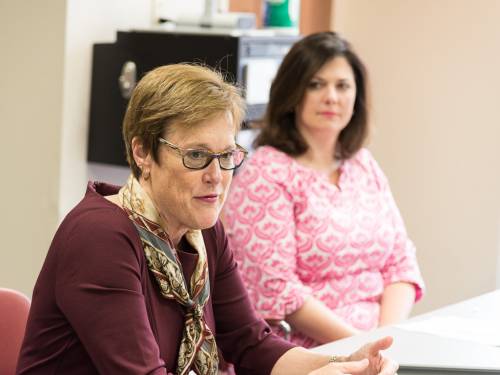 Leanne VanDyk, president of Columbia Theological Seminary, addresses the Way Forward commission at its March 5-7 meeting on the seminary’s campus. Commission member Sara Dingman is in the background. (Photo by Gregg Brekke)

Joined at the beginning of the day by Leanne VanDyk, president of Columbia Theological Seminary, she offered a “word of encouragement” to the group. “We’re with you in serving the church in a shared mission of what God has for us,” she said.

Asked by Way Forward Commission Moderator Mark Hostetter how seminaries are thinking of preparing leaders for new worshiping, or new witnessing, communities, VanDyk said, “I have every confidence we are going to step into the arena of preparation for church planters.”

Noting the emerging need to have mechanisms for training bi-vocational pastors, an uncommon model for the Presbyterian Church (U.S.A.), she said, “We put a caution flag in that issue.  … We can’t assume we know what it is. We’re talking to pastors from the Black church, and other communities where bi-vocational ministry is more common, to see how that works.”

Following a devotional on the Belhar Confession, Paul Roberts, president of Johnson C. Smith Seminary, spoke to the group, positing hope in its work. “One thing that frustrates me about the current state of the PC(USA) is how difficult it is to implement change,” he said.

“We believe God is doing a new thing in the world and that the Holy Sprit is stirring creation with real vigor,” he said of the need for reform in the PC(USA). “So for all that our denomination does well for process and polities — committees and various entities — that’s a tough mission to move when you believe in your heart that the stirrings of the Holy Spirit are up on us and you need to adapt and adapt quickly.”

“Your job is to figure out how the denomination can adapt and hear where the Spirit is moving,” Roberts said. 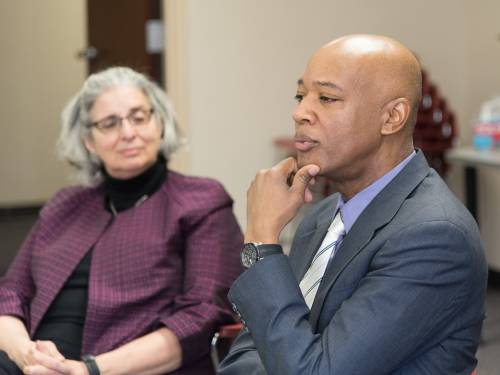 Discussing Johnson C. Smith’s move away from traditional masters of divinity programming in 2014 to a model of professional development, Hostetter asked how the school could serve the “growing core of our denomination — immigrant communities, nontraditional new worshiping communities.”

“We may be an example to the PC(USA), to show the denomination that a seminary can do some things differently and not encounter catastrophe,” Roberts said. “Our polity is really clear about the ordination process and is pretty strict about the requirements needed for ordination. The process as it’s laid out is very expensive. … We need some room in our polity; I don’t think we need to do away with the process as it exists, but we do need to make some room in our polity for alternate paths towards ordination.”

Asked by commission member Sara Dingman what he sees bright spots in the PC(USA), Roberts said, “I’ve kept my ear to the ground; I know people have lots of anxiety of what’s going to emerge. That goes with the territory — change creates anxiety. I’m excited the denomination empowered a commission and a time of thinking and visioning and talking of various people around the country is taking place. 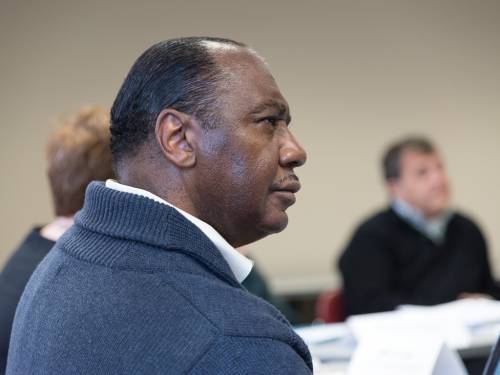 Continuing its deliberations on the “Affirmation of Approach” document, commission members refined the message of their purpose and process and approved the document, asking that it be prepared for publication and expedient translation.

The concluding paragraph of the Affirmation reads, “God calls the PC(USA) to a faithful and exciting future. In the bold, confident hope of God’s grace, we journey together toward that future. We solicit your prayers for this movement of the Spirit.”

Commission members also discussed ways the Presbyterian Center in Louisville could address what they perceive as an inhospitable corporate atmosphere. Suggestions ranged from making water and coffee accessible to visitors, to converting a section of the center to an art museum.

Commission member Adan Mairena reminded the group of the other gifts offered from Louisville, in theological statements and advocacy positions of past and current Stated Clerks.

Brief meetings of subgroups formed during yesterday’s session — the Evaluation Team, the Structural Team, and the Shared/Common Services Team — met at the conclusion of the meeting to map their work prior to the Way Forward Commission’s next meeting.

The Way Forward Commission is one of three bodies established by the 222nd General Assembly (2016) last June in Portland, Oregon. The other two are the 2020 Vision Committee and the All Agency Review Committee. Leadership of all three bodies has jointly committed to open communication and close collaboration of activity as they move through their individual initiatives.