Projects outnumber workers across the country 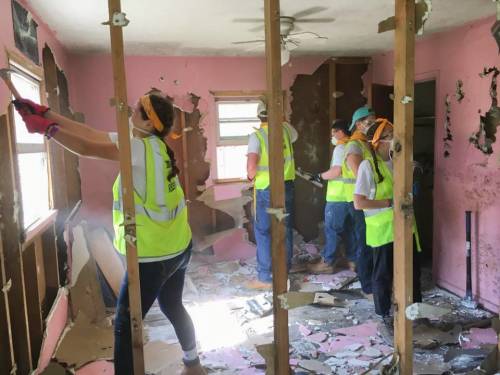 Volunteers from Westfield Presbyterian Church in New Jersey work with UMCOR (United Methodist Committee on Relief) at a home damaged by heavy rains from Hurricane Matthew in 2016. (Photo by Linnette Mercado)

LOUISVILLE – In October 2015, the South Carolina coastline was pummeled by heavy rains and flooding. A year later, Hurricane Matthew caused havoc in North Carolina damaging thousands of homes and businesses. But despite immediate response by Presbyterian Disaster Assistance and a number of other agencies, the need for clean up and repair continues in both states.

“According to what we’ve seen, the number of volunteers is not what it used to be,” said Jim Kirk, PDA’s national associate for disaster response. “It appears that the large group of people that felt called to respond to Katrina and Rita in 2005, is not available now and we need to cultivate a new group to take their place and integrate them into our opportunities for engagement.”

Coastal Carolina and New Hope Presbyteries are in the midst of long-term recovery, but thousands of homes remain damaged and in need of cleanup and repair.

“In South Carolina, there was a hurricane that never came ashore in 2015, but a rain squall just sat there over the state for five days,” said Fred Wally, a member of PDA’s National Response Team from North Carolina. “It was their thousand-year rain and there were areas of the state that had never flooded before.”

Wally says Matthew caused a similar situation a year later in North Carolina, pushing rain squalls into the eastern part of the state.

“After the rain stopped, all of this water upstream in the central part of the state began working its way down to the coast,” he said. “Even after the rain, you were looking at another day of flooding in areas that had never flooded before.”

Working with presbyteries in both states, PDA provided grants to assist immediately after the floods.

“The first thing we did was send initial response groups to all of the impacted presbyteries and determine needs,” said Wally. “We were looking primarily at damage to churches as well as impact on presbytery staff, pastors, church staff and congregations, then we began looking into larger communities.”

Working with the Federal Emergency Management Agency (FEMA) as well as other faith organizations, teams assessed the damage and provided initial clean up and support. A year to two years later, the focus is now on long-term support.

“The Carolinas are just now getting their long-term operation up and running,” said Kirk. “There’s a need for basic tear out skills now, but as this progresses, more skilled volunteer help will be needed.”

In South Carolina, host sites have been established in Columbia, Sumter, Charleston and Georgetown. In North Carolina, there are host sites in Kinston and Fayetteville.

“We used to have more volunteers than we had work, but now we are seeing the volunteer numbers go down substantially,” said Wally. “That has an impact on setting up host sites. Do we have enough volunteers to justify opening a site? Are we going to take away from one site by opening another?”

Kirk says the problem extends beyond the Carolinas. In talking with PDA partners, he says the shrinking supply of volunteers is something all agencies are facing.

“I think part of the issue is the number of very active long-term recovery sites and operations,” he said. “For instance, PDA has 32 host sites in 17 states and part of it is the sheer number of host sites competing for the same or smaller segment of volunteers.”

In North and South Carolina, most of the impacted areas from the recent floods have been in rural, low income areas. Wally says many of the homeowners didn’t have flood insurance, either because it had never flooded before or they couldn’t afford it.

“But even if you get a payout from FEMA, it may not be enough,” he said. “In North Carolina, the maximum payout from FEMA was $32,000. If your home was completely washed out, that won’t take you very far. The money needs to go toward supplies. That’s why volunteer help is so important.”

Both Kirk and Wally are encouraging churches to look at the possibility of organizing volunteer teams to get involved.

“We are looking at four to six year recoveries for both states and that can be a problem if a new disaster comes along,” said Wally. “If we can get a group to come and take interest in a particular area, they usually want to come back for years because they adopt a town or community. The key is just getting them there the first time.”

Kirk says PDA can customize a volunteer group project regardless of the group’s size.

“Another helpful way is to connect with other persons or groups who are interested in working within a particular region or presbytery,” he said. “There are numerous organizations outside the faith community who would be interested in coming together and make it work. Look to your book club, volleyball team or Bible study group – you may be surprised who wants to volunteer.”