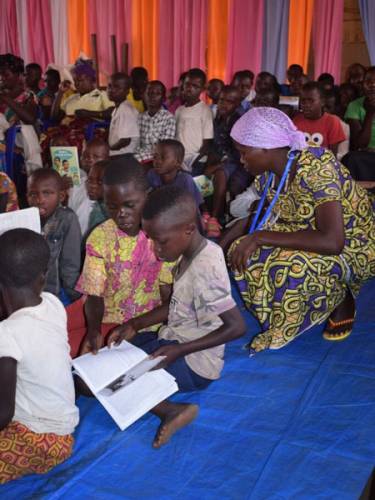 LOUISVILLE — An already bad situation in the eastern portion of the Democratic Republic of the Congo is being exacerbated by ethnic rivalries and another outbreak of Ebola, but the Presbyterian Church (U.S.A.) and its partner are supporting those who are emotionally and physically wounded.

“Congo has in recent years experienced a couple of sudden outbreaks of localized violence that in a very short time span have resulted in thousands of deaths and scores of wounded people, both physically and emotionally,” said mission co-worker Christi Boyd. “In light of those unexpected events, I fear that the escalation of violence amidst more protracted tensions may spiral down to where perpetrators lose any sense of restraint to the level and scope of their violent acts.”

The latest inter-ethnic violence is between Hema (cattle herders) and Lendu (farmers).  The simmering rivalry involves land disputes and go back decades. During the five-year war that began in 1998, thousands of people were killed.

Boyd said there is not a generalized animosity between the two ethnic groups. In fact, some Lendu protect Hema by hiding them in their homes. When they flee, they run together. It’s why there is suspicion that the conflict is instigated and fed by others to destabilize communities.

Accompanied by Boyd, PC(USA) has sponsored trainings on children’s trauma healing with its global partner, the Protestant Church of Congo (ECC), as the church addresses the violence and ministers to the survivors.

Marie Kabazaire, director of the ECC Women and Families Department in the Ituri province, was among the first facilitators of trauma healing in children. She was trained and certified in 2016-2017 through the PC(USA)’s partnership with the National Women and Families Department of the ECC. That training was the result of prioritization discussions between ECC women leaders, World Mission staff and PC(USA) constituents participating in the 2016 East Congo Travel seminar, organized by the Africa office.

Last October, Kabazaire was able to stretch a $2,000 gift from the 2016 Peace and Global Witness Offering to organize an event to train 28 new facilitators on healing children’s trauma. 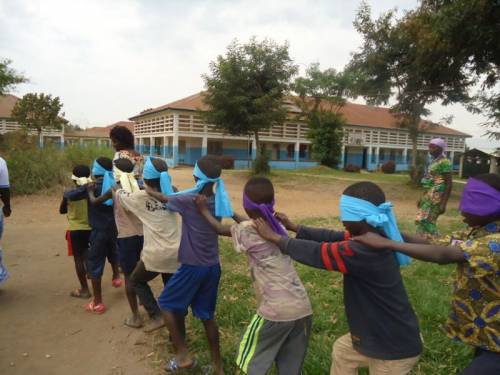 Children participate in an exercise during trauma healing. (Photo by Marie Kabazaire)

“Marie is an amazing woman,” Boyd said. “As the provincial leader of the Protestant Women in Ituri, she models what it takes to follow Christ’s teaching of Matthew 25 in today’s Congo. From one day onto the next, she strategizes with others to advocate for peace or for decision-making positions for women. She holds trainings to build women’s capacity and sensitizes communities on important issues from elections to Ebola. Or she organizes solidarity actions to meet the direct needs of vulnerable people.”

Bunia is the capital city of the Ituri Province, where most of the people fled during the fighting. The humanitarian situation in Bunia is concerning. The United Nations High Commissioner for Refugees (UNHCR) reports that those trying to reach the relative safety of sites in urban areas of the city are being blocked by armed youth from both ethnic groups, while others are trying to cross Lake Albert into Uganda.

This sudden surge of violence comes at the same time as a new outbreak of Ebola in Bunia.

Since the first cases were reported in 1976, the Democratic Republic of the Congo (DRC) has battled Ebola virus breakouts more than any other country in the world, with 10 of 25 global outbreaks recorded there. Since the third outbreak in 1995, another Presbyterian mission co-worker, Larry Sthreshley, has worked on the front lines of the fight to crush the deadly epidemic in Congo and save lives.

Just the mention of the Ebola virus sends chills down most people’s spines. Formerly known as Ebola Hemorrhagic Fever, it has a range of symptoms including fever, headache, muscle pain, diarrhea, vomiting, weight loss and bleeding, usually from the eyes. Ebola spreads among humans through close contact with the blood, body fluids, secretions or organs of an infected person, or objects contaminated by such fluids.

To complicate an already complicated situation, many in the DRC believe that health care workers have brought the virus into their country. Others believe that it’s just a ruse to make money. Still others believe it is an invention by foreign visitors to decimate the local population.

The environment is even more volatile with the presence of dozens of militia groups; health care workers in East Congo face harassment, threats and death. There have been four attacks on Ebola treatment facilities, forcing patients to flee for safety. Those conditions make it difficult to keep the virus under control. In what has become the worst outbreak since the 2014-16 epidemic in West Africa when 11,000 people died, there were 239 confirmed cases during the first three weeks of June with 1,506 deaths out of 2,239 reported cases as of June 23.

“While this Ebola outbreak does not present an immediate threat to our historic Presbyterian partners who are located in other parts of the country, members of our larger ecumenical family are facing this as yet another deadly threat to the well-being of their communities,” said mission co-worker Jeff Boyd. “It is amidst decades-long conflict, attacks by a host of competing militias, and extreme economic hardship that our sisters and brothers in faith witness by word and deed to the love of God — sometimes, to the risk of their own lives.”