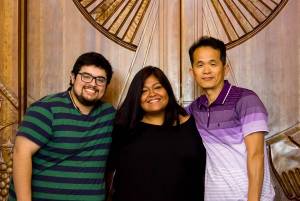 Veteran Spanish and Korean language translators, Elizabeth Vasquez and the Rev. Sunkyoo Park, understand their daily tasks—and their larger role within the Presbyterian Mission Agency (PMA)—not just as a job, but as a calling.

“I was drawn to this work because of the type of service I was yearning for,” said Vasquez, “to serve a greater good.”

Vasquez, a native of Trujillo, Peru, graduated from Indiana University. She is fluent in Spanish, French and English, and can hold a conversation in Danish. “I discovered the Presbyterian Church (U.S.A.) and all things Presbyterian while on a road trip to volunteer at a jail with three Presbyterian pastors,” she said.

As part of its response to the GA referral, the PMA worked collaboratively with the OGA to determine which documents and resources would be considered “essential.” Recognizing that interpretation of the term ”essential” could be different for both constituencies, PMA staff hosted a one-day meeting for each constituency. The participants devised a working document that outlined which existing documents and resources take precedence to be translated, and determined which future documents should be included. For both constituencies, it was imperative that the working list of information to be translated into Korean and Spanish would necessarily include all overtures submitted to the General Assembly as well as all statements and media releases produced by the Stated Clerk.

While Vasquez and Park are employed by the PMA and are housed within its Communications ministry office, the costs—and supervision—associated with their positions are shared with the OGA.

Vasquez and Park see their work as a means of promoting inclusion, welcome and participation in the mission and ministry of the Presbyterian Church (U.S.A.)

“My hope is that local pastors will take a greater interest in denominational work,” said Park, a teaching elder member of the Midwest Hanmi Presbytery, which he formerly served as stated clerk. “I especially like to translate the good news stories, so that people can see the good that the denomination is doing instead of focusing on disagreements.”

Park and Vasquez have recently welcomed a new PMA colleague in the ministry of translation. Juan David Correa—who does work similar to theirs within another area of the organization—joined the PMA staff on April 4 as copy editor/translator for Congregational Ministries Publishing (CMP) in the Theology, Formation, and Evangelism Ministry area.

Correa, a native of Bogota, Colombia, was educated at the University of Western Ontario and is currently an M.Div. student at the Southern Baptist Theological Seminary in Louisville. In his new role, Correa handles translation for very specific CMP resources, such as Growing in Grace & Gratitude and Being Reformed. He also copy edits the resources that CMP produces in Spanish.

“I am deeply committed to the mission of reaching the Hispanic world with the gospel of Jesus Christ by conveying a simple but deep theological language that transforms the faith community landscape into an educated, passionate and mission-driven people to expand the kingdom of God,” said Correa. “Toward that end, I want to ensure that the people who receive our material have high quality translations and a good base of resources.”