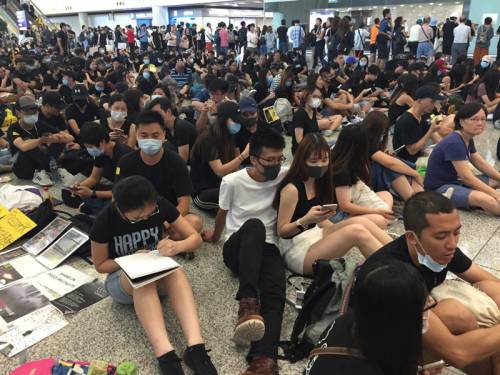 But there is still considerable unrest.

Sunday marked a peaceful protest march to the U.S. Consulate in hopes of generating support from Washington, D.C., for democratic reforms. On Monday, thousands of students formed human chains to show support for the pro-democratic protests.

Those leading the protests believe that Lam’s withdrawal of the bill is too little too late and does not address the other demands made for an independent inquiry of police actions, retraction of the term “riot” to characterize the protests, unconditional release of all who have been arrested for protesting, and dual universal suffrage, which would include the right to vote for both the Legislative Council and the Chief Executive.

The protests began on June 9 over a proposed law that would allow the Hong Kong government to send persons charged with certain crimes to mainland China. On Aug. 5, protest organizers called for a general strike in the city, which canceled many flights. Bridges, subways, tunnels and trains were also blocked.

The protests continue. Reports are that tourism, a major economic generator for Hong Kong, is down 40 percent.

Mission co-worker the Rev. Judy Chan, who serves with the Hong Kong Christian Council, a Presbyterian Church (U.S.A.) partner, says although the bill withdrawal may be too little too late, they are glad there have been first steps.

She asks for continued prayers for Hong Kong in this critical time in the country’s history and shared a Prayer of Commitment used in 72 Protestant and Catholic churches across Hong Kong on the evening of Sept. 6.

“Our theme was ‘Pray for Hong Kong: Reconciliation, Healing and a Way Out.’ These prayer meetings were jointly organized by the Hong Kong Christian Council and the Catholic Diocese of Hong Kong,” she said.

Introduction: In Hong Kong, where social turmoil has brought rapid changes,            we rely on the unchanging Triune God to make a commitment together:

Response: We are determined to be humble, gentle, patient, and tolerant, to be peaceful, to maintain the unity of the Holy Spirit (Eph. 4:2). We refuse to let political disputes or any differences to divide the body of Christ.

Leader: Over the past three months, many people in body and spirit as well as the entire society have been deeply traumatized. For this we must confess our sins and pray for one another (James 5:16).

Response: We are determined to be diligent to follow Jesus Christ to heal the wounded physically and spiritually and rely on the power of the Holy Spirit to resist the power of evil (Eph. 6:12).

Leader: Everyone is created in the image of God. Each person’s dignity must be respected.

Response: We are determined not to regard people as inhuman. We reject all words and deeds that degrade human dignity. We win through the Lord without hatred. We overcome evil with good (Romans 12:17).

Leader: The Lord commands us to do good, seek justice, rescue the oppressed, defend the orphans, and plead for the widow (Isaiah 1:17).

Response: We strive to follow the teachings of Jesus Christ and love others as ourselves. We are determined to help those who are oppressed, regardless of political views; to defend the rights and interests of the minority groups, no matter the different stances; to act justly and to love mercy and to walk humbly with our God.

Response: We strive to witness to and practice the truth, to seek and defend the truth. We are determined never to confuse right and wrong, but to be blameless and to do no harm.

Leader: In the face of the current political stalemate in Hong Kong, violence has been spreading and people are confused and fearful about their future. But we still believe that the Lord is in charge of history, and we are convinced that the Kingdom of Heaven will be fully realized.

Response: We are determined, no matter what the situation, to hold fast to our conviction that love and faithfulness will prevail over all. We will not be moved because we know that no matter what happens, nothing in all Creation can separate us from the love of God, which is in Christ Jesus our Lord (Romans 8:38-39).