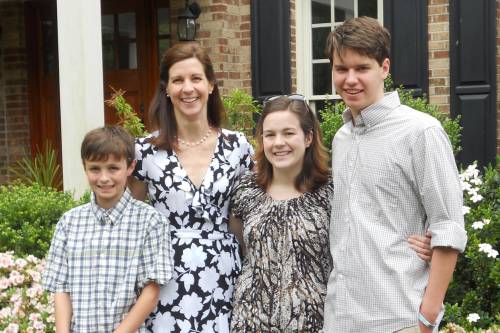 LOUISVILLE – While there may no longer be a standard path for those who enter seminary, Lucy Crain’s journey has taken her to places few will ever see. The second year student at Union Presbyterian Seminary’s satellite campus in Charlotte, North Carolina says until recently she never anticipated she’d be studying for ministry.

A child and family therapist by training, Crain and her husband of 27 years, Jim, moved to Charlotte in the late 1990s to open a Chick-fil-A restaurant. She left her therapy practice and together they ran the restaurant together for 14 years, Jim working the “back of the house” and kitchen, and she working on the customer side.

“I wasn’t looking for any sort of career change because I really thought [running the restaurant] took both of us,” she says. That is, until tragedy struck the family.

“Our son was hit on his way to school one day,” she recalls, detailing the February 2012 auto collision that would change so many things for the Crain family. “He wasn’t supposed to wake up from the coma or wake up with any cognitive ability.”

Hospitalized for 77 days, Crain’s son Thomas had suffered a traumatic brain injury (TBI), requiring round the clock care and careful monitoring of his progress during his time in the hospital and throughout recovery. It was an exhausting job and Crain left the restaurant to care for her son.

Covenant Presbyterian Church, the Crains’ church, is within walking distance of CNC Medical Center where Thomas was hospitalized. The family frequently used the church as a place to rest and refresh between hospital visits and the hundreds of post-hospitalization therapy appointments.

“They loved us so well through that – in 100 different ways,” she says of the church’s support that included prayer vigils, visitation, decorating Thomas’ hospital room and more. 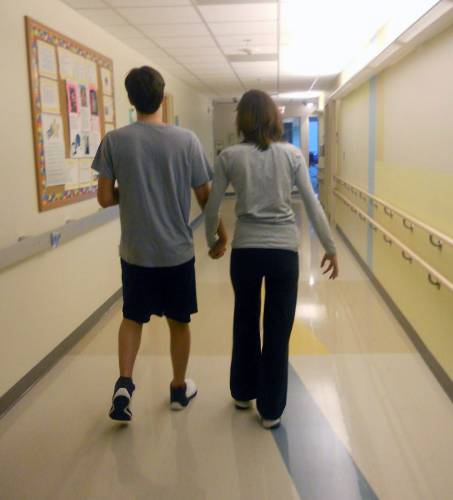 Thomas takes his first steps down the hospital hallway with Lucy the Saturday before Easter, 2012. (Photo provided.)

Thomas awoke from his coma the Saturday before Easter [2012] and senior minister Bob Henderson changed his Easter sermon at the last minute to feature a picture of Crain and Thomas walking down the hallway of the hospital. Crain says it was a true resurrection moment for the church that had followed Thomas’ hospitalization and her journey with him.

Crain decided not to return to work at the restaurant and began volunteering at Covenant as a Stephens Minister. Within months, the church administrator asked Crain to come work at the church as the executive assistant to the senior minister.

Her son Thomas had taken a medical deferment and entered Carolina in the fall of 2013, a year after he was scheduled to start, so Crain agreed to temporarily work at the church as the executive assistant. Three years later, she says, “I’m still there. That became permanent.”

As Henderson was preparing to take sabbatical leave, Crain approached him and said she was interested in taking a class at Union’s Charlotte campus. Henderson’s response, she says was, “What the heck took you so long? It’s obviously where you’ve been headed since you came to work here.”

Crain enrolled part time at Union’s Charlotte campus in the fall of 2015, dipping her toe in the water with one course initially. Her first course was “Christian Encounters with World Religions,” where her class visited a mosque, Buddhist temple, Sikh house of worship, among others.

“I fell in love with studying about it, learning about it and writing about it,” she says enthusiastically. “I wrote my first research paper in 30 years and then decided to enroll full time.”

“I’d never thought of ministry as a goal,” Crain says of her career aspirations, quickly adding that she’s still unsure. “In fact, I feel wigged out about saying it’s a goal now. People ask, ‘Aren’t you in seminary?’ And I say, ‘I’m taking some classes.’

“I’m not taking them with any other goal in my head other than that nagging voice that kept saying, ‘You’ve got to go to seminary,’” she says. “I’m not going for a particular job or direction, I’m just being way more open to where God is leading me than where I used to be.”

Richard Boyce, dean of Union’s Charlotte campus, says the schools unique nature as the only part-time, non-residential seminary in the Presbyterian Church (U.S.A.) is an advantage to the church.

“Most of our students are engaged vocationally Monday to Friday in some other kind of work,” he says. “The vast majority of them are bound for Sunday activities as well. We spend all day Saturday – between their weekday vocational lives and their church vocational lives – and it’s a great context for learning.

“The gap between the church and the world is very small for these students,” Boyce continues. “They’re constantly reflecting on how and what they learn will affect their work in the church the next day and how it helps them understand what they’ve been doing out in the world during the week.”

According to statistics compiled by the Association of Theological Schools (ATS), alternatives to full-time residential theological education programs are on the rise. Although enrollment in U.S. seminaries has dropped by roughly 10 percent in the period between 2004 and 2014, enrollment in programs like the one offered at Union’s Charlotte campus have grown by five percent.

“A good majority of our students may not end up in full time church work, and they may not even end up in vocations we’ve traditionally identified as church work,” says Boyce, noting a possible shift in coursework and degrees needed to serve the needs of the 80 current students in the Charlotte program.

“Lucy [Crain] is an example of this very story,” he says. “She’s had a long-term job out in the world but is now doing very vital church work and who knows what she’ll do when she graduates. She may not have to shift vocationally, yet this seminary training, I hope, will have a large impact on what she’s allowed to do and what she’s able to do in this same vocational location.

“She brings that real-life experience and practice to the classroom. We have great students. Many are there to learn for learning’s sake. But they’re also there for practical reasons. They want to think an live their faith, immediately.”

Crain insists her transition to seminary isn’t unique among her peers, but agrees that her classmates bring extraordinary gifts from their experiences. “Everybody at Union Presbyterian Seminary – especially at Union Charlotte, because it’s adult education – has crazy interesting stories about what brought them there.”