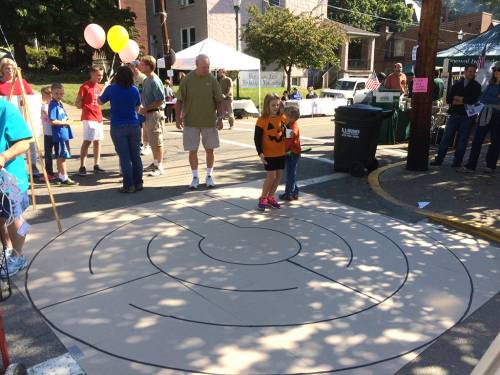 Members of Emsworth United Presbyterian Church, one of the congregations who participated in The Unglued Church, created a prayer labyrinth at a community fair to introduce their neighbors to the spiritual practice. Children especially loved the ‘maze where nobody can get lost!’ Photo by Susan Rothenberg

This article originally appeared in the July/August 2016 issue of Presbyterians Today.

PITTSBURGH – When Sarah Robbins accepted her first call, at Dormont Presbyterian Church in Pittsburgh, she knew it would be a challenge. The church had been experiencing declining membership, deteriorating facilities, and dwindling finances. While she hoped that she might bring new life to the congregation, she realized that couldn’t happen unless she talked about death and resurrection.

“It was my first call, and the church needed to have some hard conversations and make some huge decisions about its future. I wasn’t trained to deal with that, and so I was reading everything I could, asking advice from colleagues and seeking out the great minds who were asking the hard questions about what to do with declining churches,” she says.

While she received a lot of thoughtful suggestions, what she didn’t find was a process for dealing with the critical questions. There were no mentors who could help her have conversations with people who were grieving as the church was shrinking. So she headed into what felt like uncharted territory and explored what a faithful response to the situation might be.

And she decided that nobody should have to face those questions alone. Other churches should not be left to feel as if they were stuck in a corner alone, fearing death and unable to describe what resurrection looks like.

So Robbins met up with Susan Rothenberg, another pastor in Pittsburgh Presbytery, and together they started the Unglued Church, a program to help churches that have become stuck—stuck in their old ways, stuck in old buildings, stuck in a corner feeling alone, or stuck in a mindset that tells them they have failed.

Since then, six ruling elders and teaching elders have joined the Unglued team, including Ayana Teter, associate minister for outreach in Pittsburgh Presbytery. The team’s work is supported by colleagues and resources from the Presbyterian Mission Agency and the Presbyterian Foundation.

“As a denomination with many declining churches, we have to get good at doing this,” Robbins says. “We have to be comfortable talking about what death looks like and the many different ways churches can respond faithfully and experience resurrection.”

Sometimes resurrection looks like renewal. But other times, resurrection is using the remaining energy and resources to help create new life elsewhere—through a church merger, allowing a new congregation to use the building, or donating an endowment to a group that does the work of Christ in the world. Unglued helps churches see that they must pass through death to experience resurrection—even if it’s the death of their own expectations.

“Many congregations are locked in buildings that they love, but upkeep and maintenance are sucking up dollars and energy that could otherwise be directed toward mission and ministry,” Rothenberg says. “The hope of Unglued is to help churches reject ‘survival logic’ that focuses on keeping the building open and move into a resurrection mindset that puts their resources to work in the world.”

Rothenberg says some churches are asking faithful questions about their mission and their ministry. Instead of ignoring decline or denying death, they choose to focus on what their lasting legacy will be. Many have made the shift from thinking of the church as a building for them to believing that the church is the body of Christ for the world. They are willing to let their dreams die in order to give new life somewhere else.

“So many people in our congregations see the changes in church and culture and are paralyzed by them,” Teter says. “We pair them with people who have made this journey with their church and help them to map a way forward in ministry, not just maintaining a building.”

Teter laughs uncomfortably when asked if she feels as if the Unglued Church group is full of visionary people.

“We are not the visionaries,” she says. “We just walk with congregations and help them make strategic decisions that are in line with our true visionary, Jesus Christ.”