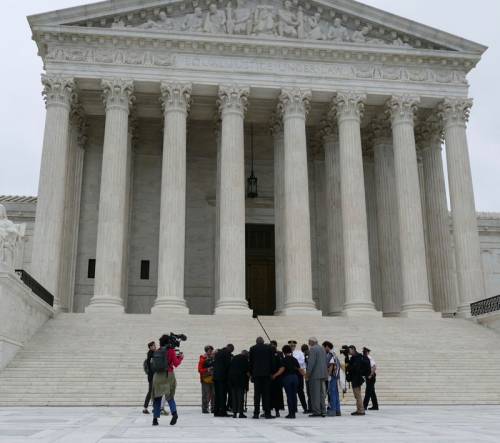 Last week the U.S. Supreme Court denied an application for a stay of proceedings in a defamation case filed by a former PC(USA) A Corporation employee. (Photo by Jessica Palatucci)

LOUISVILLE — The U.S. Supreme Court has denied an application for a stay of proceedings in a defamation case filed by a former Presbyterian Church (U.S.A.) A Corporation employee. The May 30 ruling allows the case to proceed in Jefferson Circuit Court in Louisville.

Two weeks ago, Louisville attorney John O. Sheller, the PC(USA) A Corporation’s outside counsel, asked the U.S. Supreme Court for a stay of proceedings in the trial court in Louisville. The PC(USA) A Corporation was appealing a Kentucky Supreme Court ruling in the defamation case brought by the Rev. Eric Hoey, a former Presbyterian Mission Agency employee. In September, Kentucky’s highest court ordered the case returned to Jefferson Circuit Court.

At issue is whether a civil court should preside over a defamation case in which the court will be asked to review and interpret internal church doctrine. Sheller based the argument for a stay on the ecclesiastical abstention doctrine. Under that doctrine, courts abstain from hearing claims in which they are required to adjudicate controversies over religious doctrine.

Hoey alleges that the Church defamed him by publishing that he had engaged in “unethical” conduct as a minister. Hoey is one of four employees placed on paid administrative leave in 2014 during an independent investigation into the establishment of an unauthorized nonprofit corporation, the Presbyterian Centers for New Church Innovation Inc. As of June 1, 2015, the four were no longer employed by the Presbyterian Mission Agency.

In a similar defamation case brought by Hoey’s colleague, the Rev. Roger Dermody, the Kentucky Court of Appeals last year unanimously affirmed a Jefferson Circuit Court ruling that said that Dermody’s dismissal was a matter of “internal doctrinal affairs” and not subject to state interference.