Faith-based organizations shouldn’t shy away from conflict, consultant tells ‘A Matter of Faith’ 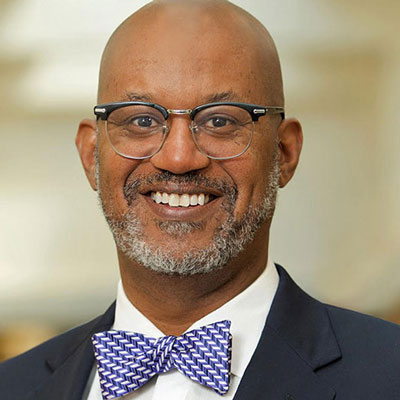 “There’s a Christian narrative that says people should get along and go together, but conflict itself is excellent. It’s necessary to advance,” Hooker said last week during “A Matter of Faith: A Presby Podcast,” hosted each week by Simon Doong, mission specialist in the Presbyterian Peacemaking Program, and the Rev. Lee Catoe, editor of Unbound: An Interactive Journal of Christian Social Justice. “Usually, though, what happens is people make conflict personal. We say, ‘There’s a problem between us’ or ‘There’s a problem with you if you don’t agree with me.’ But conflict can show up from so many places. There’s structural conflict, interest and values differences, history — all of those can be sources of conflict that have nothing to do with relationships.”

Hooker, the principal and founder of Counterstories Consulting LLC, worked with Presbyterian Mission Agency leaders for about 18 months to help redesign the structure and purpose of the agency to better carry out the Matthew 25 vision. Listen to Hooker’s conversation with Catoe and Doong here. Hooker enters the conversation in the 29th minute.

Responding to a question from a podcast listener, Hooker spoke to Catoe and Doong on how churches can better manage internal conflict.

“The first thing to do is to figure out what we are conflicting about,” Hooker said. “Do we have two different ideas that are both trying to compel us going forward? If that’s the case, then great. Let’s look at them to see what’s possible and what there is to mine from these different ideas that will allow us to go forward” or to “find a third idea that wasn’t necessarily articulated in either of ours but is going to allow us to move forward.”

“What often happens, though, is the way to try to resolve those conflicts is by power. … We use power-based rules, “Robert’s Rules of Order” and other kinds of deception. We withhold our resources to force people to accept our idea. … How do we find a space where we can all flourish?”

“The idea, I think, is that faith-based organizations are trying to create spaces for more and more people to be able to flourish, and so we have to look at what of your idea advances the possibility for many of us to flourish and what of my idea does that, and how do we take on those ideas within the constraints of our system?”

When two ideas vie to share the same space, it might be wise to shake up the space a bit.

“None of those structures are organic or naturally existing or divinely ordained,” Hooker said. “They are because we created them, and so how do we reimagine our structures in order to allow more people to flourish, to allow a thousand flowers to bloom?”

“People come in and say, ‘If you were being the church, you wouldn’t do it this way’ — which is really my narrative of what it means to be church and not necessarily a shared narrative or an agreed narrative about being church.”

However, as Doong pointed out, “faith-based organizations also need financial resources to continue being the church.”

“How do you see them doing the work in the community,” Doong asked Hooker, “while making sure there is enough money to do said work?”

Often what happens, Hooker said, is “We have values but we allow those values to be forwarded only if there is someone willing to pay for them. Often it’s the case that the conditions we are trying to change have made possible the profit that other people have to now spend.”

“The question is, are we inviting the people who are profiting from injustice to be the ones to determine the proper valuation for the justice that we’re seeking?” Hooker asked. “Sometimes you have to do things without necessarily getting the financial support. … If people aren’t willing to pay for that, it’s probably because that’s not a world they have imagined for themselves.”

“The thing with faith-based organizations is that you have to stake a claim,” Hooker said. “You have to say that whether people are willing to pay for this or not, this is our commitment. … How do we agree that our commitment is to a transformed world and then figure out what is necessary to support that and make that go forward? It may not be to the liking of those who have the most resources.”

The Presbyterian system, Catoe said, is designed so that we hear many different voices, such as when a church’s music director feels empowered to speak with the pastor over hymn selections. There are, of course, thousands of these conversations occurring daily across the PC(USA). “I’ve never seen so many people get so upset,” Catoe said, “over the color of the carpet.”

While we may think of those as petty arguments, “the music director and the pastor are in conflict because more people will remember the songs they sang [during worship] than the word that’s preached,” Hooker said. “There is an intense theological conflict, and the way the music creates the context determines what kind of church it is and what kind of experience people are having.”

“The way you get past the petty,” Hooker said, “is to say, ‘What is the aesthetic? What is the feel? What is the experience that we want people to have had when they leave [worship]?’”

“Very few conflicts that are happening now started now,” Hooker said. He recalled years ago mediating a conflict within a congregation where a member wanted to donate enough money so the church could install at Hammond B-3 organ. The church had a pipe organ, but the member also wanted the Hammond.

“Some of the older people were saying, ‘What kind of people would we be if we were a church that allowed a Hammond? Hammonds are also played at blues clubs. What would that say about what we believe?’”

It fell to Hooker “to unpack the narrative and how it shapes and reshapes our identity. What are the facts we’re debating? We might actually agree on the facts. What are the feelings that we’re having because of that? How’s it shaping the identity of who we are? If you can unpack those three things — facts, feelings and identity — and look for the history of the conflict, you get much closer to an understanding of what the actual debate is.”

“That’s the simplest, quickest way to help people to unpack the kinds of conflicts they’re leaning into,” Hooker said.