Make A Donation Click Here >
Home › Toward a new vision

NEW YORK – The Way Forward Commission has begun to discern next steps for its work – including considering some issues it may be able to act on quickly, and starting to figure out how to organize its longer-term work.

Part of the conversation is structural: for example, deciding what kind of subgroups to establish to work from now until the board’s next meeting (via conference call) on Feb. 7.

But the structural nuts and bolts all link back to deeper concerns about how the denomination functions – such as when commission member Eileen Lindner, a teaching elder from New Jersey, said the intent of considering a potential polity change would be to “take a look at access to the places that allow people to lead and participate fully in the life of the church.”

In several instances, while discussing what needs to change, commission members raised questions of how seriously the Presbyterian Church (U.S.A.) is taking its work with people of color. 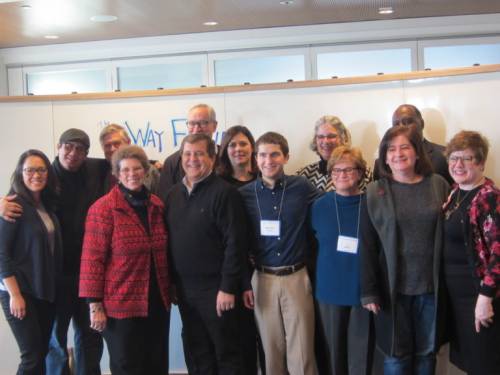 Group photo of the Way Forward Commission (minus Emily Marie Williams, who had to leave) and support staff. (Photo by Leslie Scanlon)

“The fact that Latinos and Hispanics are the largest minority and we have no funding to hire anybody … this just doesn’t make sense,” said Adan Mairena, a new church development pastor from Philadelphia.

Eliana Maxim, a mid council executive from Seattle, questioned the terminology of “racial ethnic ministries” in the PC(USA) structure. “It’s this – pardon the language – little ghettoized area where they put all the black people and all the brown people and throw in a couple of people of color to lead them, and say ‘we’re doing good work.’ ”

The commission has a broad mandate, and a big job.

The 2016 General Assembly of the Presbyterian Church (U.S.A.) created the 12-member Way Forward Commission to “study and identify a vision for the structure and function of the General Assembly entities of the PC(USA).”

By creating a commission – rather than a committee or task force – the assembly gave the Way Forward the authority to act. And the commission’s first meeting, held Dec. 12-13 at Auburn Seminary in New York, gave the sense the commission is perfectly willing to do that, when the time and the issues seem right.

SUBGROUPS
For now, the commission decided to set up four subgroups to work between now and Feb. 7.

One-topic issues. One subgroup will initiate exploratory conversations involving focused issues – the terms “isolated” and “one-topic” were used – that the commission wants to investigate. To start with, those conversations would be: 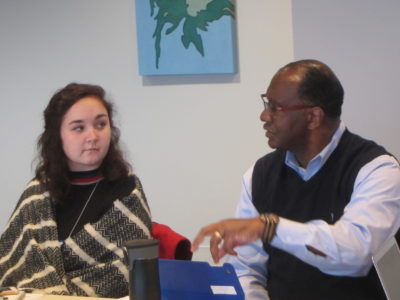 Part of the intent, said Mark Hostetter, a teaching elder from New York who is the commission’s moderator, is to put those agencies “on notice” that the commission will be considering the work of all six PC(USA) agencies, not just the Presbyterian Mission Agency (PMA) and the Office of the General Assembly (OGA).

By having those conversations, “there should be no surprises for anybody,” said Samuel Bonner, a ruling elder from the Presbytery of New Brunswick.

Quick fixes. A second subgroup will work on issues that already have been identified as potential “quick fixes,” or things the commission could address quickly. Between now and the next meeting, the subgroup intends to have conversations with church leaders to take a look at what might be done, or is already being done, regarding concerns in these areas: 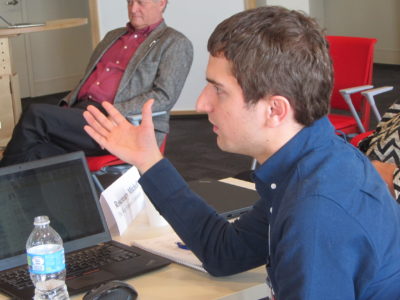 Some of these conversations aren’t new – the report of the PMA Review Committee, in particular, which went to the 2016 General Assembly, raised some of them. The assembly responded to that committee report and other items by creating the Way Forward Commission. So now, the commission is interested in pushing some of these matters forward – to see what can be done.

Over the next month or so, commission members will contact leaders involved with the work to say, “These are the topics we’re looking at,” Hostetter said. “What do you think about these areas? How do you think you’d begin to answer these things?” In essence, “we’re identifying the issues” on which the commission wants to see some action soon.

“We’re not hitting the ball, we’re teeing it up,” Lindner said. The expectation is not necessarily that the subgroup will accomplish the work by Feb. 7 or that “we demand that you fix this now.” But with focused conversation, the subgroup “might have real concrete recommendations” by the February meeting of what to do next, Lindner said.

Models and steps. A third subgroup will work on laying a foundation for the commission to address other issues that may take longer. The intent would be to create a project management plan for addressing bigger issues regarding PC(USA) structures and staffing, Hostetter said.

That could include identifying best practices, including strategies from other denominations and nonprofits; coming up with a timeline for action; and considering what role the PC(USA) should or could play in the public square during a time of intense political disagreement.

External input. A fourth subgroup will work on setting a format for the commission to gather input and ideas from the broader church. The rough plan agreed upon at Auburn was for the commission to set up an email address and develop a questionnaire (with a set length limit for responses) that Presbyterians could use to communicate briefly their concerns to the commission.

The commission also agreed that it would ask for particular pieces of information – ranging from grants made to new worshipping communities to demographic information about congregations and leadership.

The commission discussed (but did not make final decisions on) how it might want to use social media – including possibly a Facebook page or a website connected to the PC(USA) on which resources related to the commission’s work might be posted.

The commission also made a commitment to promptly translate its work product, including press releases and other announcements, into Korean and Spanish.

FINANCES AND CONSULTANTS
On the last day of its meeting, the commission discussed a range of other concerns – including whether to use a consultant – possibly paid or a Presbyterian consultant willing to volunteer. No decisions were made on that.

Pushed by Mairena, who raised questions about how far the money will go, commission members discussed finances. The General Assembly authorized a budget of $60,000 for the Way Forward’s two years of work, and Hostetter said it costs an estimated $12,000 to $15,000 for each face-to-face meeting (three more are scheduled). 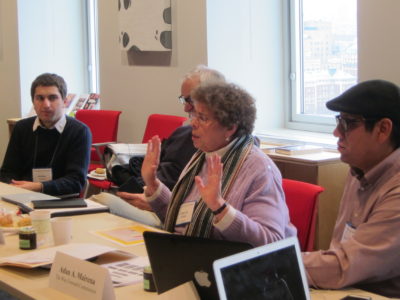 One of Mairena’s questions was whether the commission will have enough money left to hire a consultant if the members feel they need one – and, as a new church development pastor involved in urban ministry, he asked the question in the context of raising the issue that some commission members may have difficulty taking big chunks of time from their jobs or ministry work to do intensive work for two years on behalf of the commission.

One of the questions is “Who’s going to do the actual work?” of trying to identify and design the best structure and function for the denomination, said Jo Stewart, a ruling elder from Charlotte. Will the commission use a consultant? What is expected of each committee member? “What are the logistics of how we do this work?”

Mairena also raised the question of how the commission can move forward past talk and recommendations to “a sense of urgency” – so the commission’s work doesn’t become just another report.

While the commission needs to be prudent and responsible in handling its finances, Hostetter said he expects that “the money will be available if we need it.”

The members agreed to revisit the question of budget and finances at each meeting.

THE PUBLIC SQUARE
Lindner also raised a concern about the national context in which the commission is beginning its work.

“We are a major church in the most powerful nation in the world that is about to undergo an enormous sea change,” when Donald Trump becomes president in January, she said. “Somewhere in our process we have to think about our church in America” – the new America that’s emerging, Lindner said. 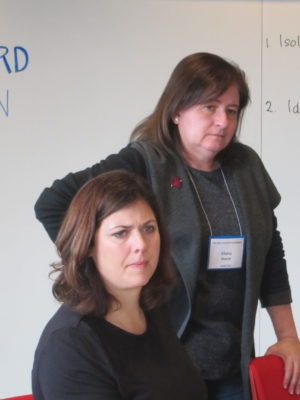 The danger is that “we have our heads so deeply in the stands of structural concerns … that we miss the fact that our neighbors went away last night at the behest of our government,” or that children have lost their access to health care.

Maxim said the PC(USA) is still relying on an old narrative, and “somewhere we need to declare what the new story is. … The face of our denomination has changed. Our story has changed. Our country has changed. Overnight we went from having one perception of who we are as Americans to waking up” with a new reality.

That sense of the PC(USA) needing to find a new narrative may be a point of intersection between the work of the Way Forward Commission and the 2020 Vision Team, which

the 2016 assembly also created, instructing it to set a new vision for the denomination by 2020, a guiding statement that “will help us to name and claim our denominational identity as we seek to follow the Spirit into the future.”

The 2020 Vision Team has not yet begun meeting, but Hostetter said he intends to speak soon with the leadership of both that group and the All Agency Review Committee, which will review the interactions of the PC(USA)’s six agencies as a part of the denomination’s regular review process.

Hostetter said he would communicate to the 2020 Vision Team that “this is an urgent thing that seems to be right down your alley,” as it considers issues of PC(USA) identity and purpose. And members of the Way Forward Commission indicated the commission might address the denomination’s role in the public square and as a “prophetic voice” as well.

NEXT MEETINGS
The commission also set up this schedule for its upcoming meetings – with some details (such as exact locations) still being worked out.

The commission’s meetings are generally open to the public (including conference calls), although the members may vote to hold some closed sessions.