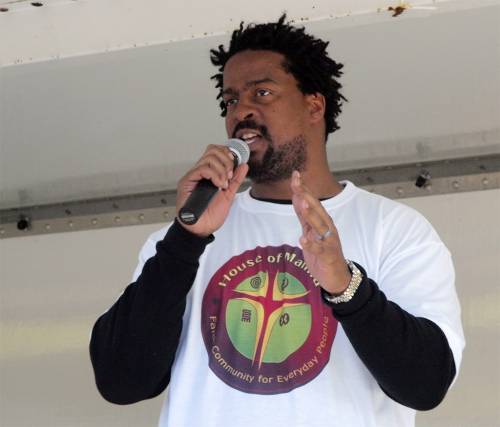 LOUISVILLE – The Rev. Eugene Blackwell died yesterday following complications from bone cancer. He was 43. A graduate of Pittsburgh Theological Seminary, he served as founding pastor of House of Manna in Pittsburgh beginning in 2009, and as assistant minister to North Way Christian Community.

Blackwell arrived in Pittsburgh from Chicago on a football scholarship, playing defense for the University of Pittsburgh where he received his Bachelor of Science, with a minor in African American Studies. Hearing God’s call, he quit the football team to pursue ministry.

With a passion for hands-on community ministry, Blackwell was known as a champion of the “physical, mental, and spiritual, empowerment of the disenfranchised communities of our nation” who created “a church for everyday people.”

Blackwell’s wife, Dina “Free” Blackwell, is Executive Director of Homewood Renaissance Association, a project designed to create a community hub in the Homewood neighborhood of Pittsburgh. House of Manna occupies space in the Homewood Renaissance Association building, a gift from Dollar Bank, which is in the early stages of development. Worship services began meeting there on Easter, 2016.

Blackwell, also known as “Freedom” because it reminded him of the tireless work of securing freedom for others, was a co-author of and Pittsburgh Presbytery’s overture advocate for “The plight of the African-American Male” resolution presented this past summer to and approved by the 222nd General Assembly of the Presbyterian Church (U.S.A.)

“He stood bravely in Committee 10 on one leg, making a fervent appeal that [the General Assembly] adopt this overture,” said Sheldon Sorge, General Minister of Pittsburgh Presbytery. “He had been suffering from osteosarcoma for nearly three years, losing his left leg late last year. The cancer was metastasizing as we gathered in Portland, but he kept the faith even though he was unable to sleep or eat. Following GA, his physical condition deteriorated even as his faith remained strong, until early this morning he joined the Church Triumphant. His earthly battles are done, while ours continue as we move forward to engage the challenge our church has set before us.” 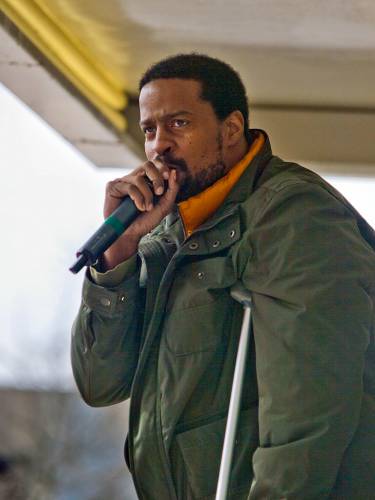 Blackwell’s longtime mentor the Rev. Dr. Johnnie Monroe, retired pastor of Grace Memorial Presbyterian Church in Pittsburgh, met Blackwell and his wife prior to their calls to ministry. Monroe said Blackwell was a champion of reconciliation in the Homewood neighborhood.

“But hopefully what we’re going to gain is some feet under his vision,” Monroe continued. “Where his vision becomes a reality. Where his ministry and life will live on. He had a great legacy.

“We talk about longevity and long life, but he’s a great example of how it’s not how long we live, but how well we live. He made a great contribution to our church, to our Pittsburgh Presbytery, and the community in Homewood where God placed him.”

The Rev. Dr. Rhashell Hunter, director of Racial Ethnic and Women’s Ministries at the PC(USA), was a staff resource to the overture from Pittsburgh Presbytery. She shared the microphone as Blackwell presented his case to the committee.

“It was clear to me that Freedom cared deeply, as I do, about the dire situation that many African American males find themselves in and the need for the whole church to step up and address racial justice inequities,” said Hunter. “He practiced good cultural humility, and as members of the committee wrestled with how to best respond to this overture. I am grateful Freedom was able to attend General Assembly and be, in essence, our teacher. His advocacy and ministry was a gift to our church.”

Blackwell is survived by his wife and five children: sons Canaan and Elisha, and daughters Elizabeth, Alexis and Jessyca.

The Home Going Celebration for Pastor Freedom Blackwell will be held Friday, September 9 at 11am at House of Manna, 7240 Frankstown Ave., Pittsburgh. Viewing/visiting hours are Wednesday, September 7 and Thursday, September 8 from 11am-1pm and 4pm to 7pm both days.