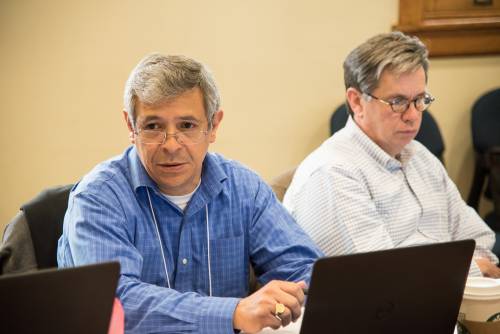 Ruling Elder Marco Grimaldo of National Capital Presbytery, at left, is co-chair of the Moving Forward Implementation Commission. Seated at his left is Jim Wilson, a ruling elder and former member of the All Agency Review Committee. (Photo by Gregg Brekke)

The 12-member, two-year commission, created by the 2018 General Assembly to carry out recommendations of the Way Forward Commission and those of other groups regarding such goals as transparency and cost-sharing, met for nearly an hour by video conference Monday evening to, among other tasks, talk about what the commission hopes to accomplish.

Part of that discussion, said the commission’s co-chair, Marco Grimaldo, a ruling elder from National Capital Presbytery, will be over deciding the commission’s role as it works alongside the board of directors of the A Corporation, the corporate entity of the Presbyterian Church (U.S.A.).

“I don’t think they’re done laying out a map of what’s ahead for them,” said Grimaldo, who along with the commission’s other co-chair, the Rev. Larryetta Ellis of Presbytery of West Virginia, chatted briefly with the A Corp’s board last week. The A Corp board is also looking at shared services and the Diverse Voices Table created by the 2018 General Assembly.

“The action of the General Assembly is the main piece of work we are responsible for. How we achieve that is open to debate,” Grimaldo said. “I’m not ready to say, ‘Hey, this is the way to go.’ That’s up to the commission to decide.”

“Those of us who were on the Way Forward Commission know that it was two years of a lot of effort and expansive thinking,” said the Rev. Cliff Lyda, who’s serving an interim ministry in the same Presbytery of St. Augustine church he served as installed pastor about 30 years ago.

Because the General Assembly gave the group commission status, “it feels like we have some muscle and some expectations,” Lyda said. “If things aren’t moving along well, we’ll be called upon to exert some pressure.” While commission members will “need to do some schooling” over their role alongside other groups such as the A Corp board, “we will have a guiding hand and an enforcement hand,” Lyda said.

Commissioner Mathew Eardley, a ruling elder from The Presbytery of Boise, said that some tasks will require “hands-on work,”  while in other cases “we will rely on the A Corp board.”

“We need to have a clear definition” of what other entities are doing, said Jackie Cummings, a ruling elder and the treasurer for Presbytery of South Louisiana. As well, “we need to understand our mandate.”

Commissioners decided by consensus to meet in Louisville for two days in mid-January, with dates still to be worked out.

“I notice we are not alone,” Ellis said near the conclusion of the conference call, noting there are “all types of agencies, acronyms, commissions and committees — and even Presbyterian staff — to help us.

“I’d like us to remember,” she added with a smile, “that when we get frustrated and we want to say choice words to members of our commission, say them with love.”