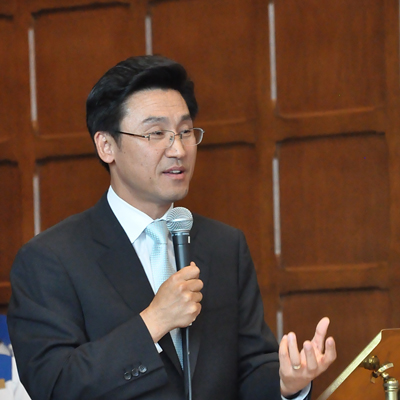 LOUISVILLE — Over the past year about 3,800 hate attacks were recorded against Asian Americans. According to research by the Center for the Study of Hate and Extremism at California State University, San Bernardino, attacks increased by 150% in 2020.

In March following the mass shooting in Atlanta, where a lone gunman is accused of killing eight individuals, including six Asian women, the National Caucus of Korean Presbyterian Churches (NCKPC) issued a statement denouncing violence against Asian Americans.

Most recently, the NCKPC has written a letter to members of Congress and is encouraging all Presbyterians to join in contacting their local, state and national elected officials to seek systemic change through legislation to protect Asian Americans.

The Rev. Byeong-Ho Choi, pastor of Bethany Presbyterian Church in Marietta, Georgia, and moderator of the NCKPC, says the group decided this was the right time to write to elected officials.

“It has been good to see the Asian American and Pacific Islander (AAPI) community demonstrating and protesting to raise its voice against bias crimes,” said Choi. “With more exposure and awareness to experiences of the AAPI, the NCKPC determined it was the right time to write to elected officials to seek systemic change through legislation and magnify the movement.”

The NCKPC is urging legislation for more stringent anti-bias laws in addition to increased security measures in areas with increased AAPI demographics. Choi says the hope for these measures is to promote racial unity and peace while denouncing racism and hate crimes.

Choi noted that in addition to the NCKPC and the National Asian Presbyterian Council, many non-Presbyterian congregations, AAPI politicians, and anti-Asian American hate organizations have joined the NCKPC’s campaign efforts. “We are confident that the other caucuses of the PC(USA) will respond positively to the invitation we sent them to stand with us,” he said.

Recalling another time in history when the attacks on Asian Americans have also been blatant and vicious, Choi commented on the 1992 Los Angeles riots. “The police brutality toward Rodney King triggered the 12th riot in Los Angeles that lasted from April 29 to May 4,” he said. “Fifty-three people were killed, several thousand injured, and financial loss and damages amounted to $1 billion. During the riot, Korean American-owned small businesses were attacked, looted, razed and burned by rioters.”

“Korean American small business owners sustained 45% of the total losses, nearing half of a billion dollars. The business owners and their families not only sustained material losses but they also had their American dream shattered,” said Choi.

“Many left Los Angeles with nothing and dispersed throughout the United States. It is outrageous that in 2021, the AAPI are facing significantly increased rates of hate crimes in this country and must fear for their safety. Many of the AAPI are American citizens, naturalized having left their homeland and pledging allegiance to this nation, or they were born here. Yet racists and bigots menace and scream, ‘Go back home!’”

Ever the “perpetual foreigner,” this experience “is heartbreaking and frightening to the AAPI,” he said.

Choi says the Presbyterian Church (U.S.A.) has a clear vision on dismantling racism based on the Bible, specifically Matthew 25. “The PC(USA) is rightly pioneering and living into and putting the practices of Matthew 25 into action by focusing on forgiveness, love, and reconciliation and building up the kingdom of God without racism,” he said.

When asked what people can do to become allies of the Asian American and Pacific Islander community, Choi answered, “Individuals can pray, listen, and learn, send an encouraging letter and stand with and act for the AAPI movements in their local communities. Seeing and hearing the AAPI will help fight against the image of the ‘perpetual foreigner.’”

The NCKPC Moderator said, “Over 30,000 American soldiers fought and died in the Korean War from 1950-53, defending the freedom and liberties of Korea. Regarding faith, American missionaries, many who were martyred, helped to spread the Word of God throughout Korea. Koreans and Korean Americans have a deep sense of gratitude toward the United States. Yet the racism and bias crimes that Korean Americans face along with the AAPI is heartbreaking.”

“Thus, the NKCPC speaks out and seeks to take action, seeking justice, reconciliation, forgiveness, peace and unity in this country in the footsteps of its Lord and Savior, Jesus Christ.”

The letter from the NCKPC Executive Board:

With the recent spa shootings in Atlanta resulting in the murders of six Asian-American women and the brutal attack of a 65-year-old Filipino woman in Manhattan, violence against the Asian American/Pacific-Islander (AAPI) community has become more pronounced. While these crimes were more widely covered by national media, they are only the tip of the iceberg.

In 2020, there were 3,800 reported incidents of hate against members of the AAPI community. Even though hate crimes had declined by 7% overall between 2019 and 2020, it actually increased 150% against AAPI people. Making matters worse, most of the incidents targeted women.

The NCKPC acknowledges the different histories and experiences of racism against Black, Indigenous, and People of Color (BIPOC) in the United States. When the NCKPC protests racism against the AAPI, it does so with the understanding that it does not diminish any other BIPOC voice. Regardless of who is targeted, racism is deplorable.

As a Christian organization, the NCKPC promotes the peace and unity of all people regardless of race, creed or color. It expressly rejects the attempts to pit any POC against another, such as Blacks against Korean Americans, in an attempt to diminish the call to end racism in the United States. The NCKPC denounces all forms and expressions of racism.

According to the Census Bureau, the AAPI population is 23 million and is the fastest growing group in the United States. The NCKPC is proud to be included among this group of Americans. On behalf of the Korean American members of 350 congregations spread throughout this great nation, we call on our governmental leaders to do the following:

We ask you to SEE us and HEAR us. The NCKPC continues to pray for your good work and leadership.