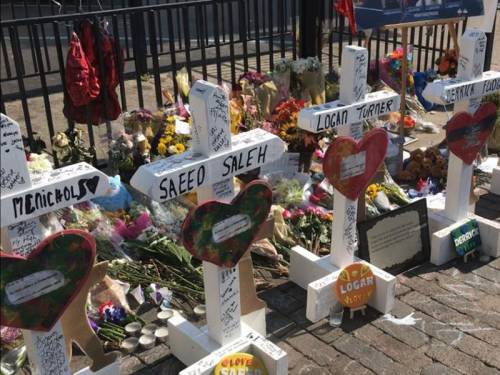 Crosses honoring the lives of the nine people killed in the Aug. 4 mass shooting in Dayton were part of a makeshift memorial in the city’s Oregon District. (Photo by Deangelo Byrd, courtesy of Cox Media Group Ohio)

LOUISVILLE — In 32 seconds, a lone gunman in downtown Dayton, Ohio, injured 27 people and killed nine, including his sister. This mass shooting happened back to back with another shooting 13 hours earlier on Aug. 3 at a Walmart in El Paso, Texas. In that rampage, 22 people died and 26 were injured.

Just a few weeks before the Dayton shooting, 15 tornadoes — up to EF4 level with winds speeds of 166-200 miles per hour — ripped through the Miami Valley of Ohio on Memorial Day, causing one fatality and extensive damage or complete destruction of 3,500-4,000 homes, schools and businesses. The community hadn’t seen anything like it since the Xenia Tornado (1974), in which 12 tornadoes touched down, killing 36 people.

For a community to face natural disaster and human-caused disaster in such a short time is not common, but it has happened before, said the Rev. Katherine “Cully” Culpepper, a member of the Presbyterian Disaster Assistance National Response Team and leader of the NRT’s deployment in Dayton, referring to a mass shooting and wildfires in Thousand Oaks, California, and a school shooting and devasting hurricane in Parkland, Florida, all in 2018.

Culpepper and the Rev. Ed Spence, a PDA National Response Team member who lives in Arizona, were deployed to Dayton following the Aug. 4 mass shooting. PDA was already assisting with tornado recovery efforts through a grant when the second trauma occurred. Trauma has many layers, said Culpepper. “The layers will be different than if the disaster were one or the other. I’m not sure how it will unfold.”

The Rev. Jim Kirk, PDA’s associate for disaster response in the U.S., has served in recovery efforts in both natural and human caused disasters since PDA established the National Response Team in 1995. His first deployment for a human-caused disaster — and PDA’s first official deployment for a human-caused disaster — was the mass shooting at Columbine High School in Colorado 20 years ago. PDA accompanied the community of Littleton for more than a year after that tragedy, Kirk said.

“That was a time when the thinking was that it [Columbine] was the ‘storm of the century,’ and [that things like it] might happen once every 100 years,” Kirk said. “Yet, since the fall of 2017, we’ve had four of the 10 deadliest mass shootings in the United States. That’s in addition to the daily destruction, death and injury caused by gun violence that does not get reported widely.”

More than 9,500 people have died from gun violence in the U.S. already this year, according to GunViolenceArchive.org, a not-for-profit corporation formed in 2013 to provide online public access to accurate information about gun-related violence in the United States. “This is what befuddles me,” Kirk said. “The argument is made that we need to arm people so they can defend themselves, yet, at least according to this site, more people were killed in unintentional shootings than were killed in the course of self-defense.”

Every disaster is local, Culpepper explained. “Every disaster is impacted by the kind of local resources that are brought to bear. Dayton certainly has wonderful resources. PDA will be involved for the long haul, as we always are in communities, both with the tornado response and the followup to the events of the shootings.” In describing how a National Response Team works, Culpepper said, “We go in at the invitation of the mid council to be present with folks in the difficult times. We remind them to be kind with themselves and kind with one another, to do the things they need to do to take care of themselves, to stay connected to their communities.”

“PDA’s initial focus is working with the faith community, not just clergy but also local church leaders, such as elders, deacons, Stephen Ministers and community leaders,” Kirk said. “We don’t respond to every disaster. We show up by invitation, and where we have a role we respond.” The National Response Team has about 100 trained responders, Kirk said. Fortunately, thus far, there has not been a time when there were no available team members to send when invited after a disaster — although the hurricane season of 2017–18 was quite challenging, he said.

Culpepper has served in disaster response since 2011. “We know meaningful relationships help us heal when we are hurt,” she said. “We encourage them to give themselves space to begin to, slowly and over years, discern some meaning. You know these things never make sense; they never will make sense.” 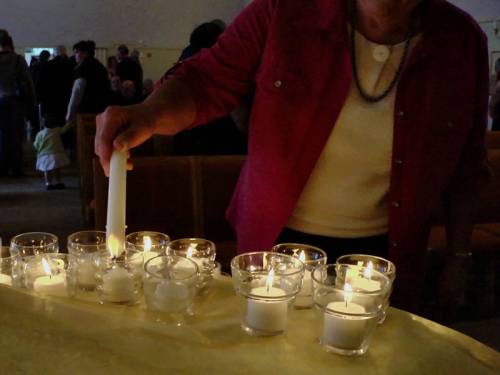 This photo is taken from the Presbyterian Disaster Assistance film, “Tapestry: Reweaving the Fabric of Community after Public Violence.” (Photo courtesy of PDA)

Several of those who were murdered in Dayton had direct connections to those who had been working night and day on long-term recovery after the tornadoes, Culpepper said.

“We tend to think about these events in terms of the impact being primarily for the families and friends of those who died and/or those who were wounded, and certainly the responders on the scene, trying to deal with the situation. Yet, there are always ripple effects with these things. It takes time for folks to deal with the trauma in their own way and at their own pace.”

The human-caused disaster response team of Culpepper and Spence were deployed by Presbyterian Disaster Assistance to the Presbytery of Miami Valley Aug. 11–14. The presbytery has 8,400 members in 49 congregations throughout 12 counties in southwestern Ohio. “We visited with individuals, made connections to PDA partners in disaster response, checked in with the Red Cross and mental health agencies working in the Oregon District (where the shooting occurred), because we all want to work together and be aware of what we are doing,” Culpepper said. The team also held gatherings at Westminster Presbyterian Church in downtown Dayton and in Bellbrook, the community were the shooter and his sister were from. “We did this to invite people in to gather and have conversations as a group or one on one,” Culpepper said. “People don’t have a choice about what happens to them, but they do have choices about how they make meaning. The stories we tell when these things happen help. People can find their way to a better place, but it takes a long time.”

Folks on the edge of the ripple may not feel it as strongly initially, but something about it gets to them. “Eventually, hopefully, all of us get to a point of a new normal or a wiser way of living,” Culpepper said.

Sally Dyer, a National Response Team member with PDA who lives in Dayton, was not part of the mass shooting response team because PDA does not typically call upon response team members to serve during catastrophic events in their own presbytery. However, Dyer’s good working relationships through her work in the church and volunteer service in the community helped Culpepper and Spence make the connections they needed quickly after they arrived, Culpepper said.

“With a natural disaster there is a warning,” Culpepper said. “But with a human-caused disaster, no matter what it is, we know that those largely occur without warning.” With gun safety, Culpepper explained that the unfortunate thing is that we can’t seem to have an open conversation about all the reasons gun violence continues to occur. “Until we are able to do that, we are going to be at risk of these kinds of things,” she said.

American culture tends to expect people to get over things in a hurry, Culpepper said. “We expect quick solutions, and we expect a quick resolution. But these are the kinds of things that people don’t get over — like a death in the family. You feel it always.”

“What comes with the emotional impact of a situation like this is a sense of betrayal,” Culpepper said. “That the person or persons who are responsible have betrayed their communities, that is a very difficult thing to grapple with.”

The Flint, Michigan, water crisis is one example of a human-caused disaster that has resulted in feelings of betrayal, she said.

“It is a privilege to be invited into people’s lives in difficult times,” Culpepper said. “We rely on God and each other. When we go out, we are always assigned a ‘care buddy,’ someone who is not in the field that we check in with. We know we have colleagues who are praying for us and folks we can access if we need resources while we are in the field.”

Will Dayton rebound from this double punch of natural disaster and human-caused disaster?

“In Dayton, the community as a whole is great at building resilience,” Culpepper said. “Even though the wound is deep, their compassion seems to be deeper.”

Presbyterian Disaster Assistance is able to quickly respond to natural and human-caused disasters because of gifts to One Great Hour of Sharing and designated giving. For more information about the ministry of PDA, visit pda.pcusa.org or call 800-728-7228, ext. 5806.

Presbyterian Disaster Assistance, the emergency and refugee program of the Presbyterian Church (U.S.A.), enables congregations and mission partners of the PC(USA) to witness to the healing love of Christ. PDA works with partners around the globe to support those impacted by natural or human-caused disasters.

Jim Kirk is the Associate for Disaster Response in the U.S. for Presbyterian Disaster Assistance. He trains, recruits, coordinates and manages the PDA National Response Team. He works with middle governing bodies to enable response to disasters in their area and tracks PDA’s national responses. He also oversees PDA equipment and operations at the PDA National Call Center/Warehouse.

The Rev. Katherine N. Culpepper has served as a member of the National Response Team for Presbyterian Disaster Assistance since 2011, responding to both natural and human-caused disasters. She was ordained in the PC(USA) in 1985 and has served in congregational, presbytery and camp and conference ministries as a transitional ministry specialist.

The Rev. Ed Spence is a member of the National Response Team for Presbyterian Disaster Assistance.

How PDA Responds to Public Violence

“Trigger: The Ripple Effect of Gun Violence,” a documentary that discusses gun violence as a disaster and public health issue.

“Tapestry: Reweaving the Fabric of Community after Public Violence,” a film and study guide