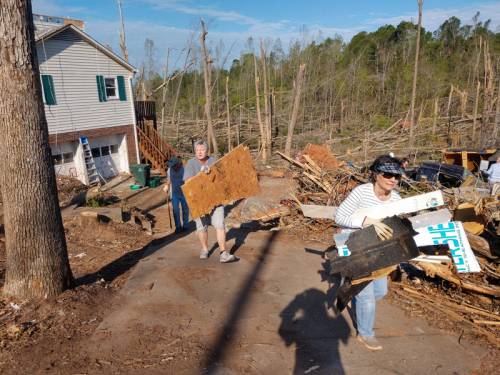 LOUISVILLE — Disaster relief volunteers Richard and Susan Caldwell had been praying about their mission work and where God would lead them to when fate stepped in.

Tornadoes tore through their state the morning after Easter, sparing their South Carolina home but leaving extensive damage just blocks from their church, Seneca Presbyterian Church, and killing one person.

The Caldwells quickly mobilized, seeking help with things like debris clearing and tree cutting for affected residents. The response was swift and strong.

“Last Friday, we had 30 people show up,” said Richard Caldwell, a parish associate at the Seneca, S.C., church.

These are “a great bunch of people,” primarily church members and their families, and they’re “doing a lot of hard manual work,” he said.

The effort in Oconee County is taking place at a time when traditional deployments of PDA’s National Response Team are on hold because of the coronavirus pandemic.

PDA’s approximately 40 volunteer host sites remain closed through at least June as the country works to slow the spread of the contagious virus.

However, National Response Team member Rick Turner has been virtually deployed to help with coordination from his home, about 30 miles from the cleanup.

Turner is working with Foothills Presbytery, which Seneca Presbyterian Church is part of, on obtaining PDA grants and collaborating with the Caldwells. 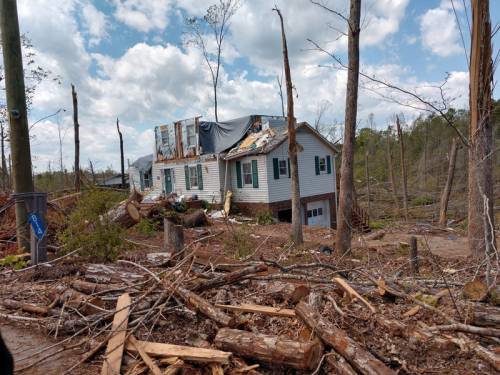 An elderly couple barely made it to their basement before a tornado hit this home. It’s one of the sites where volunteers from Seneca Presbyterian Church have been working. (Contributed photo)

At least 1,478 homes in 22 counties sustained some type of damage, according to local emergency managers. Many residents, including Seneca’s pastor, John Hartman, had downed trees. The church also sustained some damage — relatively mild compared to some homeowners’ — as did nearby Townville Presbyterian Church, which had some roof damage. In addition, a columbarium was hit by a tree.

The Caldwells, who have experience from participating in Hurricane Sandy relief efforts in New Jersey, will be ready to receive Gift of the Heart Kits, which are flood buckets and hygiene kits for volunteers and survivors, Turner said.

Also, “a number of churches have contacted us, either through the Seneca church or through the presbytery, to send in food and supplies,” he said.

Jim Kirk, the Associate for Disaster Response in the United States, praised the South Carolina effort and noted that other volunteer efforts are taking place elsewhere in the country, such as Mississippi, Tennessee and Indiana.

“Now more than ever we need Presbyterians who are local to stand up and get involved in ways that are safe and appropriate,” Kirk said. “In finding new ways to be the church, local volunteers have risen to the occasion and this is an opportunity for Presbyterians across the country to step forward and be the hands and feet of Christ.”

For many, the COVID-19 pandemic is just one of the disasters they are facing.

One challenge during the era of COVID-19: physical distancing.

“When you’re sawing trees and hauling off limbs, sometimes you get closer than six feet,” Richard Caldwell said. “We’re trying to remind people.”

Kirk noted, “If you live in an area recently affected by a disaster or (that) is still involved in long-term rebuilding and are able to volunteer locally, PDA strongly encourages individuals to follow the guidelines set by the local government officials, the Centers for Disease Control and Prevention, and the World Health Organization. We recognize that volunteer labor is crucial after a disaster, but we need to be mindful against creating another disaster by potentially spreading COVID-19.” 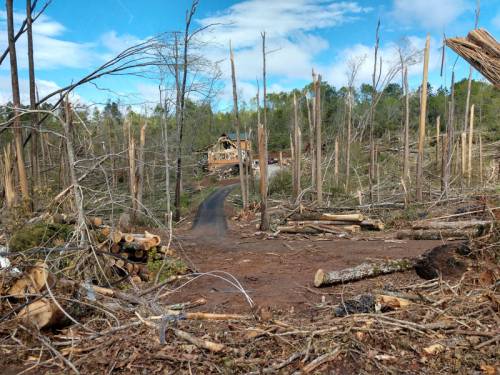 This is typical of tornado damage in Seneca, South Carolina. (Contributed photo)

To support PDA’s response to this disaster, designate gifts to DR000015.