The church is responding to the Syria-Turkey earthquake, GIVE NOW!
Make A Donation Click Here >
Home › Thespian couple dramatizes story of peace at Shelter Island Presbyterian Church on Long Island

A ‘Christmas Truce’ is shared with community 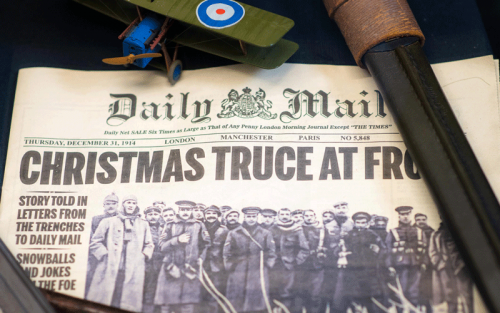 There is a World War I story of enemies laying down their weapons for a night of peace. That story made headlines and has been captured in a play that a couple at Shelter Island Presbyterian Church in New York brought to their congregation and community. (Contributed photo)

In a time of war, it’s hard to believe in a night where all can be calm and bright — let alone holy. But for the German and English troops hunkering in the muddy trenches on the Western Front during World War I, a miracle occurred.

On Christmas Eve 1914, enemies laid down their weapons and picked up a soccer ball for a friendly match. Christmas carols echoed through the dangerous space between the trenches known as “no man’s land.” Soldiers, who just hours before would have taken any opportunity to shoot, embraced a fleeting moment of peace, sharing stories with one another along with drinks from canteens. What happened that night would come to be known as the “Christmas Truce” — one of the most storied wartime accounts that have captured the imaginations of playwrights and musicians alike.

So, imagine Terry and Kathy Brockbank’s surprise when they first encountered the events of the truce in the way of a 2005 film called “Joyeux Noël.”

“I remember thinking what a moving story that we hardly hear about,” said Terry.

Then in 2016, the couple, who have roots in the theater, dividing their time between their Manhattan apartment and their home in Shelter Island, New York, attended a production of the “Christmas Truce” at a local playhouse in Quogue, New York. They later would see a production of it in New York City.

By then the story entered deep into their thespian hearts. They knew they had to share it with others.

Terry contacted a director friend, inquiring where he could obtain a script. When the script was in their hands, the Brockbanks were moved to have learned that the words were taken from transcripts of conversations recorded that very night.

“To be reading the words spoken by the soldiers added depth to the accounts,” said Kathy.

The Brockbanks knew where they wanted to share the story of the Christmas truce. It was for them the perfect venue: Shelter Island Presbyterian Church.

Members of the church that was established on New York’s Long Island in 1743, the couple has been sharing their gifts of theater for years by organizing Christmas readings.

“We can’t cook like many folks often do for their churches,” Kathy said, laughing. “But we can share our love of the theater.”

The Brockbanks admit they have a “file stashed with Christmas readings,” among them the classic go-tos such as O. Henry’s “The Gift of the Magi,” a short story first published in 1905 about a young husband and wife and how they deal with the challenge of buying secret Christmas gifts for each other with very little money.

“People love hearing that story. They also enjoy being read to,” said Kathy.

With their decision to offer the “Christmas Truce” to the Shelter Island community, the Brockbanks had to overcome one challenge: finding multiple voices to read the parts.

“Often the stories we narrate are meant for just the two of us,” said Kathy. But the Brockbanks soon mustered eight volunteers.

On the day of the event early last December, the “troops” were scattered in the sanctuary, with those representing the Germans on one side and the English on the other. Kathy narrated from the pulpit. The reading then ended with a local musician and his wife playing a ballad on both the guitar and piano called “Christmas in the Trenches,” which was written by the award-winning folk singer John McCutcheon.

“It was the perfect way to end the telling of the story,” said Terry, adding that it was also a God moment that the performance even happened. Turns out, someone who had heard of the Brockbanks’ plan to read the “Christmas Truce” called Terry to tell him about the ballad, and then they offered to perform it.

During the reception that followed, many commented to the Brockbanks how thankful they were to have learned about this piece of history.

“Some have heard of these events back on Christmas Eve 1914, while many others had not,” said Kathy. “We felt it was important to bring this to people’s attention. We need to hear the message of peace being possible.”

According to the Brockbanks, what makes this truce even more powerful is that on Dec. 7, 1914, Pope Benedict XV suggested a Christmas cease-fire, but the warring countries refused to heed that suggestion. The soldiers, though, declared their own unofficial truce.

“It just goes to show you that all things are possible,” said Terry.

Yes, all things are possible — even peace amid enemies.

There is, though, a sobering reminder of how not all seek peace in this world.

The Brockbanks said that lurking in the “Christmas Truce” transcripts is a line in which a young German witnessing the truce scolded his fellow soldiers, saying, “Such a thing should not happen in wartime. Have you no sense of honor left?”