Make A Donation Click Here >
Home › The Rev. Dr. Michael W. Waters, author of a pair of acclaimed children’s books, gets APCE annual event off to a thoughtful start

The Association of Partners in Christian Education is meeting this week in Birmingham, Alabama 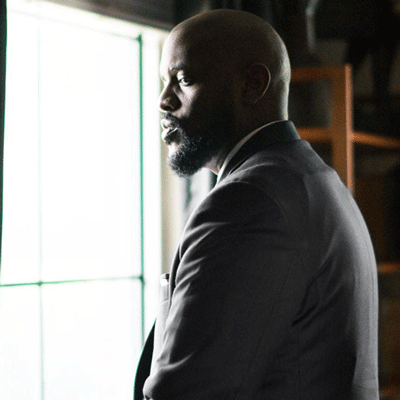 LOUISVILLE — The Rev. Dr. Michael W. Waters, whose “For Beautiful Black Boys Who Believe in a Better World” and “Liberty’s Civil Rights Road Trip” were both published by Flyaway Books, an imprint of the Presbyterian Publishing Corporation, appeared Wednesday as part of the Association of Partners in Christian Education’s annual event being held in Birmingham, Alabama.

The Rev. Dr. Elizabeth Caldwell interviewed Waters during the 90-minute session, which was also offered as part of the gathering’s online slate.

Waters, who’s also a pastor and is the father of four children — Jeremiah, Hope, Liberty and Justice — said he never aspired to write children’s books. However, “there is a constant inquiry young people engage in,” beginning in his case with his oldest child, Jeremiah, who’s now 16. The questions Jeremiah posed of Waters and his wife following the murder of George Floyd laid the groundwork for writing “For Beautiful Black Boys Who Believe in a Better World.” After the family attended a vigil for a young person about Jeremiah’s age who’d been killed, Jeremiah “came into our bedroom and went into this litany of lament,” his father said. “He said, ‘I’m tired of people killing each other. Is there anything we can do?’”

Waters got the draft manuscript of the book to his friend, the Rev. Laura Mariko Cheifetz, who messaged him 10 minutes later, saying, “Mike, I’m crying. We’ve got to do this.” David Dobson, president and publisher of Westminster John Knox Press and Flyaway Books, reached out to the Muhammad Ali Center in Louisville to develop the book’s online guide.

“It all originated with the voice of our son,” Waters told Caldwell. “I felt more like a reporter or a recorder. Sharing our experiences as a family led to this book.”

As a result of the social justice work Waters does, “our children have met some incredible people,” he said. The two people still alive who were with the Rev. Dr. Martin Luther King, Jr., on the day he was assassinated in Memphis, Ambassador Andrew Young and the Rev. Jesse Jackson, spoke to the Waters family on the 50th anniversary of the King assassination in 2018. “There’s this sense of the great cloud of witnesses. We are committed to the ongoing work of justice,” Waters said of his family, including the children. “Certainly, things still trouble them, but they understand we change the world through our works.”

For the last 18 years or so, Waters has led Dallas-area groups on civil rights tours of Mississippi and Alabama. Many, he said, were born years or even decades after the movement began. “I thought it would be amazing to take people born after the movement to meet people involved in the movement,” he told Caldwell. “That’s where it began.”

At that point of their time together, Caldwell asked Waters to read “Liberty’s Civil Rights Road Trip,” which Waters said was inspired by that 50th anniversary pilgrimage in 2018.

“The inspiration for that book was seeing those spaces through children’s eyes, which radically transformed every space we were in,” he said. “I was mesmerized by their courage.”

The tour included Medgar Evers’ home in Jackson, Mississippi, which was specially designed to protect Evers and his family from harm. He was assassinated one night when Evers forgot to turn the porch light off. “Assassins had been waiting for some time,” Waters noted.

His daughter, Liberty, the namesake for the book, got to meet civil rights pioneer Ruby Bridges, a hero in her own right who watched as Liberty autographed books detailing the family’s trip along the Civil Rights Trail. “It’s amazing,” Waters said, “how young children can be an inspiration to other young children.”

Most impactful for Liberty was the four girls killed during the Sept. 15, 1963, bombing of the Sixteenth Street Baptist Church in Birmingham. Liberty got to meet one of the survivors, Sarah Collins-Rudolph, who lost an eye in the bombing.

“She’s probably the most courageous woman I’ve ever met, a woman who loves everybody,” Waters said. “How?” Caldwell wondered. “It’s a deep and abiding trust in God. You don’t accidently get there,” Waters replied. “It’s soul work. You love your enemies and pray for people who harm you.” One can still see the scar tissue around her eye, he said. “For years after the bombing, debris that had blown into her skin would surface. It would literally have her experience the pain all over again.”

Waters places the late U.S. Rep. John Lewis in the same category. “It is similar to Christ. I don’t want to deify them, but you can see the wounds they bore on our behalf. I always want to uplift their stories, because too quickly we forget.”

As to why he’ll continue to write and publish, “I very much believe I have been entrusted with these stories and been gifted to access that very few people have,” Waters said. “That gives me the responsibility to share these stories to make sure we act.” A dear friend, a rabbi in Dallas, once reminded Waters that the most repeated command in the Torah is “Remember.”

“We co-labor with God to bring hope into harrowing spaces,” he said. “No matter how dark the time might be, there’s still hope for change. That’s my North Star.”

“I still believe there is divine activity that manifests through human activity,” Waters said. “God chooses women, children, men and communities to bring about change in the world. I am always encouraged when I see people believing the same.

“The arc of the moral universe only bends,” he said, paraphrasing King, “when you bend it.”