The author of 13 books founded what would become Mary’s Place, which provides 141,000 overnight stays annually 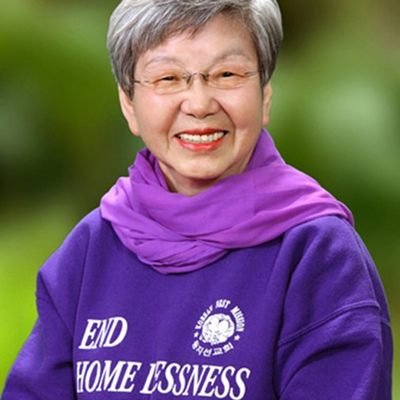 The Rev. Dr. Jean Kim (photo courtesy of the Jean Kim Foundation for the Homeless Education)

Her memorial service will be held at 10 a.m. Pacific Time Saturday, July 17, at Maplewood Presbyterian Church, 19523 84th Avenue W. in Edmonds, Washington. The service will be livestreamed here and here.

“Jean deeply impacted me by how she led her life,” said the Rev. Jinsuk Kim, associate executive presbyter to Korean Ministries in the Presbytery of the Northwest Coast. “Her purpose of life was clear as she was often explicit about it: to live for the homeless and vulnerable. And she was fully committed to it and did all she could with everything available to her until the last day, marked by writing her 13th book to educate us of the root cause of homelessness and what to do about it.”

According to the Jean Kim Foundation for the Homeless Education, which Kim founded in 2015, Kim was a “lifelong advocate for the homeless and has tirelessly advocated for a strong PC(USA) commitment to ending homelessness. She helped spearhead the passage of General Assembly overtures on ending homelessness and subsequently spoke on behalf of Presbyterian Women and the Presbyterian Hunger Program” in churches across the country from 1998-2004.

On her 80th birthday she received financial gifts from 200 of her friends and was “determined to put those gifts to use to help poor and homeless people meet their basic human needs,” the foundation noted. Their gifts led to the creation of the foundation that bears her name.

According to a remembrance published Thursday by the Seattle Times, Kim was born in 1935 in an apple orchard in a small town in North Korea. She and her family escaped south in 1946 as political strife enveloped the Korean Peninsula in the aftermath of World War II. Although it was wintertime, the family fled on foot.

She immigrated to the United States in 1970 and became a Presbyterian pastor and social worker. Nine years later she founded the Church of Mary Magdalene, a nondenominational church for women experiencing homelessness. It continues today as Mary’s Place, which last year provided more than 141,000 overnight stays, served more than 424,000 meals and ministered to 1,225 children.

“When Rev. Kim started the Church of Mary Magdalene, she brought the gift of healing through music to the group,” Mary’s Place said in a statement. “Today, the Homeless Women’s Choir still sings every Saturday for weekly worship at the Mary’s Place Day Center in the lower level of Gethsemane Lutheran Church in downtown Seattle. She gave women new lingerie to allow them to feel some dignity.” It noted she wore a purple shirt every day featuring a message to “End Homelessness.”

“She understood the impacts of systemic racism and knew that the real work of ending homelessness was about political will and economic policy changes,” Mary’s Place said. “She said, ‘Root causes of homelessness are based on racial disparities and historic institutional racism. For instance, behavioral health services for people of color have been almost non-existent along with affordable housing.’”

“We are so grateful for her work that has helped so many and we will miss her indefatigable spirit,” Mary’s Place said. “She encouraged and inspired us all to do more, give more and love more.”

“I am one of the millions of lives saved by the sacrifice of American solders in the Korean War. I cannot take for granted the abundant blessings I have received in this country, and it is my honor to repay the assistance I have received here. I serve as a voice of our homeless friends whom I love and serve. They speak through my voice and I speak from their pain-stricken broken hearts.

“In 1935 I was born as the last of three children into a wealthy family in North Korea. I was raised like a little princess: eating special food, wearing beautiful clothes and living in three beautiful homes. But emotionally my childhood was drowned in my mother’s tears, grief and anguish as an eyewitness to my father’s abuse.”

After arriving in South Korea in 1946, Kim’s refugee family “was reduced to poverty and homelessness.”

After high school Kim earned two bachelor’s degrees, in theology and English literature. When she arrived in the U.S. in her mid-30s, “I found a land in which everything was entirely different: beautiful, comfortable and with abundant resources. There was a promise of the American Dream for anyone who wanted it.” But Kim feared pursuing that dream would distance her from Jesus, “who lived, loved, served and died homeless, leaving his legacy for us to follow. I did no want to let go of the image of Jesus which inspired me profoundly ever since my teen years.”

Despite leaving her family of birth behind in South Korea, “my husband, I and our two sons were hopeful and happy to build our life anew in the U.S.” But eight years into their time in the U.S., her 17-year-old son died. “I still feel like a piece of shrapnel got stuck in my heart,” she wrote. She urged God to “take my life. Cancel my existence and blot me out of this world. Let the Earth open its mouth to swallow me. Don’t love me, forgive me, feel sorry for me, comfort me or save me.”

“Despite my struggle, God grabbed me tight and wouldn’t let me go,” she wrote. “God’s steadfastness and perseverance won the fight over me.” Ever since, “if God says ‘go,’ I go. If God says ‘do,’ I do. Therefore, I no longer exist for myself. If I live, I live for God. If I die, I die for God.”

“In all my professional life of serving poor and homeless people, I have carried this belief: Had they acquired college education and job skills, they wouldn’t have to depend on welfare and food stamps,” Kim wrote. “We are living in a day and age that will not allow us to survive if we don’t get an education.”

Kim said she urges “my homeless friends to pursue and enhance their education.” Her own higher education includes a Master of Social Work from St. Louis University, a Master of Divinity from Fuller Theological Seminary during the 1980s and the Doctor of Ministry degree she earned from San Francisco Theological Seminary at age 71. Her 300-page dissertation became the basis for five of her 13 books.

“I got a wonderfully thorough education,” she wrote, “and it is my turn to provide educational opportunities for my dear homeless friends.”

As she lay in a hospital bed a year after her ordination, Kim contemplated a dream God had given her the night before. In the dream, the Almighty instructed her to develop a ministry for women experiencing homelessness. God told her to plant a cross that “will grow through the roof,” Kim wrote.

“’Planting the cross’ meant not the dead wooden cross but planting the living cross that represents all who Jesus is: his absolute love, care, compassion, forgiveness, sacrifice, emptying, sharing and hope for the most poor, homeless and excluded ones.”

“So my mission is planting the cross in the souls of my homeless friends and supporters as well,” Kim wrote. “Thanks be to God!”