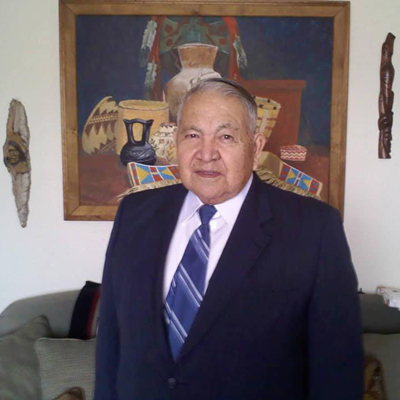 LOUISVILLE — The Rev. Dr. Cecil Corbett, a retired pastor and former president and chancellor at Cook College and Theological School in Tempe, Arizona, died on Sept. 7 of COVID-19.  He was 89.

Even in retirement, Corbett most recently served as a member of the Presbyterian Mission Agency Board and as an itinerant preacher. He was a member of the Presbytery of the Inland Northwest’s Committee on Ministry and vice-chair of the Native Missions Consortium and Program Committee of the Vancouver School of Theology in Vancouver, British Columbia, Canada. He previously served as vice-chair of the General Assembly Mission Council (now the Committee on the Office of the General Assembly) and chair of Racial Ethnic Ministries.

He belonged to First Indian Presbyterian Church in Kamiah, Idaho; Presbytery of Inland Northwest; and the Synod of Alaska-Northwest.

Corbett earned his bachelor’s degree from Huron Community Campus in Huron, South Dakota, and his Master of Divinity from the University of Dubuque Theological Seminary.

The Rev. Irvin Porter, Associate for Native American Intercultural Congregational Support for the Presbyterian Mission Agency, said of Corbett, “Cecil has always been a mentor to me in ministry, committee work and certainly since I became Associate for Native American Intercultural Congregational Support. Most recently, at a meeting of Native Presbyterian elders who have worked for the denomination, he shared stories and information which will help Native leaders who come after us.”

“I was honored that he spoke at my ordination in 2003 about the importance of Native American ministers in the church,” Porter said. “Cecil was my third cousin. His father, Frank, was my grandfather, Richard Moffett’s first cousin. Cecil leaves not only an empty chair at the tables of family, friends and the Presbyterian Church (U.S.A.), but in the many lives he has touched through his ministry and thoughtfulness.”

Ruling Elder Elona Street-Stewart, Co-Moderator the 224th General Assembly (2020) and the first Native American to lead a synod, said that first as a committee member and then as the chair of a General Assembly committee, the Council on Church and Race, Corbett was very engaged and instrumental in resourcing and writing policy.

“Cecil invited me to join in some early work on environmental justice issues,” said Street-Stewart.  “Together we traveled into the Rocky Mountains area and down into the Southwest to look at the issues of uranium mine tailings and toxic waste sites on the reservations. From that we produced a report for the General Assembly.

“I traveled with him. I remember when we met with the Council of Energy Resource Tribes (CERT), I just felt about three inches tall. Everybody knew Cecil and his presence was one where he could just recall policies.  I felt very honored to be the person that was accompanying him to go and do these visits with the tribes and hear what their records showed and their experiences.”

“Cecil always wore a bolo tie,” Street-Stewart recalled. “He was Mr. Cook School, Mr. Indian Presbyterian. He always had knowledge of not only what was going to be happening like in the next year or so in the church, but he could relate that information to things that had happened in the past.”

Street-Stewart say Corbett was a great teacher and administrator. “He was like a historian for us because he had all of this information in his head,” she said. “He also knew how to organize that information in ways that would be most helpful at the time.”

“I am grateful to have known Cecil and served alongside him,” said the Rev. Dr. Diane Moffett, president and executive director of the Presbyterian Mission Agency. “He made a difference in more lives than we will ever know. He was a servant who loved God and worked to improve the quality of life for Native Americans and people of color. Well done, thou good and faithful servant, well done.”