The Rev. Irvin Porter, the PC(USA)’s liaison to 97 Native American congregations, offers words of challenge and thanksgiving on Between Two Pulpits 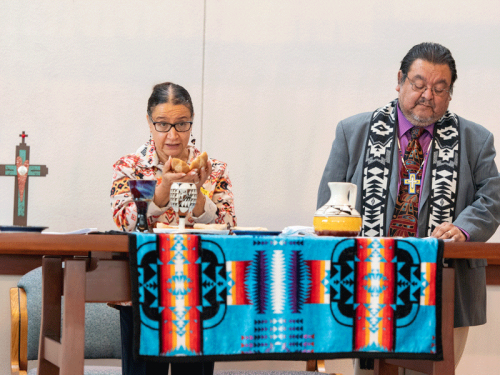 LOUISVILLE — The Rev. Irvin Porter, associate for Native American Intercultural Congregational Support in the office of Racial Equity & Women’s Intercultural Ministries, has offered up many presentations on the Doctrine of Discovery and the more than 500 years of history between Native American and white people in this country. Porter told Between Two Pulpits hosts Bryce Wiebe and Lauren Rogers Monday that only once has someone responded, “I didn’t do any of that, so why should I feel guilty?”

“He was being honest,” Porter said. “I said, ‘The land you are on and maybe some of your wealth came at the expense of Native American people.’ He told me he never thought of it that way.”

“Our history books are void of anything like this,” Porter said just days before the nation celebrates Thanksgiving on Thursday. “We don’t talk about the Doctrine of Discovery and about boarding schools that Native families were coerced into sending their children to. It’s an American skeleton in the closet that nobody wants to talk about, but the General Assembly said we need to talk about it.”

It’s a historical fact, Porter said, that Presbyterians ran some of the boarding schools.

“My father and his siblings went to one in Tucson,” said Porter, an enrolled member of the Pima Tribe who’s also descended from the Nez Perce and T’hono O’odham tribes. “The good thing was we didn’t hear the horror stories from [their experiences] … Presbyterians and others need to be up front about what happened. They were in collusion with the federal government to annihilate Native American culture and language, and it worked for a while.”

But not in the long run.

“We are still here,” Porter said.

Porter took time last week to help educate fellow employees of the Presbyterian Mission Agency during Diversity, Equity & Inclusion training. Another part of his denominational work is serving as liaison to the PC(USA)’s 97 Native American congregations. “I help them with leadership development and we do workshops,” he said. That work has been mainly online for the 21 months of the pandemic, work that’s challenged by a number of Native congregations who don’t have sufficient equipment or access to wi-fi to connect with online training opportunities.

“We were astounded to hear you do all that” working three-quarter time for the denomination, Wiebe told Porter, “and you do it alone.”

Although the 222nd General Assembly (2016) repudiated the Doctrine of Discovery, “it is still in play, and Indian law was established on it,” Porter told Wiebe and Rogers. As recently as 2005, the U.S. Supreme Court, in City of Sherrill v. Oneida Indian Nation of New York, ruled by an 8-1 margin, with Justice Ruth Bader Ginsburg writing for the majority, that tracts of land the tribe had repurchased to add to its reservation were not tax exempt and that the tribe could not revive its ancient sovereignty over the land at issue.

“The Doctrine of Discovery is not relegated to 100 years ago or more,” Porter said. “It is still happening.”

Porter, who works part-time as pastor of the Church of the Indian Fellowship in Tacoma, Washington, told Wiebe and Rogers that preachers this Sunday might do well to focus on Jeremiah 33:14-16 and Luke 21:25-36, two of the four lectionary passages for the first Sunday in Advent this Sunday.

“These are passages about looking forward in hope to the promises God has made to us,” Porter said. “God said, ‘Watch for this.’ What do those promises mean to us today?”

“That’s the key to my preaching,” Porter said. “I can stand up all day and preach about theological things, but if I don’t help them understand what 2,000-year-old Scripture means today, I will lose their attention very quickly.”

“What does Scripture mean to our crazy pandemic lives now?” Porter asked. “We try to do what we know is the right thing to do. The promise of God is that the future is not going to be like the present. Those things we see that are wrong and evil in the world will pass away, and peace, justice, joy and love will replace them.”

Porter said he enjoys delivering sermons that include concrete and memorable examples. He said he might lean on stories of Christmas mornings from his childhood, when his father was a Presbyterian pastor and, later, a federal employee who worked overseeing the kinds of boarding schools he’d once attended. The elder Porter raised eight children by himself — sort of.

“Our father worked many extra shifts to keep the wolves away from our door,” Porter said. “Our local church, where we were the only minority family, stepped up for us each Christmas.” Church members would cook Christmas dinner and deliver it to the Porters’ house. After the children had gone to bed, the few presents under the tree “turned into many gifts, just like in the Shirley Temple movie,” Porter said. “We thought it was Santa Claus, of course. We were never disappointed.”

In the same way, “God’s people are waiting, too, and they won’t be disappointed either,” Porter said. “Christ’s second coming will look like that. We wait in anticipation and we will not be disappointed, whether it happens in our lifetime or not. I tell people to keep their head high and be of good cheer, knowing that so many of God’s promises were fulfilled at Jesus’ birth.”

The image of “looking down the road is a good way to put that as people enter the Thanksgiving mode and enter the busy holiday mode,” Porter said.

Asked about his hope for the future of the Church, Porter said he longs for the day that people of color “won’t be relegated to the backseat” in PC(USA) congregations.

“At one time, decisions were made about our congregations without one Native American person sitting at the table,” he said. While decision-making is becoming more and more inclusive, “once in a while, it still happens. We’re getting there, but it’s going to take a while. I hope down the road the Church will say, ‘We need to get [Porter and his successors] involved before we go one step further.”

One thing more, Porter said: Native Americans sing their own hymns in their own languages during worship. “Those are gifts for the Church,” Porter said. “We ask that we be included at General Assembly” and other important meetings.