The church is responding to the Syria-Turkey earthquake, GIVE NOW!
Make A Donation Click Here >
Home › The PC(USA)’s Christian Women Fellowship Movement holds its annual Rally in Maryland 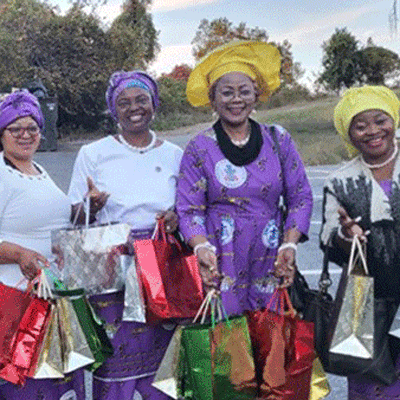 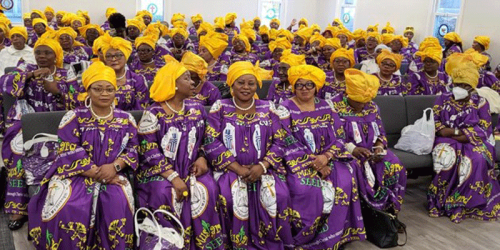 More than 300 members of the PC(USA)’s Christian Women Fellowship Movement gathered at Hope Presbyterian Church in Mitchellville, Maryland in October for the group’s Rally. (Contributed photo)

More than 300 women from all over the country were in attendance, as were about 75 men and 20 children, most of them from the host congregation. CWF’s Rally theme was taken from Ruth 1:16: “… your people shall be my people and your God my God.”

According to CWF PC(USA) National President Grace Atanga, “During this Rally, we honored our mission of reaching out to the less privileged in the community through our charity outreach program to the Prince George’s County men’s shelter for homeless men, where we distributed gifts to all the 40 men living in the shelter.”

“The women did not only offer up physical gifts,” Atanga said, “they also prayed and sang uplifting songs with the men who were very appreciative, and they in turn prayed for the women. … It is worth noting that the CWF group of Hope Presbyterian Church will ensure that this evangelistic activity continues not only with the men’s shelter, but also with the Shepherd’s Table, which is the shelter for homeless women.” 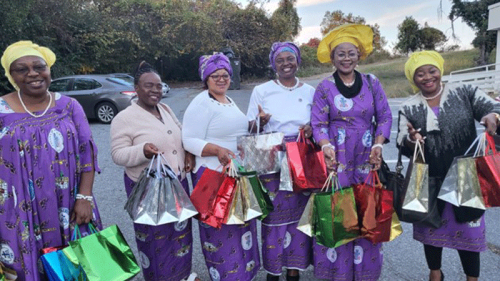 Each of the 40 men housed at a Prince George’s County shelter received a gift from the PC(USA)’s Christian Women Fellowship Movement. (Contributed photo)

Atanga led a retreat during the rally, using CWF Movement greetings from Philippians 4:13 and its motto from Nehemiah 8:10. “During the retreat, there were a lot of testimonies that helped strengthen members,” Atanga said. “There were a lot of uplifting songs and there was joy overflowing from the women.”

Following the retreat, attendees took buses around the Washington, D.C., area “to evangelize and promote the word of God,” Atanga said. “We believe that there are several people out there who might be hurting in one way or the other who may have needed to hear us sing or pray for them.” Atanga said the singing “drew multitudes towards us. We believe many were inspired and positively touched by the activities.”

During the final day, the CWF Movement crowned the Rally activities by enjoying a skit from the host group followed by Rally songs composed on the Rally theme. “It was a joyful occasion,” Atanga said, “as the members were very happy to see each other after two long years of not seeing each other” because of the pandemic.

According to Atanga, the mission of the CWF Movement “is to spread the gospel of Christ through spiritual, social and psychological transformation in the home, congregation and society at large. The CWF engages in ecumenical, evangelical educational activities, using a variety of skills on how to adapt and thrive in a fast-changing world.”

The group’s mission dovetails with the PC(USA)’s Matthew 25 invitation to, among other initiatives, feed the hungry, visit the sick, take care of people experiencing homelessness and advocate for peace and justice. “Like the Presbyterian Mission Agency, the CWF is committed to bringing God’s love to all humankind,” Atanga said, and it “believes firmly in women’s empowerment.” And like the PMA’s Racial Equity & Women’s Intercultural Ministries, the CWF Movement “equips women for leadership in all ministries of the church.”

“The members of the CWF Movement are committed to serving the Lord Jesus Christ wholeheartedly in the home, church and community,” Atanga said. “Faith without works is dead. May the joy of the Lord continue to be our strength as we serve in [God’s] vineyard. Shalom!”