The church is responding to the Syria-Turkey earthquake, GIVE NOW!
Make A Donation Click Here >
Home › The PC(USA)’s ‘Advocacy Watch’ offers takeaways from COP27 climate conference 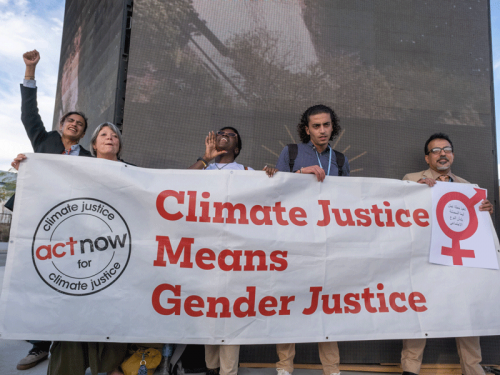 The Rev. Dr. Laurie Kraus, second from left, the director of Humanitarian and Global Ecumenical Engagement for the Presbyterian Mission Agency, took part in an ACT Alliance action for gender justice during COP27. (Photo by Simon Chambers/ACT)

LOUISVILLE — A Presbyterian Church (U.S.A.) delegation has returned from the United Nations Climate Change Conference in Egypt and is encouraging others in the denomination to find ways to show their concern for the environment.

“Get in touch with us, and we’ll connect you to groups and organizations” to collaborate with in your communities and churches, said Sue Rheem, a delegation member who co-hosts “Advocacy Watch,” the monthly advocacy episode of “A Matter of Faith: A Presby Podcast.” “There are things that each one of us can do to make a change.”

Rheem, who coordinates the Presbyterian Ministry at the United Nations, made the comment during the Dec. 5 podcast, which centers on COP27, a global event also known as the 27th Conference of the Parties to the United Nations Framework Convention on Climate Change. 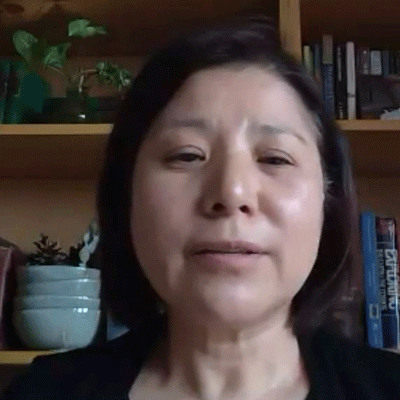 During COP, which takes place each year, world leaders come together to discuss ways to address the global climate crisis. In addition to representatives from nearly 200 countries, the event attracts nonprofits, indigenous groups and faith-based organizations and others to observe and take part in side events and other activities, such as protests and vigils. This year, there was an eight-member delegation from the Presbyterian Church (U.S.A.). Some of them appeared on the podcast.

“There is a rich history there of the Presbyterian church being present and having good connections,” said COP attendee Jessica Maudlin, the Presbyterian Hunger Program’s Associate for Sustainable Living and Earth Care Concerns. “We show up both as the PC(USA) but also as part of the World Council of Churches delegation and also the ACT Alliance — the activities that they plan — so we are well-connected to other faith organizations. That really helps us amplify the voices of people of faith.”

One of the biggest pieces of news from the November COP was a decision to establish a fund to provide payouts to developing countries that suffer what’s referred to as “loss and damage” from climate-related disasters, such as floods and droughts. 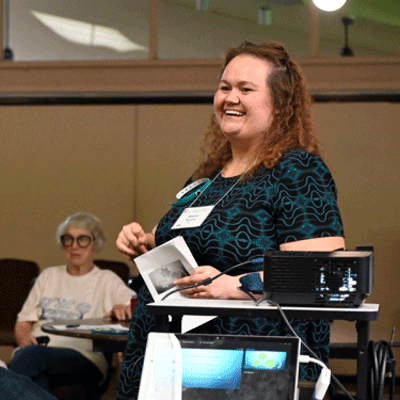 “It’s the first time in 30 years that loss and damage even made it onto the agenda to be talked about, let alone have an agreement around that,” Maudlin said during the podcast. Also, “they’ve established this transitional committee that will help supposedly make the decisions” about how the fund will be implemented.

Although COP attracts worldwide publicity to the subject of climate change, it does have its flaws, and some activists have begun to look at it in a critical away. Some are wondering, “do we need to bring 40,000 people to this conference to get things done?” said Advocacy Watch guest Catherine Gordon, Associate for International Issues in the Presbyterian Office of Public Witness. “I think that there’s going to be a lot of evaluation about the effectiveness of COP and what it means to participate in it.”

The podcast guests lamented the large presence of fossil fuel companies and efforts by corporate giants to promote themselves. Gordon, a first-time COP attendee, also spoke about a hunger strike by a man concerned about human rights conditions in Egypt.

“It gave a dark energy to the conference … knowing that someone might die in prison for human rights while we were at a conference on the environment, and very little attention was being paid to it,” she said.

Members of the PC(USA) delegation also noted some logistical difficulties at COP and a feeling that discussions weren’t always as productive as they needed to be, but there also were some bright spots (See Christian Brooks of the Office of Public Witness discuss her experience here.).

Maudlin recalled visiting a climate justice action hub that she found to be very hospitable. “Also, there were some side events inside of the venue that were geared more towards solutions and actions, and I got to be part of a really beautiful side event on storytelling and how everyone has a climate story to tell,” she said.

Maudlin’s day-to-day job includes interacting with PHP’s Earth Care Congregations. She plans to encourage them to begin working early to let their concerns about climate change be known so that “representatives at COP 28 can, hopefully, make some more ambitious decisions.” 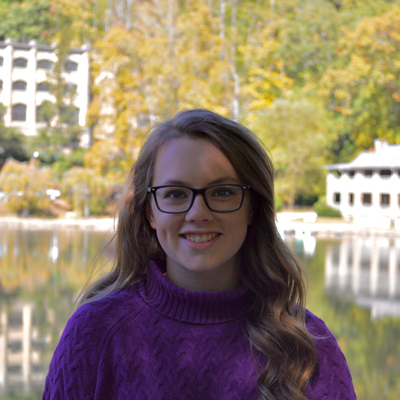 Victoria Alexander, a Young Adult Volunteer who worked with a fellow YAV, Lucy McDermott, to publicize COP happenings on social media, said she would like to see the church providing more opportunities for people to hear from the folks who are most affected by climate change. That includes small island nations at risk of disappearing in the near future and women, she said.

Rheem said it’s good to hear from young people and encourages more to become active. Young people “are our present, not just our future,” she said. 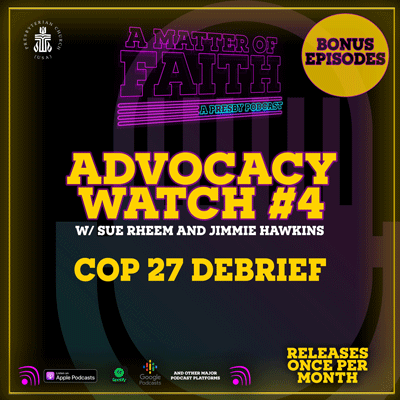 Advocacy Watch co-host the Rev. Jimmie Hawkins of the Presbyterian Office of Public Witness thanked the guests for sharing their experiences and challenges.

To listen to the full episode of “Advocacy Watch,” go here. You also can hear Maudlin discuss COP27 in an episode of “Let’s Talk Climate.”