Congregation embarks on a ‘Season of Repentance’ 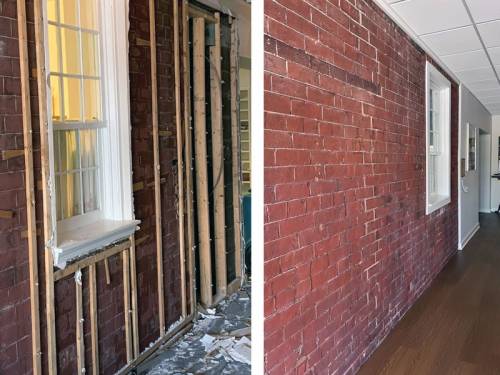 The past is often something people like to forget, preferring to focus their energy on what the future holds. For the Indigenous living in Peru’s Andean Highlands, though, the past and future are viewed differently. It’s there that old shamans, speaking the language of the Aymara tribe, remind future-forward thinkers that “the past is in front of us, and the future is behind us.” The Aymara word for “past” is “nayra,” which also means eye, sight or front. The word for “future” is “q’ipa,” which translates as behind or the back.

When Patti Warner of Trinity Presbyterian Church shared this thought-provoking saying with the session, little did they know how soon the past would be standing directly in front of them. But in the spring of 2020, the past poured on the Harrisonburg, Virginia, church — literally and figuratively — in the way of a rainstorm.

The Rev. Stephanie Sorge said the deluge sent a flood of water rushing into the antebellum house built around 1825, which is the focal point of the church’s campus. Linda Bradley, a member of session, recalls assessing the damage with Sorge and fellow church member Mark Facknitz. As the three watched a cleanup crew pull down waterlogged Sheetrock, they couldn’t believe what was being revealed: a brick wall.

They looked from the wall to one another. They didn’t have to utter a word. Brick by brick, the past was in front of them, whispering the long-forgotten stories of the enslaved people who built what now housed a church embracing the Matthew 25 vision of eradicating systemic poverty, building congregational vitality and dismantling structural racism.

“We knew that wall had to remain exposed,” said Bradley.

A flyer was soon written about the significance of the wall. After acknowledging the bricklayer’s skillful work, it continues: “Yet this is also a wall of pain. This was a wealthy man’s wall when all wealth derived directly or indirectly from slavery … mindful that as Christians we are called to be agents of truth, justice and atonement. We knew that we would not hide it.”

The wall, says Bradley, became a symbol for the work Trinity Presbyterian was about to embark on. “Our ministry had not been put into context, but now we were staring at a comprehensive picture,” she said.

Soon after the rainstorm exposed the brick wall, in June 2020 the PC(USA) Special Committee on Racism Truth and Reconciliation called for “a season of repentance for the church’s complicity in the horrific history and unjust treatment of people of color, which continues to this day.”

The following year, Trinity member Virginia Bethune, inspired by the statement from the PC(USA), the symbolism of the exposed brick wall and the church’s commitment to living out Matthew 25, requested that session create its own “Season of Repentance.”

A Season of Repentance task force was created. Among the members were Bradley, Facknitz and Warner as well as Trinity congregants Pat Churchman and Jim Newman. The group set out to find ways to honor the contributions of enslaved people in the area and to develop a plan of action inviting the congregation to live out their Matthew 25 commitment to end systemic racism.

Bradley said part of the season was spent reviewing church historical documents and examining public records. The question “At what cost?” was asked of Trinity Presbyterian’s ministry throughout the research. They soon discovered that cost. Sometime before the Civil War, at least 15 enslaved people, most of them children, Warner says, lived in the antebellum house. The task force also learned that those children were among the 2,800 Black people then living in the county who were forced to labor for others’ gain and comfort. While such information had to be brought to light, the task force also realized that healing slavery’s wounds would have to begin with lament and repentance woven within a worship service.

This year, the task force “worked hard,” Bradley said, creating a service that was held on Palm/Passion Sunday. Facknitz delivered the sermon appropriately titled “Brick by Brick,” referring to the now-famous brick wall and its inspiration to build a more equitable future. The service also featured a Prayer of Confession, which was the first section of Trinity’s Season of Repentance statement that was adopted by session in December 2021. The second section of the statement served as the worship service’s Declaration of Forgiveness.

The findings compiled by the task force, however, “will not sit on a shelf,” said Bradley. Session recently approved a Matthew 25 standing team to continue the work of the task force.

“This team will keep our Matthew 25 initiative before the congregation in such ways as ‘Moments for Matthew 25’ during worship,” said Bradley. And, of course, there’s that wall, standing as a testament to all who touch its storied bricks.

Yes, the past is in front of us, and the future is behind. Just ask anyone at Trinity Presbyterian to explain how true that Peruvian saying is.

When planning the Palm/Passion Sunday worship service, the Season of Repentance task force took its statement, which was approved by session this past December, and used it for the Prayer of Confession (Section 1) and Declaration of Forgiveness (Section 2).

Trinity Presbyterian Church acknowledges its debt to the first residents of our valley. Well into the 17th century there were substantial and stable settlements of Indigenous people in the Shenandoah, some within a few miles of where we now congregate. We acknowledge, with gratitude, these stewards of the land through the ages. We recognize the lasting need to redeem the injustice done to them, here and everywhere. We acknowledge that at its core our church building was once a place where Black people, many children among them, were presumed to be in body, mind and soul the property of the building’s prosperous owner. We acknowledge that we are still beset with the hurts of racism, personal and social, for which we strive to atone.

We acknowledge that the repair of past sins requires repentance and the courage to bear witness to truth and to carry our convictions into all of our encounters with new friends and old, strangers and newcomers. We seek the grace of God through the cleansing energy of the Holy Spirit to grant us the courage to achieve “unity of spirit, sympathy, love for one another, a tender heart and a humble mind.” Amen.