Inspiring faith in our youth. Support the Pentecost Offering.
Make A Donation Click Here >
Home › The Mango Palace may be the key to lifting Malagasy farmers out of poverty

About 90% of farmers in Madagascar live in extreme poverty 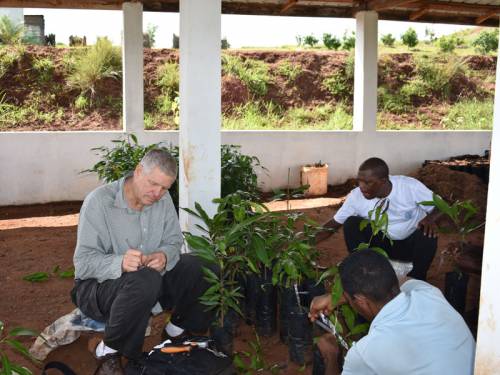 A grafting party prior to the dedication of the Mango Palace in Madagascar. (Photo by Germain Andrianaivoson)

Ezekiel 36:30: “I will make the fruit of the tree and the produce of the field abundant, so that you may never again suffer the disgrace of famine among the nations.”

LOUISVILLE — One of the long-term effects of COVID-19 in some of the world’s most vulnerable countries will be widespread famine. In Madagascar, where the average person lives on less than $250 a year, the FJKM (Church of Jesus Christ in Madagascar) fruit tree center at Mahatsinjo will help offset the impact of hunger in one of the poorest countries in the world.

Growing tropical fruits has tremendous potential for helping Malagasy farmers get out of poverty. About 90% of Madagascar’s farmers live in extreme poverty.

The fruit center, known now as “The Mango Palace,” is located just outside Mahatsinjo, a town of several thousand residents about four hours from Antananarivo, the capital city.

Why specialize in mangos? According to mission co-worker Dan Turk, who has lived in Madagascar for more than 20 years with fellow mission co-worker, wife Elizabeth, mango trees produce well in areas that have a long dry season and do not require highly fertile soils. Much of western Madagascar is suitable for growing mangos and much land is available for doing so, since very few other crops are grown on hillsides.

Dan Turk has taken courses and utilized the knowledge of a world-renowned center for mango research in Florida, a state known for having produced many of the world’s most widely grown mango varieties. Following all required import procedures, he began bringing many of these varieties to Madagascar beginning in 2000.

“We hope to spread excellent varieties of mangos and the techniques needed for growing and propagating them throughout the parts of Madagascar suitable for growing mangos,” he said. “This will happen through the structures of the FJKM church, so that individual congregations can help the people in their communities take advantage of the potential of mangos to improve food security and increase family income.” 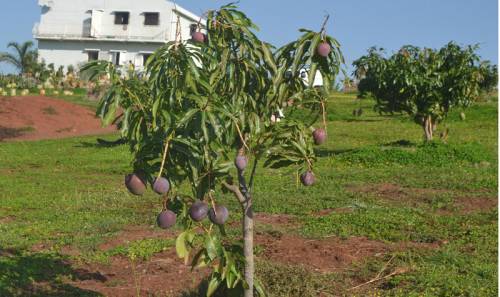 By helping people grow selected mango varieties with commercial potential, and by helping people learn to graft their own trees, Turk said they are enabling people to produce as many high-quality trees as they need. Training low-income farmers to do just that was a project funded by the Presbyterian Hunger Program that began in 2019.

The trainees, from the Maevatsara Synod, where the fruit center is located, received grafted mango trees to take home and plant on their land. The fruit center is also providing internship opportunities for university students.  Last September, the center hosted 37 agronomy students from the new FJKM University for 10 days. A new dormitory building was completed and celebrated at the March 20 dedication of the facility so that farmers and students will now have good overnight accommodations when they come for training.

Turk has long been committed to preserving Madagascar’s unique biodiversity. More than 80 percent of plants and animals occur naturally only there. He believes the new fruit center will play an integral role in that strategy. Soon he hopes to work with colleagues to create mango-growing projects around national parks and other protected areas.

It took about four years to open the facility, from finding the property to building the support systems needed for it to function. They first dug wells but hit rock and had to fill them in again and create a gravity-fed water system.

In 1998, Dan Turk learned about Beambiaty, over 40 miles from the closest paved road, in midwestern Madagascar, where tangerines are grown commercially. Growing tangerines had lifted the entire community out of poverty. The key innovation there was diverting a stream from the surrounding hills to bring water to their village for irrigation.

This inspired Turk and colleagues at FJKM to start a tangerine project at the village of Antanetibe, a town about two hours northwest of Antananarivo. Antanetibe has small irrigation canals that bring irrigation water for growing crops. The first tangerines were planted there in late 2010. By 2017, the people were getting good harvests, and many are well on their way to getting out of poverty. Dan and his colleagues recognized that mangos have even greater potential than tangerines to help people because they can be grown without irrigation. 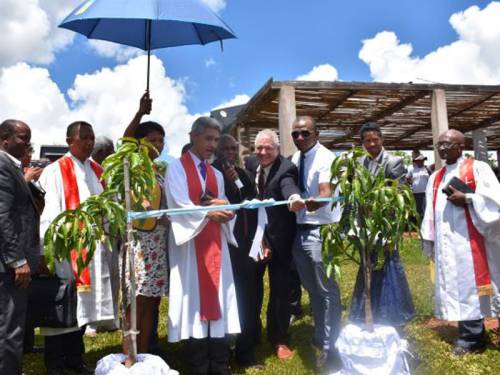 The dedication of the Mango Palace in March. Dan Turk is in the center. (Photo by Germain Andrianaivoson)

Both Dan and Elizabeth Turk planned to join the March dedication, but COVID-19 had other plans for them. Elizabeth was recovering from a brief illness, so they felt it best for her to return to the U.S. before the pandemic came to Madagascar. Dan would attend the ceremonies on March 20 and then join Elizabeth later for self-quarantine near family in Florida. It was on his way back to their home at the Ivato Seminary on the outskirts of Antananarivo that he got the call there was a confirmed case of coronavirus. It took him until March 31 to get a seat on a repatriation flight back to the U.S. After his own self-quarantine, the two are temporarily residing in Florida, but working non-stop to serve partners in Madagascar.

Madagascar is an island nation off the coast of southeast Africa. After Greenland, New Guinea and Borneo, it’s the fourth-largest island in the world. Dan Turk believes that Christians have a responsibility for preserving creation, as written in Genesis 2:15: “The Lord God took the man and put him in the Garden of Eden to work it and take care of it.”

Born in Atlanta, Dan graduated from Davidson College in North Carolina with a Bachelor of Science degree in biology. He earned a Master of Science in agronomy and soil science from the University of Hawaii at Manoa and a doctorate in forestry from North Carolina State University. His doctoral research focused on the growth rates of more than 60 native Malagasy trees.

Born in Alabama, Elizabeth works with the FJKM is in the areas of community health and HIV/AIDS, in training, program design and implementation. The FJKM’s health professionals at rural dispensaries work to prevent and treat the major illnesses that threaten health: malaria, measles, diarrhea and pneumonia. The dispensaries also provide access to important services like family planning. When funds permit, Elizabeth assists the FJKM’s efforts to help communities gain access to safe drinking water. She serves on the FJKM National AIDS Committee. She has a bachelor’s degree in psychology from Duke University and later earned a bachelor of science in nursing from Indiana Wesleyan University and a master’s degree in public health from the University of North Carolina at Chapel Hill.