Preacher: The good news is the best tool for dismantling white supremacy 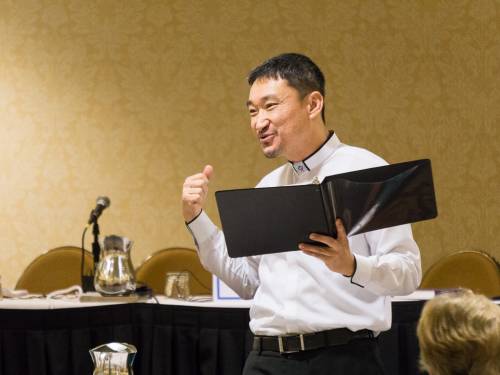 The Rev. Samuel Son is shown preaching to the Presbyterian Mission Agency Board last year. (Photo by Gregg Brekke)

LOUISVILLE — The gospel empowers people of color — and it’s for white people too, the Rev. Samuel Son, the Presbyterian Mission Agency’s Manager for Diversity and Reconciliation, told a crowd gathered for worship at the Presbyterian Center last week and for a quarterly update on the Matthew 25 invitation from PMA leadership.

“The gospel empowers the people of color to love themselves as Christ loved them,” Son said. “That we do not need to be white. That we are God’s people, beautiful and powerful.”

“The gospel is for white people too! That you are loved as you are, that you don’t need white supremacy to prop you up,” he said. “Dismantling white supremacy shouldn’t make you defensive. It is about your liberation to the gospel of Christ!”

Rather than accepting things as they are, “love is resistance,” he said. Love “confronts racist behavior from fellowship hall to city hall, from classrooms to courtrooms, from the preachers to the presidents.”

If the current generation is to be known for the bringing about a second Reformation, “rediscovering the power of the gospel to change the world,” he said, “it will have to be the story of how it reformed the church from being a religious arm of white supremacy to the gospel proclaiming people of God who confessed with their lips and life that Christ alone is Lord.”

Son based his sermon on portions of the first two chapters of Paul’s letter to the Galatians.  In Gal. 1:6-9, Paul expresses astonishment that the church in Galatia is “so quickly deserting the one who called you in the grace of Christ and are turning to a different gospel — not that there is another gospel, but there are some who are confusing you and want to pervert the gospel of Christ.”

Then in Gal. 2:11-14, Paul rebukes Peter: “But when I saw that they were not acting consistently with the truth of the gospel, I said to Cephas (Peter) before them all, ‘If you, though a Jew, live like a Gentile and not like a Jew, how can you compel the Gentiles to live like Jews?’”

According to Son, Peter had separated himself because of “that policy of not eating food sacrificed to idols.”

“Peter sold out the gospel to live by a policy that was racist,” he said. Son used the power dynamics between the Jewish majority and gentile minority to explain how racial supremacy works. “The Gentiles, seeing how they were treated by Peter and even Barnabas, connected the dots. The only way to be accepted doesn’t really depend on faith — trusting Christ as Lord and Savior — but assimilation: to eat like them, to be circumcised like them, to be white like them.”

Song says Paul’s point is that if human value is determined by, say, the color of our skin or by what we eat, “then Christ died for nothing.”

“White supremacy is a perversion of the gospel,” he said, “which is also to say that the gospel has the power to dismantle white supremacy and its social and political phenomena called racism.”

“I am not ashamed of the gospel,” Paul wrote to the church in Rome. “It is the power of God for salvation to everyone who has faith, to the Jew first and also to the Greek.”

“Gospel has agency. This isn’t rhetoric. This is reporting,” Son said. “For every time the gospel was preached, it always created a community where both Gentiles and Jews, masters and slaves — people raised to hate each other experience the love of God, accept the other and break bread as family.”

Christ accepts us for who we are

“I did not know I had slanty eyes until I was seven, when I came to America and I was made fun of for my slanty eyes,” Son said. “And I would spend time before the mirror trying to round my eyes.”

When his mother would take him shopping at a department store and would speak in Korean, Son said he would hide among the mannequins.

Paul is angry with the Galatians “only as a father is angry when he sees his child hurt itself,” Son said. “It is love expressing itself in anger. Why do you want to change the way you look? You are beautiful just as you are! Christ accepted you just as you are! Who told you, you are ugly? Who told you, you had to go under the knife and circumcise yourself, thin your nose, whiten your skin?”

“The work of dismantling white supremacy is the central work of God’s people,” he said, “because what is at stake is the gospel. We confront racism because racism perverts the gospel.”

Samuel said he’s planning “a more expansive study” on the topic for a 2021 Lenten series, to be published by The Thoughtful Christian.