Make A Donation Click Here >
Home › The eye of the beholder

The Rev. Lauren Wright Pittman tells Between Two Pulpits hosts she’s grateful for perceptive takes on her works of art 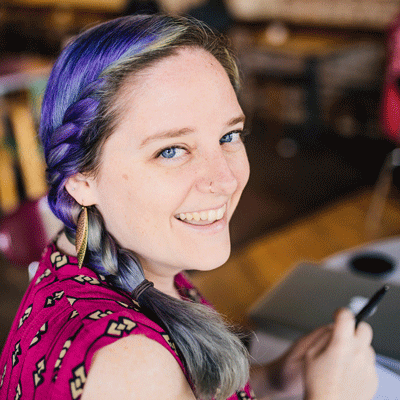 LOUISVILLE — While it’s always fun and enlightening to have an artist explain her work, the Rev. Lauren Wright Pittman clearly enjoys hearing what others read into her work.

Pittman, an ordained Presbyterian Church (U.S.A.) pastor and the founding creative partner and director of branding at A Sanctified Art, created pieces for the Peace & Global Witness and Christmas Joy special offerings. 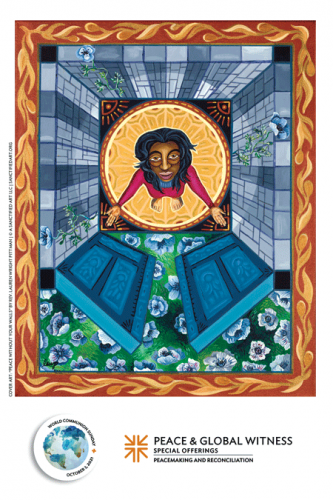 “Peace Without Your Walls” by the Rev. Lauren Wright Pittman was used as part of the Peace & Global Witness special offering.

Pittman based the first work, “Peace Without Your Walls,” on Psalm 122, which reads in part, “Pray for the peace of Jerusalem: “May they prosper who love you … Peace be within your walls, and security within your towers.”

She recalled waiting one day for convocation to begin during her time as a student at Columbia Theological Seminary. A flash mob of sorts “popped up out of nowhere,” she said, calling out the opening words to Psalm 122: “I was glad when they said to me, ‘Let us go to the house of the Lord!’”

“It was unexpected,” she said, a bit like the thought process that often goes into her work.

Walls keep things out and hold other things in, she noted. Towers are tall and narrow. They’re “not for habitation. They’re for observation or they’re defensive positions.” She wondered: Do those go together?

She envisioned a woman extending her arms, praying for peace. Then she asked her mother to stand on a chair and hold her arms out. “This woman emerged for me,” she said of the subject of her work, “and became the focal point.”

She chose white poppies as a symbol of peace, “to challenge the glamorization of conflict.” The flowers “grow in cracks in the walls as a vine would weaken a structure,” she said, “a nod to the work of God, dismantling walls and towers,” or ensuring “we have no need of them anymore.”

The title “Peace Without Your Walls” is “a direct reference to the text. There was a bit of cheekiness to that and the climate we are in” where “people are striving for a world of security and peace that looks different than what I think God wants for us. It’s a little confrontational.”

Who knows, Wiebe responded, “that the psalmist wasn’t being a little cheeky in their recitation?” He wondered “where there are walls that are permeable and good?” When Wiebe first saw Pittman’s work, he thought of a cellular structure “with ways in and real connecting points.”

“This is why we need one another,” Pittman replied. “I am happy when I hear people respond to these images. It’s cool to have the piece as something that lives beyond me.” 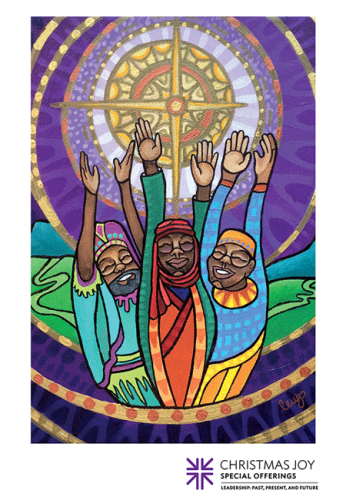 “Shining Hope” by the Rev. Lauren Wright Pittman is part of this year’s Christmas Joy Offering.

Her second creation, “Shining Hope,” is based on Matthew 2:7-12, the account of the star stopping over the place where young Jesus and his mother, Mary, were staying. They pay the child homage, give him gifts and then return to their country via a different route after being warned about Herod in a dream.

“The piece of the text that sticks out is the moment the star stops” after the wise men had been “chasing after this light source, a sense of hope that felt out of reach, a moving target,” Pittman told Wiebe and Rogers. “Joy is an emotion I often find elusive, but maybe this joy is reachable.”

In “Shining Hope,” the bodies of the wise men — there are three of them traditionally, a nod to the three gifts the wise men presented to Jesus — are waving, as if “they are blooming out of the ground,” Pittman said. “I thought of them as flowers growing out of the ground, the joy of the earth. I tried to capture the moment of them reaching for the star that has now stopped.”

“It mimics the Transfiguration image,” Wiebe told her. “It’s the going back and not staying, but going back another way. I love the sense of rootedness in a story that’s about travel.”

“It’s my favorite of yours that we’ve used,” Rogers told Pittman. “You can see it radiates joy.”

When asked by Rogers about her hope for the future of the church, Pittman said what comes to mind is “Bryce’s image of walks being permeable, making structures more life-giving and community-building … I hope the church can see itself in an entirely new way and be permeable.”

“May the church be open to what it sees and what it hears,” Wiebe prayed to close their half-hour together. “May its only defense be your shalom, and may the only thing it looks for is your peace on the horizon, because we know it comes.”