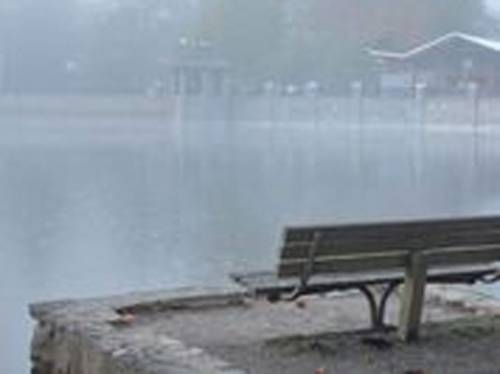 MONTREAT, N.C. — Preaching at the Presbyterians Association of Musicians conference being held this week at the Montreat Conference Center, the Rev. Dr. Rodger Nishioka, senior associate pastor at Village Presbyterian Church in Prairie Village, Kansas, talked about a life-changing series of events.

In February 1942, FDR ordered the removal of all persons of Japanese ancestry from the West Coast.  More than 120,00 people were affected. Two-thirds of them were American citizens.

One of them was a 9-year-old girl named Alice.

Born and raised in California, Alice grew up on a farm with her parents and her younger brother Harry. In February 1942, Alice’s father was going to be named the chairperson of the Japanese farmers association because he’d shown up on a list as a community leader.

One night the FBI came to the house and took Alice’s father away for questioning. The family had no idea where he was going, or for how long. In April an order arrived instructing the family to leave the farm. They had 12 days to pack everything and were told, “Take only what you can carry.”

As they got on a bus with blacked-out windows, rumors swirled they were going to be sent back to Japan. That was a land that Harry, Alice and her parents had never seen.

When they got to where they were going, other Japanese Americans were there.

Harry told his mom that he was hungry. Alice remembers being mad at Harry for asking for something to eat, because that’s the only time she’d seen her mother cry during the ordeal.

“Children, I’m so sorry you have such a bad mother who forgot to pack you food,” she cried.

Alice went to see if she could find someone to give them some food.  The crowd sort of parted for her — and standing there was a tall white woman with a tray of sandwiches, fruit and juice.

Alice said, “Excuse me, is this for sale?”

“I am a Christian friend,” the woman replied.

Alice took some juice, a couple pieces of fruit and some sandwiches to her mother. Harry began to eat right way.  But Alice’s mother said, “Where did you get this?”

“From this white woman,” Alice said, “who says she’s our Christian friend.”

“That’s not possible,” said Alice’s mother.  “We’re Buddhists. We don’t know any Christians.  They’re not our friends, and white people hate us. That’s why we have to do what we’re doing now.”

Alice went back to the woman and said, “We don’t have any white Christian friends.”

The woman smiled. “Well, you do now,” she said. “We’re Quakers and we think what’s happening to you is wrong.”

Eventually, the family spent almost four months in a horse stall at a racetrack.  Their next stop was at an internment camp in Arizona, where they stayed for three years and where Alice and Harry’s father rejoined them after he’d been incarcerated in North Dakota.

After the war, Alice’s family moved to Pocatello, Idaho, because they’d heard that white farmers would hire Japanese.  Now 12, Alice became friends with Sally at school, a white girl who was Nazarene.

Sally invited Alice to come sleep at her house one Saturday night and attend church with her on Sunday.  Alice asked her mom if it was OK.  “No,” her mother said. “You have a bed here. Why would go you sleep somewhere else?”

Alice said, “Mama, she is my Christian friend.”

“Then you may go,” her mother said.

Alice loved that first day going to church. She began to go every Sunday with Sally and her family. Eventually, Nishioka said, she was baptized and received Christ as Lord and Savior.

When the family moved to Hayward, Calif., Alice found the San Lorenzo Japanese Christian Church. She took Harry with her and eventually their little sister, Helen. Then her parents started going. Eventually all of them became members.

When Alice started attending community college, she worked at the church as a secretary.  An intern, Richard, from Berkeley Baptist Divinity School came to work at the church. Alice remembers this tall man was good looking, but also recalls him being a little too impressed with himself.

Richard thought Alice was beautiful and smart, and asked her out on date. She declined, but to his credit, Nishioka said, Richard was persistent.  Eventually they fell in love, married and had four sons together.  One is an optometrist in Los Angeles. One just retired as an air traffic controller in Honolulu. One works with immigrant families for a non-profit agency in Seattle. 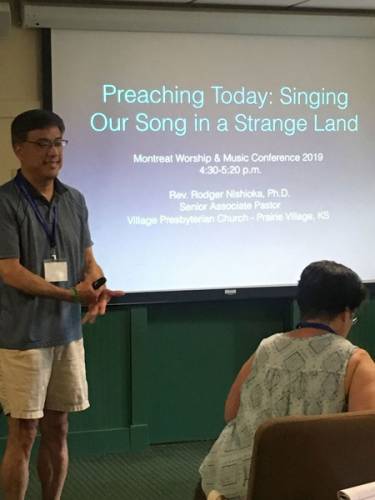 The Rev. Dr. Rodger Nishioka was the preacher during the Presbtyerian Association of Musicians conference in Montreat, N.C. (Photo by Paul Seebeck)

“And one,” Nishioka said, “has the great honor of preaching from the platform of the Montreat Conference Center, at this music and worship conference.”

“I am standing here, because of one Quaker woman and a tray of sandwiches, fruit and juice.”

When Nishioka goes to heaven he can’t wait to meet the woman, say a word of thanks and ask her this question: “How did you have the audacity and courage to act, when the rest of the country was convinced that my mother, at 9 years old, was not to be trusted?”

Nishioka told his family story while preaching from Matthew 15:21-28, where the community of people for whom Jesus had been sent was expanded by a Canaanite woman. She’d come to him asking for healing of her daughter, but initially Jesus referred to her and her people as dogs.

“It was a despicable, racist thing for our Lord to say,” Nishioka said.  But because of the woman’s persistent courage to seek justice, Jesus moved beyond the status quo. At first, he’d told the woman that he came only for the Jews.

“Peace,” Nishioka said, “is not the absence of status quo, but it is the courage to seek justice.”

“How dare you sit there and think you don’t have the ability to effect justice and bring peace into the world?” Nishioka said. “It took just one woman — with a tray of sandwiches, pieces of fruit and juice — to transform a whole series of lives.”

The two-week PAM conference, which was attended by a total of 1,430 people, concludes Friday evening with a concert.  The conference theme, “Not as the World Gives,” is based on a verse from Jesus’ Farewell Discourse, John 14:27 , where Jesus says to his disciples, “Peace I leave with you; my peace I give to you. I do not give to you as the world gives. Do not let your hearts be troubled, and do not let them be afraid.”