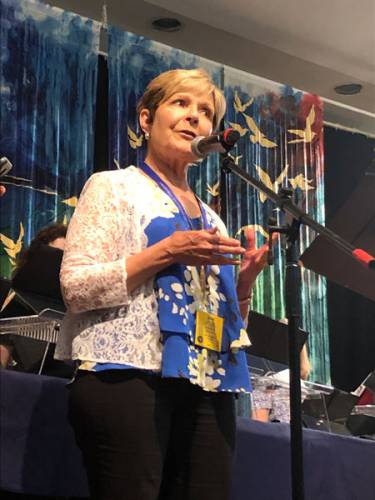 Dr. Janet Loman introduces the 50th anniversary campaign for the Presbyterian Association of Musicians Friday during a concert bringing the 2019 Worship and Music Conference to a close. (Photo by David Gambrell)

The goal of the “Thankful Hearts and Voices Raise” campaign is to raise $1 million in time for next year’s 50th annual PAM worship and music conference.

The campaign was unveiled Friday during the concert capping the 2019 conference.

PAM officials told conference participants that at least half of the campaign’s proceeds will be invested to help ensure PAM’s future and sustain its ongoing work.  The remainder will be used to support new initiatives and expanded programming.

It’s one of the reasons why Loman is thrilled to be leading the campaign, having taught at New Mexico State University for 29 years. She said her first encounter with PAM was in 1996, the year she attended the association’s western states conference in Albuquerque.

She said she was immediately hooked.

“I was in heaven,” Loman said.  “We’re isolated in New Mexico, geographically with distance and virtually no resources.  There I was with people who care about worship, music and creative things.” 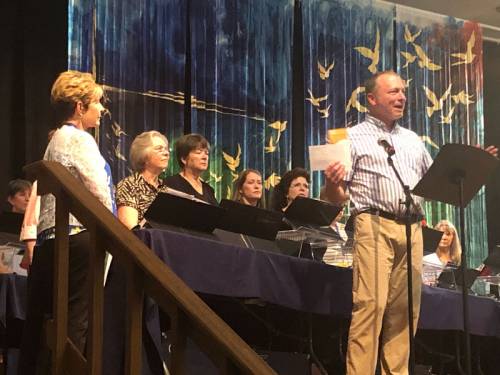 Clark Simmons speaks as PAM’s 50th anniversary campaign is unveiled during the 2019 Worship and Music Conference, which concluded Friday. (Photo by David Gambrell)

From 2003-2009, Loman served on the PAM board.  As board president from 2006-2008, she helped put together the Mo Ranch/PAM worship conference for liturgists and musicians in the West.

“We had a wedding at their conference center,” Loman says, “where we — PAM and Mo Ranch — got married.”

With the Mo Ranch/PAM conference coming to an end this year due to low registration, Loman recognizes even more the importance of PAM working on new initiatives and expanded programming for smaller churches that don’t have the economic resources to spend on coming to national or even regional conferences.

According to Loman, PAM is working on a grassroots model in which small teams — with say a pastor, a musician, an organist and a choir director — travel to smaller communities and say, “We’re here to work with your churches and anyone in the community who values meaningful worship, music of the highest quality, and transformative arts that nurture and shape faith.” 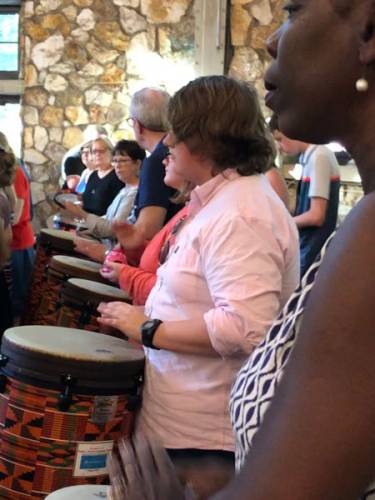 A line of drummers provided gathering music during the final concert at PAM’s 2019 Worship and Music Conference. (Photo by David Gambrell)

Loman wants to do this because she believes her children and grandchildren will benefit, as will generations to come.

“I see the need for the kind of faith formation PAM does,” she says. “Teaching college students, it floored me how many didn’t know hymns.”

“It’s heartbreaking when the glory of God is not represented.”

The campaign seeks to address this concern, introducing new generations to the ancient and ever-expanding treasury of the church’s song.

PAM’s executive director, Kelly Abraham, explains, “As PAM approaches its 50th anniversary in 2020, we are excited to continue the important ministry entrusted to us by God, and to explore ways that we can more effectively serve a changing church in an increasingly secular world.”

The “Thankful Hearts and Voices Raise” campaign has begun. Every church has been sent  promotional material and a video, which can be seen here.