Five-member team will journey to Central America, report next year to General Assembly 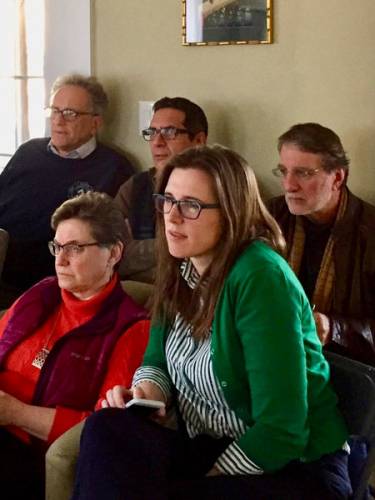 LOUISVILLE — From February 8-10, and again by conference call on March 12, the Presbyterian Central America study team outlined the chief concerns and questions facing the region and its churches.

Last year the General Assembly called for the Advisory Committee on Social Witness Policy “to develop a comprehensive study of the current socioeconomic and political realities in Central America and report its findings and recommendations to the 224th General Assembly (2020).” ACSWP, in turn, matched study needs with volunteer experts with long experience in the region.

The five people appointed to the study team are:

In addition to the qualifications related to their academic fields, all three faculty members are ordained ministers who preach regularly. All study team members have experience in the region and fluency in Spanish. Brashear chaired two of the study teams of the Advisory Council on Church & Society (one of ACSWP’s predecessors) in the 1980s, during the last period of sustained General Assembly attention to the region. The study team is staffed by the Rev. Christian Iosso, a social ethicist and former pastor who serves as coordinator for ACSWP.

As stipulated by the General Assembly, ACSWP is working closely with the Latin America office of World Mission. Rev. Valdir França is the coordinator of that office, drawing upon regional liaisons Leslie Vogel, Tracey King-Ortega and Dennis Smith. (These mission personnel met with the study team by video conference call.) In turn, other mission co-workers will be involved in what is seen as a dialogical study process with partner churches in each of their countries. As the study team develops research questions, it will share them with Presbyterian Church (U.S.A.) church partners and invite their questions and concerns in return. In this way, the final report should contain the voices of citizens from across the region.

The PC(USA) has partner churches in the five countries with the bulk of Central America’s 44 million people: Guatemala, Honduras, El Salvador, Nicaragua and Costa Rica. The study team expects to visit the three “Northern Triangle” countries early this summer and Nicaragua and Costa Rica in early fall. They have also begun to receive input from the mission networks of Presbyterians related to those countries. Though conditions in Panama and Belize will be assessed, as will trends in Mexico, Colombia, and Venezuela, available funding limits the attention that can be given to the neighboring countries.

The PC(USA) and ecumenical partners played a key role in the 1980s in opposing U.S.-sponsored war following the Sandinista Revolution in Nicaragua and para-military death squads in El Salvador and Guatemala. The denomination also supported the peace accords that helped strengthen democratic politics and the emergence of civil society activism during the 1990s. Extensive studies and theological work backed major public policy initiatives focused on improving U.S.-Central America relations.

The Presbyterian and Lutheran churches fought legal battles in the 1980s to protect sanctuary congregations from government infiltration and surveillance. Today many congregations and denominations have supported a return to sanctuary and other strategies to protect asylum seekers and others trapped in a broken immigration system. The PC(USA) has strengthened its peaceful presence on the border through ministries and acts of witness that embody a message of hospitality: “We choose welcome.”

The study team’s analysis of the tragedy continuing to unfold at the U.S.-Mexico border draws on several key factors:

The study team did some initial reflection on the fault lines between indigenous and mestizo peoples who cross borders. These fault lines  are traditionally over land rights, cash cropping and mineral extraction. Among other major concerns are the treatment of women in changing contexts, including free trade zones and the impact of migration on families and the regional economy. Newer religious dynamics — neo-Pentecostalism, solidarity with North American “historic” Protestants and intra-Catholic tensions — prompt questions about the continuing influence of liberation theologies, both Protestant and Catholic, and make possible new lines of theological inquiry.

The consequential flight of Central American refugees and the spike of political asylum-seekers in the United States profoundly affect debate on U.S. immigration policy. The study team will be in contact with the Office of the General Assembly as well as the Office of Public Witness in Washington, D.C., to help Presbyterians and others understand why record numbers of Central Americans continue to flee their homes and what can be done to protect their lives, societies and churches.