Goal is to focus on just relationships 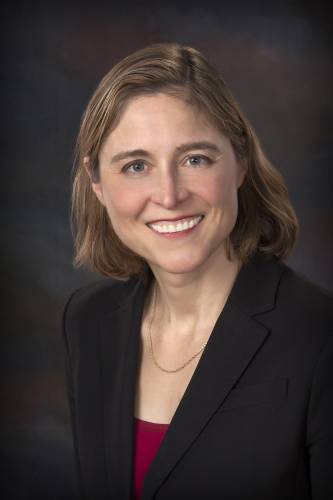 LOUISVILLE — Researching her book on college hookup culture required Dr. Jennifer Beste to do what all good professors do — listen to their students.

Beste, who wrote the 2018 book “College Hookup Culture and Christian Ethics: The Lives and Longings of Emerging Adults,” was the Caldwell lecturer Friday as part of Louisville Seminary’s 2018 Festival of Theology and Alum Reunion. More than 100 people heard her 90-minute presentation, which drew upon research completed by her students at the College of Saint Benedict in St. Joseph, Minnesota.

Beste said she was “amazed at how honest and insightful” her students are. “They said, ‘Adults don’t live in our reality,’” she said. Beste’s response: “Why don’t you go out and be researchers?” by analyzing college parties. In all, 126 students have done just that.

Student researchers attending public and private universities in seven states found excessive alcohol consumption occurred even before the party started, with many women feeling the need “to dress as sexy as possible to gain male approval,” Beste said. Every researcher reported “hooking up” — casual sexual activity between strangers fueled by “a lot of alcohol.”

Ninety percent of researchers said most, if not all, of the students they observed were dissatisfied and unhappy with this hookup culture but felt pressured to drink excessively. Both men and women spoke of how lonely they felt following hookups. Many who developed feelings for their partner following the hookup expressed hurt – usually women.

Typically, hookups focused on the man’s sexual pleasure. Many hookups included sexual assault. “The amount of suffering is alarming,” Beste said. “Even if we could end sexual assault, women would be experiencing PTSD, depression and a loss of self-esteem.”

The research showed one religious institution encouraging students to enroll in a class on pole dancing. “The fear is, if we don’t spice things up, our partner will leave us. One student said, ‘It gets to be exhausting,’” Beste said. “I was struck by the weariness in her tone. There’s something wrong when 20-year-olds are weary about sex. This is clearly not what God intends for us.”

Drawing on Johannes Metz’s “Poverty of Spirit,” Beste said her students — she is Professor of Theology and Koch Chair for Catholic Thought and Culture — resonate with Metz’s teaching on Jesus’ wilderness temptation to immediately satisfy his needs, including turning stones to bread. They quickly see the parallel to hookup culture, she said.

“Jesus’s self-worth is grounded in being loved by God,” she said. But many students are more grounded in rugged individualism. They feel pressure to be nothing less than the best, and they’re hyper competitive, working vigilantly at trying to improve themselves. Not wanting to feel “clingy, needy and pathetic,” they “find someone they can hook up with and forget about,” Beste said. “Hookups appear to be the reasonable choice, and they are time efficient.”

The proliferation of pornography “mirrors students’ analyses of hookup culture,” she said. “Pornography has become mainstream in adolescents’ minds, and we have an urgent need to address it … This is not Playboy. Most of it is incredibly violent and abusive of women.”

Counteracting the pornographic narrative is the job of Scripture, which “helps us create and celebrate this countercultural story” of devotion to and intimacy with one partner. She said young people “are starved for adults to be honest with them about what sex is like in a committed relationship. It’s uncomfortable, but it’s really needed.”

Those frank talks need to start with students much younger than Beste’s.

“College is way too late,” she said. “Students say it has to begin in middle school if you want to alter habits.” During a question-and-answer session that followed Beste’s talk, more than one participant told her many churches are hesitant to talk about what her research showed. “How can we prepare that open door?” one woman asked.

Start with parents, Beste suggested. “They care about their kids’ health.”

Beste said the research applies to the LGBTQ community as well. “We thought maybe lesbians and gay persons would have healthier relationships, but I haven’t found that,” she said, adding that most of her research centers on heterosexual adults. Only 10 of the 126 researchers were people of color, she said.

“Students would whisper after class, ‘I actually went out on a date. I made dinner for someone,’” she said. “Students ended relationships that were unfulfilling or abusive. They respect their partners in ways they didn’t before.”

Her next field of research will explore helping children to form just relationships. “If we can relate to them justly,” she said, “I think they have more of a chance to relate to each other justly.”