Panelists from US to Nigeria speak at ‘Girls on Fire!’ event

The “Girls on Fire!” panel discussion was put on by Ecumenical Women at the United Nations and some of its partners. It included speakers from the United States and abroad discussing issues related to gender equality and the environment. (Screenshot)

LOUISVILLE — The stark realities that many women and girls are facing around the world were highlighted in a panel discussion that took place alongside the 66th Session of the Commission on the Status of Women, which ends this week.

The virtual discussion, put on by Ecumenical Women at the United Nations and some of its partners, highlighted panelists with insights into CSW’s top issues: achieving gender equality and the empowerment of all women and girls amid a global climate crisis that is often hitting them the hardest. 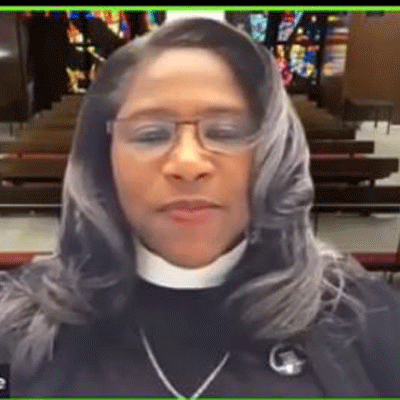 “We’ve seen how sexualized and gender-based violence has been the source of injustice and how human suffering continues to happen and how we are dying by the hands of violence,” said the Rev. Dionne Boissiere, who chairs Ecumenical Women at the UN and guided the panel. “We also are seeing how climate injustices and these intersecting injustices are affecting us.”

The Presbyterian Church (U.S.A.) and Presbyterian Women are among the organizations that are part of Ecumenical Women and have delegates participating in CSW66 virtually.

At Thursday’s event, known as “Girls on Fire!,” speakers from the U.S. and abroad included Zinabari Sunday of Nigeria, who described how oil is being drained from her community while the people live in poverty, the environment suffers and the number of widows increases.

“We are dying. We are facing hunger,” she said. “The water we are drinking, we are drinking poison. You see water flowing with oil,” and upon opening a fish from the market, you find “there was oil inside.”

She also bemoaned limited opportunities for women and girls who often are steered into domestic work because parents “prefer to train the male child.” She goes from house to house asking, “Why is it that this young girl is not going to school?”

Each panelist had a story to tell. Joy Eva Bohol, a program executive for the World Council of Churches, recalled the angst of being out of contact with relatives after a super typhoon hit the Philippines. “They had to take a boat eight hours to travel from one island to another just to find fresh water to drink and also electricity and communication towers to communicate with family,” she said.

Young women and girls are particularly vulnerable during such crises, she said, noting a reported surge in gender-based violence at evacuation centers. She also shared a personal story about having difficulties accessing menstruation products and clean water after a storm when she was younger.

In addition to natural disasters, such as typhoons and hurricanes, women and girls have grappled with the global pandemic.

Panelist Prairie Rose Seminole, an Indigenous woman in North Dakota, said she gave up a job with the Evangelical Lutheran Church in America because she needed grounding during the pandemic.

“I got to put my feet on the ground and wallow in the earth with my horses and my grief from the pandemic and those that I’ve lost; our Native communities have been hit pretty hard,” she said.

Though she found comfort there, she also noted that she lives in a part of the country where the drinking water isn’t safe, battles have been waged over an oil pipeline, and crime related to the extraction industry has been of serious concern.

Thursday’s Girls on Fire! panel was part of the 66th Commission on the Status of Women. (Screenshot)

Other panelists included Alaura Carter, who’s a program manager with The Climate Reality Project, a nonprofit organization involved in education and advocacy related to climate change. It serves as a resource for communities throughout the U.S.

“I’ve been able to meet many women who have wonderful ideas, wonderful things to say, and just need someone to really put something behind their voice and uplift them,” Carter said.

She also spoke about getting to travel to the UN Climate Change Conference, also known as COP26, last year in Scotland. “I saw a number of people from all over the world, but I didn’t see many Black girls and when I say Black girls, I mean African-American women walking around the COP meeting people in sessions, learning things.” She added, “How can you make decisions for the U.S. about our stances on climate and how it will affect people who live in the U.S., when you don’t have folks from all over the U.S., from all different colors, shapes, sizes, ethnicities, backgrounds [and] religions helping make those decisions?”

And when women are brought to the table anywhere, “are they speaking on our behalf?” Carter said. “Are they women who know what other women are going through?”

To watch the full discussion and hear from these and other panelists, go here.