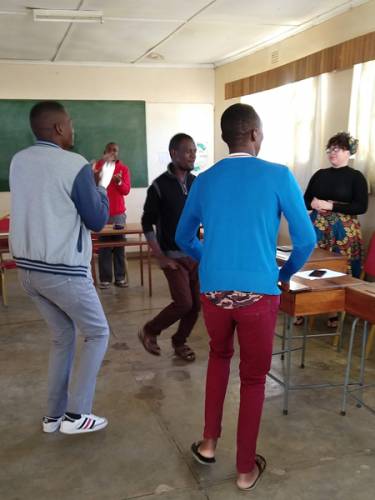 LOUISVILLE — Like many Presbyterian mission co-workers, Dustin and Sherri Ellington have a foot in two worlds.

The Ellingtons, who have served in Zambia with sons Clayton and Christopher since 2010, are currently in Pasadena, California, sheltering-in-place during the pandemic.

“Difficult as it is to straddle two continents, we also count it a privilege,” wrote Sherri Ellington recently. “Our hearts are in two places, broadening our perspective. Some issues are universal, some are distinct, but we see people’s increased desperation for God’s care for their lives and livelihoods; eyes and ears more piqued by the realities of inequality, and growing flexibility and creativity in ministry.”

So far, the pandemic has hit the U.S. much harder than Zambia, the Ellingtons told their supporters in a recent letter. They keep a close eye on Zambian news and are in constant prayer for their partners, colleagues and friends in Africa.

Zambia currently has nearly 8,300 cases and more than 240 deaths in a country with a population of 18.4 million.

They have learned to adapt.

For instance, Dustin had to learn how to teach remotely, 10,000 miles apart from his students. While the U.S. has learned to embrace virtual learning, not surprisingly the “digital divide” is even more challenging in Zambia.

When COVID-19 restrictions were put into place, Dustin’s students at Justo Mwale University were, for the most part, sent home to their provinces and countries. In early May, they began to reconvene digitally, but it was a challenge to locate everyone since they had scattered.  Some were off the grid completely, due to lack of funds, lack of cell coverage or lack of electricity.

In African culture, though, there is a belief that no one should be left behind. The class should stay together and move as a group. As a result, students took it upon themselves to help track down those who were missing and figure out a way to help them buy cell time or get access to a phone. By the time lessons resumed, everyone was connected.

“Adapting to the situation together has been interesting,” said Sherri. “Dustin quickly learned it was much easier and less expensive for his students to receive teachings over WhatsApp than other platforms. He now gives low-tech lectures, homework, comments and even quizzes over social media. For each Greek lesson, Dustin writes what he would have written on the classroom whiteboard on a piece of paper, photographs it, and sends it ahead to the Greek class group chat on WhatsApp. Then he hits the button to voice-record himself, explaining the diagrams, words, and sentences. When he lifts his finger, the voice message (lecture) instantly sends to Africa. Students can then listen to the explanation while analyzing the photos of Greek words and diagrams Dustin already sent. It really works!”

Sherri said ministering through WhatsApp has also gone well for Dustin and his students in their “spiritual companionship” group. On Wednesday nights in California, Dustin shares a passage of Scripture and asks open-ended questions. On Thursday mornings in Zambia and nearby countries, students share clips of worship songs, meditations on the Bible passage, prayer requests, and even prayers, as they normally would in person. 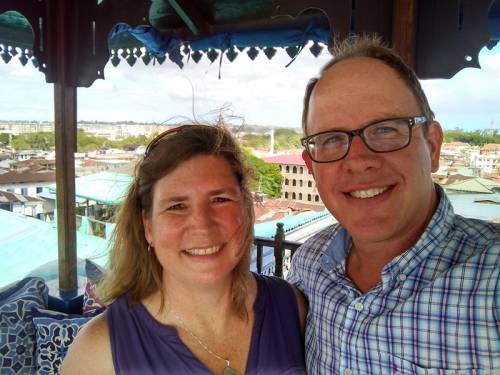 A recent photo of Sherri and Dustin Ellington, mission co-workers in Zambia since 2010. (Contributed photo)

An obvious downside to online learning is it’s difficult to be interactive during a group lesson. But there are upsides too.

“One positive is that students have every bit of material at their fingertips, and can work through each lecture at their own pace, backtracking to listen again to something they missed, and even to listen to the whole lesson again and again,” writes Sherri. “Questions and discussion happen anytime. Some students may even be doing better with this new system. One wrote: ‘An audio explanation and written notes is well explained and followed; you’re motivating me.’”

Many of the students at Justo Mwale are, for the first time, communicating in real time with someone physically located in a vastly different time zone. There is a 9-hour time difference between Dustin and his students.

“We have been very impressed with the effort these Justo Mwale students have made to ensure their education is not interrupted,” wrote Ellington. “We also admire the effort they have made to help their classmates in far-flung villages and cities of the region have the connectivity they need to succeed.”