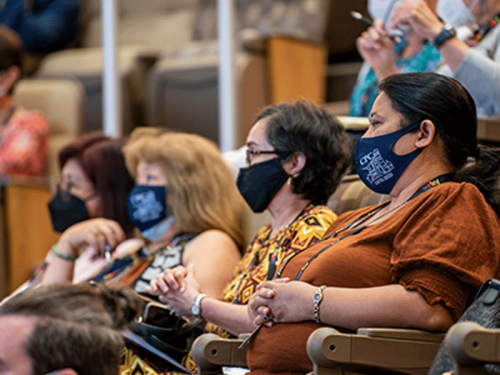 The Presbyterian Foundation’s Stewardship Kaleidoscope, held both online and in person in Cincinnati, included a workshop by Dr. Deborah Rexrode, associate for stewardship in the Presbytery of the James. (Photo by Gregg Brekke)

CINCINNATI — What happens when we rethink our paradigms of stewardship?

Do we give out of obedience, or out of abundance?

Do we tithe out of obligation, or do we share out of gratitude?

These were just a few of questions that Dr. Deborah Rexrode, associate for stewardship for the Presbytery of the James, posed to her workshop attendees in the session that she led entitled “Giving as a Spiritual Discipline” at the 2021 Stewardship Kaleidoscope conference Sept. 14.

With attendees both in the room and joining from around the country by Zoom, Rexrode began her presentation by stating that all faith leaders need to ground their teaching and preaching in the concept of giving as a spiritual discipline.

Then she traced the history of faith-based giving through examples from the Old Testament starting with “first fruits” giving described in Exodus, when God instructed the Israelites to give up the first of their crops so that they would understand the value of God’s blessings. In the first five books of the Bible, Moses brings up this idea no less than 13 times, because it was an essential concept for the people to understand.

Rexrode pointed out that due to our move away from agrarian based societies, we have lost the basic understanding of first fruits giving. In the Old Testament, God called people to bring the first yield from their crops. This demonstrated obedience and reverence to God, and also showed that they trusted God to provide enough to feed their family after they gave away the first portion. Very few of the people sitting in our pews are actually harvesting crops, so it is hard to understand this concept.

In the New Testament, the term “first fruits” takes on a symbolic meaning when Paul mentions Jesus as God’s “first fruits” in 1 Corinthians 15:20. The best that God had to offer humanity was Jesus, raised from the dead for us. In turn, we are called to sacrifice the best we have for the sake of the gospel. 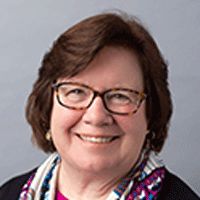 What started in the Old Testament as a specific instruction for bringing crops to the temple priest was expanded upon in the New Testament and beyond. Rexrode suggested that this idea is still relevant in our day and age, but it takes on new meaning. Today it can mean income, wealth, or any other type of blessing that a Christian receives over a year. She said, “The spiritual meaning behind the precept is the belief that everything one receives is given to us by God and given to us for a purpose.”

From first fruits to tithes

Rexrode then transitioned from “first fruits” giving to “tithing.” Nehemiah starts to connect these ideas of first fruits and the tithe in chapter 10:35-37.

“We take responsibility for delivering annually to The Temple of God the firstfruits of our crops and our orchards, our firstborn sons and cattle, and the firstborn from our herds and flocks … We will bring the best of our grain, of our contributions, of the fruit of every tree, of wine, and of oil to the priests in the storerooms of The Temple of our God. We will bring the tithes from our fields to the Levites, since the Levites are appointed to collect the tithes in the towns where we work.” (The Message)

Debates about tithing abound, starting with the definition of a “tithe.” Quite simply, the word tithe means 10%. It was detailed in the Old Testament repeatedly under the nation of Israel, but it was never outlined in the same way in the New Testament. There is lots of room for interpretation for what it means in the modern church. There are debates by scholars and theologians about whether that means net income or gross income, but these debates are not all that relevant for most churches today as studies show that the average Presbyterian gives 1-2% to the church.

Rexrode encouraged church leaders to shift their language from obedience to abundance, and from tithing back to first fruits giving. She said there is a sense of sharing the abundance when you decide to make a first fruit offering. It is done not out of a sense of guilt and obligation, but a celebration of the “harvest,” and it can become a kind of worship that allows you to support the work of others.

Offering as responding to God’s grace

The conversation then shifted to the concept of “offering.” Rexrode referenced a workshop she attended led by Columbia Theological Seminary professor Dr. Martha Moore-Keish, who led a discussion about a conceptual theological problem: We believe that all we have belongs to God and we take care of it on God’s behalf. 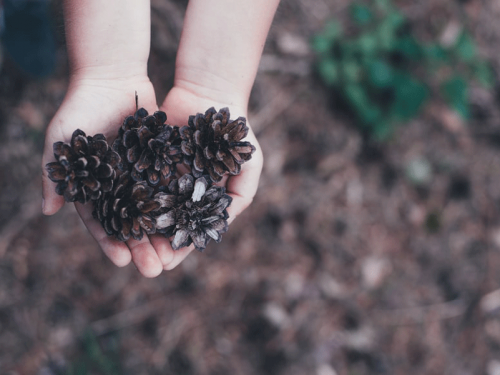 Photo by Annie Spratt via Unsplash

But offering suggests that something is ours, and we are presenting it to God. When we present the offering, are we responding to God’s grace or are we calling attention to our own generosity? Martin Luther objected to the whole notion of human beings offering anything to God as backwards. God offers gifts to us, including the sacraments. How can humans “offer” anything in return?

Rexrode then launched into a brief history of the offering. In the early church, people “offered” food for Eucharist and brought material gifts for people in need as part of their understanding of communion. In the 3rd century, sacramental theology shifted into an increasingly detailed and literal discussion of what is being “offered” in the Eucharist, the body and blood of Christ, shifting attention away from those who brought the elements as an “offering.” By the 1500s, the Book of Common Prayer eliminated language of sacrifice and the “offertory” became the place for people to share their money. By 1662 the Book of Common Prayer directed that monies were to be collected and brought to the priest at the table during the time of “offering.”

Collecting the offering became a central element to the worship service in the 1800s in American Protestantism, often becoming a ritual high point of the service. The ecumenical liturgical movement of the 20th century tried to reconnect financial giving back to the communion table, proposing that the act of giving is an act of gratitude connected to God’s own self-giving in Christ.

Rexrode encouraged participants to think about ways to build upon this connection between offering and gratitude. She suggested that people could place tokens of gratitude in the offering plates like thank you notes or a picture of someone or something they were thankful for during this past week. Anyone could contribute to an offering of thanksgiving, and this also serves as a way to let congregational leaders know about prayers of thanksgiving.

Giving as a spiritual discipline

Rexrode recommended that participants begin to think of giving as a spiritual discipline. She defined disciplines from the seminal work “Celebration of Discipline, the Path to Spiritual Growth,” by Richard J. Foster. Disciplines are the means of God’s grace that produce in us the needed transformation of heart, mind and soul, into the image of Christ. Disciplines can be divided into inward, outward and corporate disciplines. Rexrode proposed that giving qualifies as both an outward and a corporate spiritual discipline.

Why is giving a spiritual discipline? Here she referenced Mark Allan Powell’s book, “Giving to God, the Bible’s Good News about Living a Generous Life.” Powell studies Jesus’ words, “Where your treasure is, there your heart will be also.” He states that this verse is usually interpreted to mean that all God wants is for us to have the right attitude towards our money. It doesn’t matter if we have a lot or a little as long as we don’t place our trust in our money, love our money or are devoted to material things. Instead, Powell proposes that this verse means, “Your heart will follow your treasure.” Jesus’ words tell us that what we do with our treasures affects our heart. While Jesus talked about money a lot, it was not because he wanted people to give to a particular cause, but because he cares about us and knew that money has an effect on our spiritual lives. 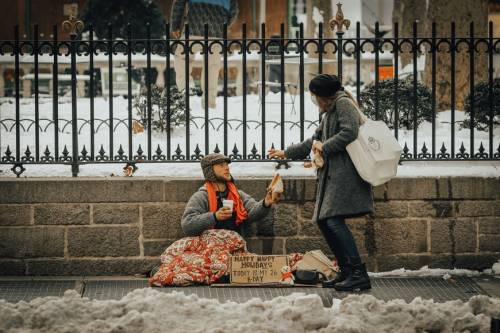 Rexrode then reflected on 2 Corinthians 8:1-15, where Paul writes about the church in Macedonia. The Macedonian church was poor, but they had joy and love for other believers; they were humble and considered others better than themselves. Paul repeatedly says that despite their situation, they participated freely in the grace of giving. The giving by the Macedonians was voluntary, sincere, and heartfelt; it was love exemplified. The Macedonians gave sacrificially, beyond their ability. They didn’t do it because they were expected to. They did it because they chose to do so.

There is a secret about giving that is revealed in this story: if individuals give themselves fully to God, Christ will teach them how to give from their hearts; that attitude is exemplified by the early church in Macedonia. If leaders can lead people into an authentic relationship with God, people will learn to give freely and generously to glorify and support the work and love of Christ. People will begin to take to heart the teaching of Jesus and it will be done cheerfully and voluntarily.

We cannot command people to give. We can only share with them how it’s done, Rexrode said. Giving first to the Lord and then to others is a mark of true discipleship. The purpose of any spiritual discipline is to help us grow in the grace and knowledge of Christ, and to become more like Christ as we grow in godliness. It then becomes our responsibility as leaders to enable people to give consistently and to invite people to be in covenant relationship with the church.

Covenants instead of pledges

Rexrode then asked, “What might it mean if you were to invite people to make a covenant instead of signing a pledge card? And then what if, instead of an annual stewardship campaign, you had an annual celebration of a covenant renewal? What would it look like for our congregations to establish a covenant relationship with God and the church?”

She shared that using this idea of a “covenant” instead of a “pledge” has been a powerful tool in working with congregations. Pledges can feel like a form of obedience. Covenants stem from a sense of abundance and celebration of a right relationship. Covenants also include more than financial gifts. They can include a commitment to participate more regularly in worship, to volunteer, to pray, and to give.

Finally, Rexrode reminded workshop participants that framing giving as a spiritual discipline will help us grow in the grace and knowledge of God and become more Christ-like as we grow in generosity and godliness. She closed by encouraging workshop participants to share stories of the ways that giving is making a difference and transforming our lives and others, and ended with this quote from Henri J. Nouwen in “A Spirituality of Fundraising”: “We have a vision that is amazing and exciting. We are inviting you to invest yourself through the resources that God has given you — your energy, your prayers, and your money — in this work to which God has called us.”

The Rev. Greg Allen-Pickett is pastor and head of staff of First Presbyterian Church in Hastings, Nebraska. Send comments on this article to robyn.sekula@presbyterianfoundation.org.