Dr. Kathryn Gin Lum talks about her new book, ‘Heathen: Religion and Race in American History,’ during a weekly podcast sponsored by the PC(USA) 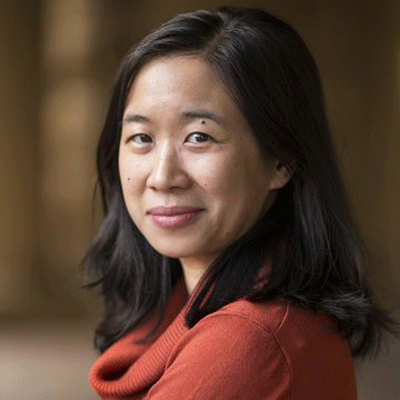 LOUISVILLE — “A Matter of Faith: A Presby Podcast” posed a relatively straightforward question to its guest last week, Dr. Kathryn Gin Lum — a question that took the Stanford University scholar nearly half an hour to answer. Listen to the most recent edition of the podcast, put on by the Presbyterian Peacemaking Program and Unbound: An Interactive Journal of Christian Social Justice, by going here.

“How should we understand the declining membership of mainline Christian denominations using the perspective outlined in your book [“Heathen: Religion and Race in American History”]? These are often the older, more white denominations where young people chose to be ‘spiritual but not religious.’ But we don’t see that as much in the immigrant congregations and people of color where communities are often thriving.”

Published in May by Harvard University Press, the book “tries to argue for the relevance, the importance of religion, particularly the way in which Christianity creates the ‘us vs. them,’ the ‘Christian v. heathen’” dichotomy, “and what that has to do with race,” said Gin Lum, herself a person of faith. “We don’t really talk about heathens anymore. People assume that religious othering has been replaced by racial othering, essentially. We divide and subdivide the world into different supposed races, which is a social construction.”

One thing the book claims, its author said, is that “race is not just about physiology. It’s not just about skin color … It’s about the differentiation of the white savior … and how the white savior has differentiated themselves from everyone else.” While “everyone else” used to be referred to as heathens, today we use words like “developing countries” or “Third World,” or, “if you look at the religious landscape,” Gin Lum said, “’frontier people’ or ‘unreached people.’”

In making the argument “that race is not just about skin color,” Gin Lum said she’s indebted to her friend, Virginia Tech scholar Dr. Sylvester Johnson, who’s written that race is about the division of the world between Europeans and non-Europeans. One group is the colonizers, and everyone else is the colonized, “and they need [in this traditional worldview] the help of the colonizers to lift them up,” Gin Lum said. “This whole idea of lifting people up, of educating them and converting them, traces back to this dynamic of Christians trying to convert and save heathens.”

For centuries, people labeled “heathen” have been “pushing against this concept,” according to Gin Lum. Finally, in the context of the U.S., people stopped commonly using the term, which comes with it the notion that “vast numbers of people in the world could be damned because they believe the wrong things.”

“I think that has actually made a difference,” she told Doong and Catoe. “Younger white Americans are aware of this pushback and that might have something to do with the demographics you mentioned. White Americans thought, ‘It’s our time to missionize the world.’ Now there are people in Korea and Africa, for instance, who see the U.S. as the place that needs to be missionized.”

The church, Catoe said, has not grappled with this chapter in its history.

“This grappling needs to happen,” Gin Lum replied. “In the book I call this justification the ‘Get out of Jail Free’ card. I still see it being used today for atrocious, horrible things.”

Her decision to become a professor of religion and history “is part of this ongoing grappling,” she said. “I think this book hopefully shows that I don’t have the answers, but I’m trying to raise the questions.”

She grew up in a denomination that doesn’t ordain women to ministry. “If I’d grown up in a different denomination, I might have gone on a different path. I might have gone to seminary,” she said. “But for me, the study of history allows me to see other people who have grappled with these issues and find inspiration from or companionship with the people I find in history who have been dealing with these exact same kinds of issues.”

While it can be easy for some to say Christians have historically been “on the bad side” of racism and colonialism, “that overlooks the experiences of the many people in the so-called ‘heathen’ world — the people who have adopted Christianity,” Gin Lum said. “And you know, as a person who descended from such people, I refuse to call people who have accepted Christianity ‘dupes’ or ‘blindfolded’ or whatever … I think that people can work in many ways to counter the injustices that have clearly arisen from the system of labeling people as heathens and trying to use that ‘Get Out of Jail Free’ card. There are many ways to oppose that.”

“What I appreciate about the book,” Catoe said, “is that it depicts historically how these things are damaging everyone and how we are losing rootedness and the beauty that is what we believe as the creation of God within our faith traditions.”

Gin Lum said she also discusses how “heathenism is something that is in the eye of the beholder,” and that people who once had the “heathen barometer” trained on them are now turning the tables on white Christians.

“It’s a really powerful way, I think, of pointing out the hypocrisies in white saviors trying to supposedly uplift the rest of the world when in reality they’ve devastated their land in certain ways,” she said. “So, all of these tropes that applied to the heathens can so easily be turned back on white Christian America as well.”

As the conversation concluded, Gin Lum thanked the hosts for their thought-provoking questions.

“This is exactly why I wrote the book,” she told Doong and Catoe, “to raise questions and have conversations.”

New editions of “A Matter of Faith” drop every Thursday. Find them here.