Jan. 14 event to feature panel of experts from around the country 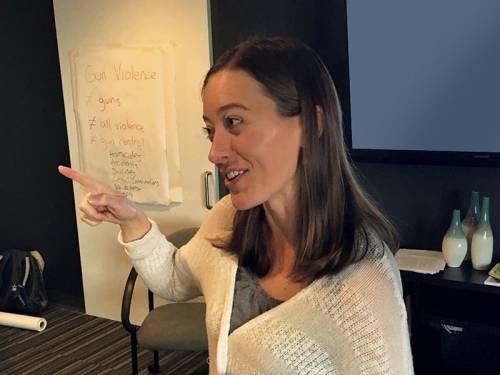 Sarah Logemann addresses questions about the gun violence curriculum she wrote for the collegiate ministry network of the Presbyterian Church (U.S.A.) Courtesy of Tammy Wiens

LOUISVILLE — Talking about gun violence can be tricky in church settings, where the topic may be viewed as too political or too controversial. But a Jan. 14 webinar in the “Standing Our Holy Ground” series may make it easier for congregations and other people of faith to have those conversations.

“This isn’t a taboo topic but something we can bring into the community of faith at all ages,” said Sarah Logemann, pastor of First United Methodist Church in Miles City, Montana. “We let the political aspect of it sort of divide us. But, really, this is about human beings flourishing, which was always God’s wish.”

Logemann, the author of gun violence curriculum used by collegiate ministry leaders, is one of three panelists who’ll be speaking during the 2 p.m. webinar.

The series is a yearlong look at gun violence and how people of faith can bring about change.

“There’s a lot of fear about addressing it in congregations,” Logemann said.

During the webinar, Logemann will be joined by Katie Day, an academic, minister and gun violence prevention activist who has taught at United Lutheran Seminary in Pennsylvania, and Virginia Classick, co-chair of the Gun Violence Prevention Task Force of the Episcopal Diocese of Los Angeles.

Classick said she will offer suggestions on how to keep the topic of gun violence prevention from being too polarizing for communities of faith.

Although the media sometimes frames discussions about the topic as pro-gun vs. anti-gun, it’s important to “help people from the beginning see this movement as needing to include gun owners and non-gun owners,” Classick said. “Mothers Against Drunk Driving are not anti-car, okay?”

Shootings at houses of worship, such as West Freeway Church of Christ in White Settlement, Texas, and the Tree of Life synagogue in Pittsburgh, bring heightened attention to the problem of gun violence in the United States.

But Classick stresses that gun violence extends beyond mass shootings to include domestic violence, suicides and even children getting hold of guns in homes.

“We have to look at the various types of gun violence and look at the preventive measures that are distinct to each of those,” Classick said. “For congregations, it’s not only responding with interest or energy around this when there is a mass shooting incident but to look at the day-by-day carnage in this country and make a commitment to sustain the work.”

To register or learn more about the webinar, which also will feature Emily Brewer, executive director of the Presbyterian Peace Fellowship, go here.

The work of the Peacemaking Program is made possible by gifts to the Peace & Global Witness Offering.