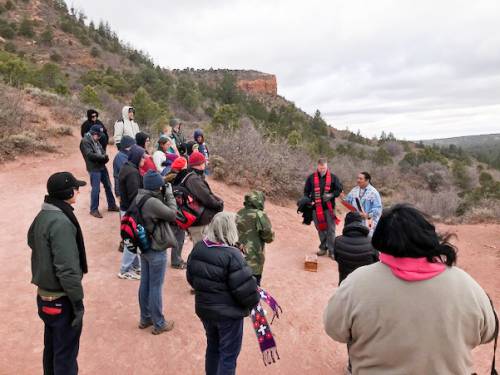 LOUISVILLE — Nearly 30 spiritual leaders recently gathered in New Mexico to show their support for threatened public lands sacred to Native Americans, and for tribal sovereignty. The event, organized by New Mexico Wildlife Federation and Creation Justice Ministries, brought together representatives from a number of denominations and groups including Presbyterian, Lutheran, Catholic, United Church of Christ, and Jewish, as well as several Native American organizations.

The group was welcomed by Utah Dine Bikeyah, a local nonprofit actively working to protect Bears Ears. Its mission is to “preserve and protect the cultural and natural resources of ancestral Native American lands to benefit and bring healing to people and the Earth.”

“Bears Ears National Monument is one of the most unique, picturesque and sacred areas of America. Recognizing this, tribal and spiritual leaders from various faith traditions throughout the west came to lift up the monument as a place of great healing, wholeness and spiritual value not only to the region but to the nation as a whole,” said the Rev. Andrew Black, a Presbyterian minister and director of community relations for the federation. “For the administration to consider shrinking the monument and fragmenting this pristine landscape is a grave injustice that fails to understand the sacred interconnectedness between the area’s land, water, wildlife and people who have been on this landscape for thousands of years.” 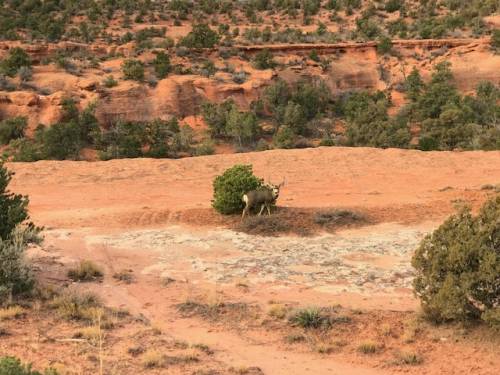 Bears Ears, according to Black, is the only national monument with official tribal appointees that serve as the primary advisory body. The group manages the spiritual, cultural and natural heritage. The Bears Ears Commission of Tribes, which includes Hopi, Navajo, Ute, Ute Mountain Ute, and Zuni appointees, is urging the Trump Administration to uphold the monument.

In supporting the recent visit, Davis Filfred, member of the Navajo Nation, Bears Ears commissioner and U.S. Marine veteran, stated “We encourage all people to come to Bears Ears because there is nothing like it in the world. We want people to come see the land, how we use it and how it is sacred to us.”

“We recognize that an attack on one sacred place is an attack on all sacred places and we have come together to highlight for the nation, the moral and ethical implications on our land, water, wildlife and the whole of creation,” said Black.

The Rev. Ginna Bairby, pastor in the First Presbyterian Church in Taos, New Mexico, says this is an issue of importance to every Presbyterian.

“When our Book of Order spells out the ministry of all members, it names as part of that ministry ‘caring for God’s creation’ at the same level of importance as ‘proclaiming the good news in word and deed’, ‘studying scripture’, and ‘lifting one another up in prayer,’” she said. “We are all called to life into this ministry in whatever ways we can. It is part of the responsibility and the joy of our shared Christian life.”

“If you take care of the earth, the earth will take care of you. The healing of one is the healing of all,” said Joseph Brophy Toledo, traditional leader from Jemez Pueblo. “If we all express our concerns as one, we can be heard louder. Sacred sites are like our churches, kivas, white house boundaries and places of great healing and magnetism. As Earth People, we ask you help us help you. Our purpose is to help, not hurt, to build, not break.”

Jeff Swanson, a pastor in the Evangelical Lutheran Church in America (ELCA), is a retired military chaplain and veteran.

“As a veteran of our nation’s combat spanning from Vietnam to Iraq, my spirit was calmed at Bears Ears,” he said. “I departed wanting other veterans and Americans to behold the expansive beauty that will embrace their being.”

Joan Brown, Franciscan sister and executive director of New Mexico Interfaith Power and Light, said they stand in solidarity with their “indigenous brothers and sisters.”

“Already we have too much polluted land and water from irresponsible and short-term profit extractive industries like uranium, oil and gas,” she said. “As we enter more deeply into climate change, we must protect these areas for all including future generations.”

President Trump is expected to travel to San Juan County early next month to make his announcement.

November is Native American Heritage Month and for those involved, the spiritual journey was about more than public lands and tribal sovereignty.

“Bears Ears National Monument is a national symbol of healing a long history of racial injustice,” said Shantha Ready Alonso, executive director of Creation Justice Ministries. “Standing with tribes to affirm their leadership, respect sacred sites, and be grateful for the gifts they share with our communities are ways we counteract the ugly legacy of the Doctrine of Discovery.”

Alonso says more than 100 faith communities across the nation are praying for the preservation of heritage landscapes and sacred sites that are under threat.