by the World Council of Churches| Special to Presbyterian News Service

KARLSRUHE, Germany — “Do not break a woman’s wings of flight…

Violence against women, rape and injustice, is nothing else but evil and darkness, and we ask Christ to bring light to those that suffer and to drive out the darkness.

Stop the violence because you are not only scarring us physically but emotionally also.

We will listen to you. We will respect you and we will believe you.

Not for one, but for all, we hope for justice!”

The Waterfall Tapestry of Solidarity and Resistance has been assembled and is on display at the World Council of Churches’ 11th Assembly running through Sept. 8 in Karlsruhe, Germany.

Each of the panels woven into the tapestry represents a lived experience and a message of commitment to speak and act for a world without rape and violence.

The Waterfall is a tangible symbol of the Thursdays in Black campaign, in which individuals, churches, groups, and organizations show that they are a part of a global movement to eliminate gender-based violence. 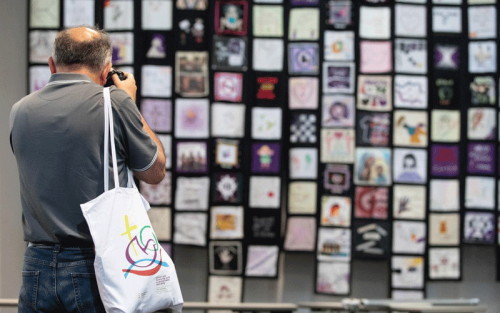 The campaign is simple yet profound. Wear black on Thursdays.  Wear a pin to declare you are part of the global movement working towards a world without rape and violence. Show respect for resilient women in the face of injustice and violence.

As one woman said when she sent in her panel, “Thursdays in Black is a campaign that unites solidarity in this field of vulnerability. It gives not only victims like me but all people a platform of solidarity in the fight against rape and gender-based violence — not only for exchanging experiences, which is the focus in many other places, but in a multi-layered, intelligent and cautious activist way. At the same time, one feels — especially as a victim — a hopeful orientation, which goes hand in hand with joint, solidarity-based actions and statements.”

The Tapestry will continue to grow. More panels, more stories are coming to this Assembly. If you have a panel to add, please contact Sara Speicher, ssp@wcc-coe.org.