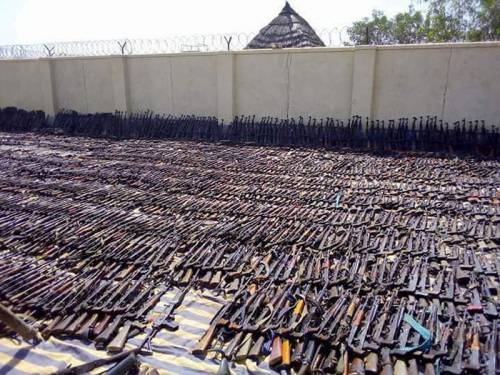 Weapons that were surrendered by the five clans in Douncy County and Gok State in South Sudan. (Contributed photo)

LOUISVILLE — The people of South Sudan are one major step closer to a lasting peace.

Just days ago, with an expiring peace agreement looming, President Salva Kiir officially swore in his rival, Riek Machar, as vice president of South Sudan. The ceremony, at the state capital in Juba, represents the formation of a unity government and fosters the hope of ending six years of civil war.

This occurred just as the United Nations was set to release a withering report, accusing both sides of preventing aid from reaching communities, virtually starving its own citizens. The violence has also killed an estimated 400,000 and displaced millions of South Sudanese.

In a statement, President Kiir wrote: “I have just sworn in the First Vice President and the vice presidents. An event which many had thought was impossible. This action signifies the official end of the war and we can now proclaim a new dawn in South Sudan. Peace has come and it has come to stay, not to be shaken ever again in this nation. We have fulfilled and honored the dream of African Union goal of silencing the guns in Africa this year. My brother, Dr. Riek Machar and I, are now partners in peace. The long awaited Revitalized Transitional Government of National Unity (RTGoNU) will now be formed, and its formation brings an end to the long suffering of our people.”

While hopes are high, skepticism remains. Peace agreements have fallen apart before.

Under the threat of international sanctions, President Kiir signed a peace agreement with rebel leader and former vice president Riek Machar in August 2015. Machar returned to Juba in April 2016 and was sworn in as vice president once before. Just three months later, violence broke out again between the two factions. Kiir is a Dinka, Machar is a Nuer. Together they represent the two largest ethnic groups in South Sudan. Both sides blame the other for violating past agreements.

Rev. Peter Tibi, executive director of RECONCILE Peace Institute in Yei, has worked to mediate peace, allow aid to safely reach people who need it and facilitated trauma healing. Along with community leaders, government officials and representatives from the United Nations, in 2018 he met with five clans in Duony County and Gok State. The clans have a history of conflict over cattle raiding, water sharing and revenge killings. The death perpetrated by both sides numbers in the tens of thousands. But this time, soldiers wore signs around their necks that they had surrendered their weapons. In staggering numbers, the guns were carefully placed on the ground. 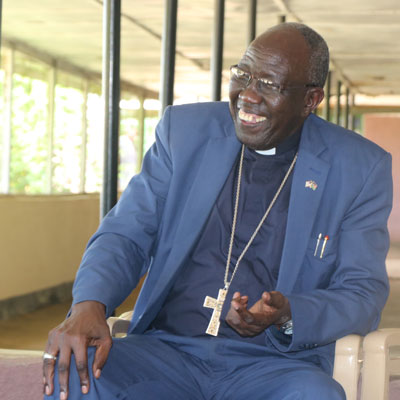 While Tibi worked at the grassroots level, the Rt. Reverend Peter Gai Lual Morrow, moderator of the Presbyterian Church of South Sudan (PCOSS) and former chair of the South Sudan Council of Churches, long-time partners of the Presbyterian Church (U.S.A.), worked with the United Nations and the highest levels of government to broker peace. The South Sudan Council of Churches was a key advocate for peace at the High-Level Revitalization Forum (HLRF), convened by the Intergovernmental Authority on Development (IGAD) in Addis Ababa, Ethiopia, one of the important steps that lead to the current agreement.

Bob and Kristi Rice have served as mission co-workers in Juba since May 2017. In an email Monday, they wrote, “Given the history of South Sudan, we, like many others, are guardedly hopeful that there will be peace in South Sudan. There are good signs of cooperation between the government and opposition, but there are also big obstacles to be overcome.” 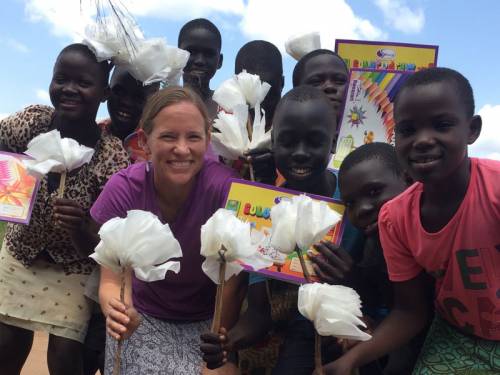 The Rev. Nancy Smith-Mather appears with children who participated in a trauma healing workshop. (Contributed photo)

Also living and working in South Sudan are Lynn and Sharon Kandel, regional liaisons for the Horn of Africa, and mission co-worker Leisa Wagstaff, working with the PCOSS education department. Revs. Shelvis and Nancy Smith-Mather, who lived in Yei for several years, were forced to leave when violence broke out there. When they could not return, they moved to Uganda to work in the refugee camps, where many South Sudanese have been displaced. Nancy Smith-Mather continues to serve as program manager for the South Sudan Education and Peacebuilding Project (learn more at pma.pcusa.org/site_media/media/uploads/worldmission/pdfs/southsudaneducationpeacemaking.pdf),while Shelvis Smith-Mather works with World Mission while also pursuing a doctorate at Oxford University, focusing on documenting the church’s role in peace building and creating curriculum for the RECONCILE Peace Institute.

South Sudan is the youngest country in the world, but because of the ongoing civil war, many children have never known peace or had the opportunity to attend school. Today 70 percent of the nation’s children are not in school. The literacy rate is only 34 percent. The U.N. says that a girl in South Sudan is statistically more likely to die in childbirth than finish primary school.

“‘Those who break the chain of resentment, retaliation, violence, and hostility are people who take away the sins of the world,’ said Neville War, and I cannot think of a better quotation to describe the Christian leaders with whom we work in South Sudan,” said Nancy Smith-Mather. “Our South Sudanese partners are incredible in their perseverance, faith and courage. With Christ’s power, they are helping people heal, reconcile and become peacemakers. We feel humbled to work alongside them and learn from them.” 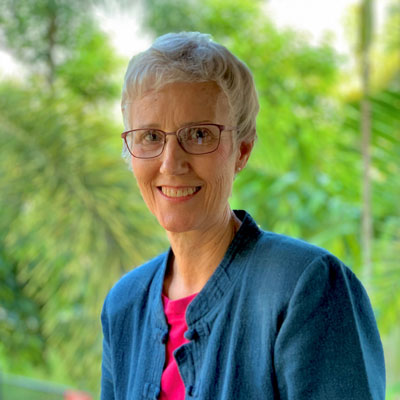