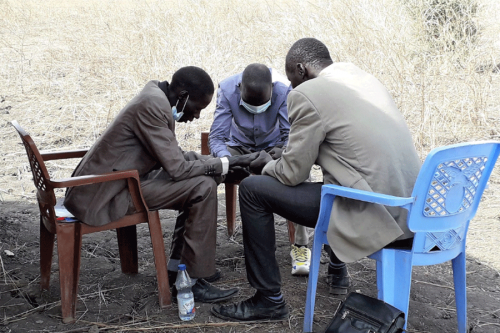 Workshop participants pray together after confessing their pain. (Photo by Kristi Rice)

This disputed region sits along the border of Sudan and South Sudan. When South Sudan gained independence in 2011, its people chose to become part of South Sudan. But government officials in Khartoum (Sudan) wanted to keep the resource-rich land for themselves.

The attacks and destruction of Abyei by the Misseriya tribe in Sudan are thought to be attempts to chase people away from their land. Residents of Abyei live in fear of ongoing attacks.

Misseriya herders are members of a northern nomadic Arab tribe. They roam Abyei and other border areas with their cattle looking for water and pasture during the dry season and to trade goods.

“There is very high need for trauma healing here, and people seem to respond to this approach as being highly effective for touching people’s hearts” said mission co-worker Kristi Rice, who is a trained facilitator. “The reasons for trauma are so many in South Sudan — the many years of war and conflict, people being displaced multiple times and losing everything, years of missed or truncated education — all of which leads to insecurity, conflict within families, sickness, poverty, prejudice, fear, etc. So, the testimonies that we hear range across a broad spectrum of the types of inner wounds.”

Mission co-worker the Rev. Bob Rice, who teaches at Nile Theological College, met a group of pastors from Abyei, and in March Kristi Rice and a group of facilitators conducted a trauma healing workshop there. 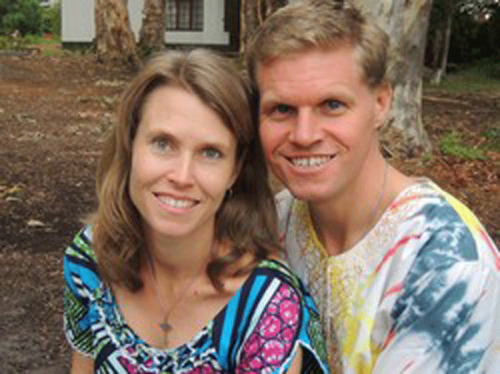 “Recognizing the challenge this community has faced, our church leadership in the South Sudan Presbyterian Evangelical Church (SSPEC) decided Abyei should be the next location for a healing and reconciliation workshop,” said Kristi Rice. “Participants were invited from several different churches in town, as well as from newer centers in the remote villages.”

Rice said that during the middle of the Healing Hearts Transforming Nations workshop is the cross-workshop session, where participants are invited to take their pain to the cross and ask Jesus to take it as described in Isaiah 53:4.

“We performed a short drama to illustrate how we often hold onto our anger, bitterness, or pain, resisting God’s invitation to ask God to take it and give healing in exchange,” she said. “As they prayed, each person was encouraged to write down any sin or pain they had been holding in their hearts on a piece of paper. They then shared their pain with one or two other people and prayed for each other. One by one, people came forward to nail their papers to a cross, often pausing to kneel in prayer or grief as they did so. As we gathered in a circle and burned all of the papers, I got goosebumps thinking of what God was doing in each person’s heart.”

Rice said that spontaneous singing broke out, celebrating the “freedom Jesus gives us through his death on the cross.”

The following morning, participants were asked to share their experiences from the previous day. One woman told the story of conflict she was having with her in-law. They would frequently quarrel when they met at the market. “During the workshop, she gave over her pain to Jesus, and God enabled her to forgive her relative,” Rice said. “For the first time in a long time, she slept well and felt her heart was free and clean.”

A man who is a leader in the community said he had learned a lot during the workshop. He told Rice he had seen tribalism practiced in the church but now saw the importance of being united across tribal lines. Another woman shared that she had such a terrible conflict in her home and had decided not to return. After the workshop she was ready to return home and resolve her conflicts. 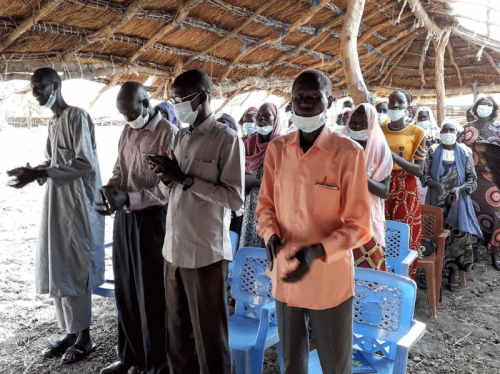 Participants in the Abyei workshop worship together. (Photo by Kristi Rice)

On the final day of the workshop, the conversation centered on collective repentance for wrongs that have been done to groups in South Sudan and the importance of giving people an opportunity to forgive.

“Many people were moved by the confessions, including acknowledging wrongs done by Europeans and Americans in the colonization of Sudan and the exploitation of resources,” said Rice. “We concluded with a celebration of the unique talents of each people group and the unity that we have as children of God. As we celebrated together, the big smiles and laughter felt redemptive, showing the beauty that God can bring out of pain when we face our wounds and confess wrongs to each other.”

Rice said there has been a great response from the workshops and they are in high demand.

“Each time we hold one, we are told by someone, ‘We need to have this at my church,’ or ‘Our government leaders need to go through this workshop!’” 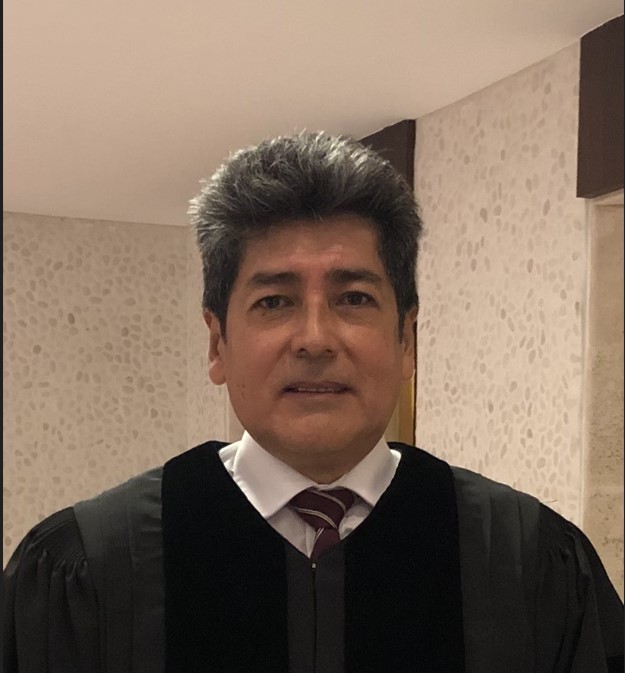