First international APCU member will serve as ‘window to Asia’

LOUISVILLE — Hannam University in Daejeon, South Korea—consistently recognized as one of Asia’s best Christian universities—is the first school outside the U.S. and Puerto Rico to join the Association of Presbyterian Colleges and Universities (APCU) as a full voting member. 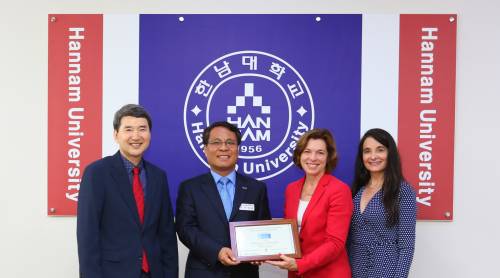 Dr. Duk-Hoon Lee, president of Hannam University and an alumnus of the school, gave thanks to God for the unanimous decision by the APCU Board of Directors to welcome Hannam as its 56th member institution.

“We are very pleased,” Lee says of the board’s decision. “We plan to share our spirit and experience with other member schools and to strengthen our international relationships through diverse programs, including development of a new degree system, as well as student and professor exchange programs.”

Hannam University, founded by Presbyterian missionaries in 1956 after the Korean War, has an enrollment of more than 13,000 undergraduate and graduate students on its two campuses. This year, as Hannam celebrates its 60th anniversary, the Rev. Samuel Cheon, head of the chaplain’s office, says the university is reconfirming its identity as a Christian school and a Presbyterian institution.

“As a member of APCU, we will provide a base in Asia and a multicultural experience to APCU-member schools,” Cheon says. “Hannam will serve as a window to Asia, through which multicultural and international opportunities will increase. Hannam already has a great international network with universities in Asia (including China), Vietnam, the Philippines, India and Japan,” he says. “Hannam will be a good resource for APCU and vice versa.”

APCU institutions are a diverse group of colleges and universities bound by a shared commitment to learning, faith and service, each operating independently. The APCU and the Presbyterian Mission Agency collaborate to further the mission of APCU-member institutions and the church’s longstanding commitment to higher education. Each member honors the dignity and worth of every person and values its connections to all other APCU members, the Presbyterian Church (U.S.A.) and the world.

Dr. Barbara Mistick, chair of the APCU Board of Directors and president of Wilson College in Chambersburg, Pennsylvania, visited South Korea and Hannam University in early October, where she and President Lee signed a memorandum of understanding for a student exchange program between their two schools. 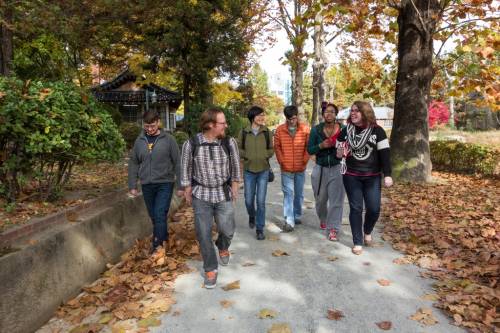 Wilson enrolled nearly 1,100 students from 18 states and 16 countries this fall, an all-time high in the college’s 147-year history.

“International partner school relationships bring tremendous value not only to our students and sister institutions, but to APCU members and PCUSA as well,” Mistick says. “The relationships help to deepen campus experiences for all and serve as a gateway to understanding among people of faith worldwide.”

Jeffrey Arnold, executive director of APCU, met with leaders from Hannam University on the campus of Agnes Scott College in Atlanta in May to discuss membership. Arnold is optimistic that Hannam’s membership in the APCU may lead other colleges and universities to consider membership as well, which could lead to expanded opportunities for all member institutions.

“Hannam expressed their enthusiasm for membership in the APCU this spring. They put everything in place to join us even before the Board had voted unanimously to welcome them into the association,” Arnold says. “This reinforces the strength of our association and illustrates the opportunities that exist around the world for Presbyterian-related educational partnerships and collaborations.”

Tony De La Rosa, an ex-officio member of the APCU Board of Directors and interim executive of the Presbyterian Mission Agency, points out that several of the mission agency’s World Mission co-workers teach in seminaries, Bible colleges, universities and lay academies in more than 40 countries. “Our mission co-workers have expressed interest in hosting faculty members from APCU schools and engaging in joint research initiatives,” he says. “Hannam’s initiative in joining the APCU may prompt other colleges and universities worldwide to explore the mutual benefits of APCU membership.”

Daejeon is one of six international Young Adult Volunteer (YAV) sites, joining 15 sites in the United States to host 79 YAVs in the 2016-17 placement year. The YAV program started in 1993 and has given more than 1,600 PC(USA)-affiliated YAVs opportunities for a year of service and exploration. YAVs serving in Korea are housed on the campus of Hannam University, where they attend Korean language classes weekday mornings the first two months of their 11-month service, and devote the rest of their time to volunteer placements at various service sites. While in South Korea, the YAVs are supervised by World Mission co-workers Kurt Esslinger and his wife, Hyeyoung Lee. Through a “buddy program” Korean students volunteer alongside the YAVs at service sites and also assist with language and cultural understanding. The Korean students are fully devoted volunteers, leading activities just like the YAVs. While volunteering, Korean students in the buddy program improve their English language skills and fulfill service hours required by the university.

To date, eight Korean students from Hannam University have served at national YAV sites in the U.S., according to Esslinger. “We are taking the 2016-17 year off to make adjustments, and we hope we can send more Korean YAVs to national YAV sites in the future.” He adds, “This is a really great example of mutual mission and overturning the assumptions that mission work is mostly resource abundant countries sending helpful missionaries to needy countries, but rather that we are all sending and receiving. We are all being transformed by each other.”

“I’m thrilled about Hannam University joining APCU,” says Chip Hardwick, director of the Presbyterian Mission Agency’s Theology, Formation, and Evangelism ministry area, to which APCU relates. “It will strengthen ties between the PC(USA) and the Presbyterian Church in Korea, while also equipping APCU institutions to broaden their international relationships. APCU is an important partner with Theology, Formation, and Evangelism, and we will in turn be enriched by Hannam’s membership in this organization.” 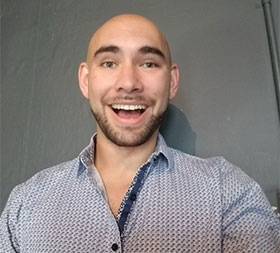