And often, that’s a helpful strategy for us, too 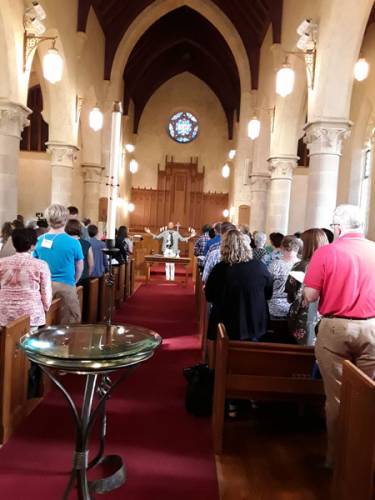 Those gathered in the Texas capital are exploring the essential connection between how we worship and how we work for justice. Before they heard from Roberts, who is president of Johnson C. Smith Theological Seminary, worshipers recalled through song, story, Scripture and prayer how God came into the world in Jesus as a refugee in the time of empire.

They also remembered the saving death of Jesus, his life and his love.

With that as a lead-in, Roberts began addressing the struggle for justice in our culture beginning with Job.

“Lord Tennyson once described (the Book of Job) as ‘the greatest poem of both ancient and modern time,’” Roberts said. “Actually, it is an investigation into the problem of divine justice.”

A prosperous man who has everything, family, fortune and friends, Job loses it all due to no fault of his own.

Crushed, confused and searching for answers, Job finally speaks of his frustration:

“God has no right to treat me like this —it isn’t fair! If I knew where on Earth to find him, I’d go straight to him. I’d lay my case before him face-to-face, give him all my arguments firsthand. I’d find out exactly what he’s thinking, discover what’s going on in his head. Do you think he’d dismiss me or bully me? No, he’d take me seriously. He’d see a straight-living man standing before him; my Judge would acquit me for good of all charges.” —  Job 23: 2-7 (The Message)

But God is silent.

“Some of us today know what it’s like,” Roberts said, “to cry out to the heavens wondering what we’ve done to incur divine disfavor. Straining for good news but hearing none.”

Noting that even Jesus, on the night before his crucifixion, asked God to remove his burdens but received no response, Roberts asked, “Could it be that in the kindom of God — the reindom of God — sometimes the greatest way of saying something is to say nothing at all?”

Recently, Roberts watched an interview with African American activist Ruby Sales. In 1965, after Sales was released from jail in Lowndes County, Alabama, for picketing a whites-only store, a special county deputy pointed a shotgun at her. Seeing this, Jonathan Daniels, a white Episcopal seminarian, pushed Sales, 17, out of the way.

Taking the shot meant for her, Daniels died instantly. Traumatized, Sales spoke hardly a word for the next seven months. Then, despite death threats, she testified against Daniels’ murderer.

“But a bunch of old cronies, 12 white men, acquitted him,” Roberts said.

During that interview, Roberts heard Sales say that her friend’s sacrificial act revealed the depth of his character and his commitment — without the utterance of a single word.

“Maybe the greatest way of saying something,” Roberts said, “is to say nothing at all.” 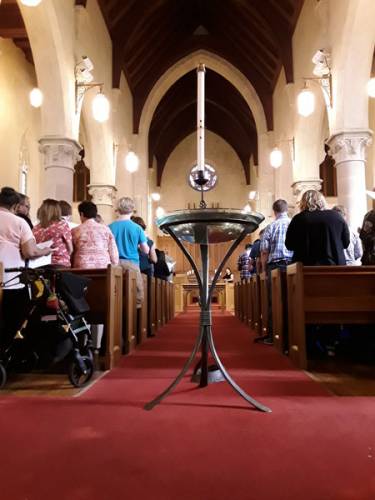 The Chapel at Austin Presbyterian Theological Seminary was the site of opening worship Monday for the Just Worship gathering. (Photo by Paul Seebeck)

But having worked with words all of his professional life — first as an ad man in New York, and then in ministry for 20 years — Roberts has seen the power of words to comfort and heal and inspire. He said he knows there is a time to speak.

Comparing “the clanging cymbal, noisy gong, media-obsessed tweet types” with the power of language “to move the chains of injustice and to set the oppressed free,” he said, “We know that talk is cheap and faith without works is dead.”

It is in the aftermath of these life-giving words found in Isaiah 58:7, “to share your bread with the hungry, and bring the homeless poor into your house,” that the prophet makes a rather confounding statement relative to the examples of God’s silence with Job and Jesus, according to Roberts.

Isaiah seems to say that “once you have done these things,” Roberts said, “then your light will break forth like the dawn. You will call and the Lord will answer, you will cry for help, and God will say, ‘Here I am.’”

A curious boy asks an old soldier
Sitting in front of the grocery store,
“How did you lose your leg?”
And the old soldier is struck with silence,
Or his mind flies away
Because he cannot concentrate it on Gettysburg.
It comes back jocosely
And he says, “A bear bit it off.”
And the boy wonders, while the old soldier
Dumbly, feebly lives over
The flashes of guns, the thunder of cannon,
The shrieks of the slain,
And himself lying on the ground,
And the hospital surgeons, the knives,
And the long days in bed.
But if he could describe it all
He would be an artist.
But if he were an artist there would be deeper wounds
Which he could not describe.

And there is the silence of the dead.
If we who are in life cannot speak
Of profound experiences,
Why do you marvel that the dead
Do not tell you of death?
Their silence shall be interpreted
As we approach them.

“In the midst of it all, as we utilize our time,” Roberts said, “maybe we should just shut the hell up and listen.”

Just Worship is a cooperative effort among Austin and Johnson C. Smith seminaries, the PC(USA) Office of Theology and Worship and the Presbyterian Association of Musicians.