Presbyterian siblings believed seminary should be affordable to all, regardless of circumstances 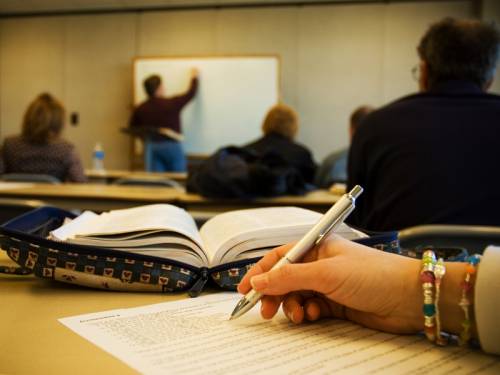 JEFFERSONVILLE, Indiana — The bequests of two sisters recently contributed a total of more than $500,000 to the Theological Schools Endowment Fund. But that’s only part of the story.

To understand the impact of the gift is to know something of the love both women had for their congregations and pastors, and a dinner party conversation that set their legacy in motion.

Because they wanted no credit or recognition for their efforts, names and other potentially identifying details have been changed. The sisters might say the why, not the who, is the real story anyway.

Sarah and Mary were born in the 1920s, grew up in the South and attended a Presbyterian-affiliated college. Sarah moved to the Pacific Northwest and worked as a scientific researcher. She grew to love her adopted home. Mary, a few years younger, joined her there and worked for an arboretum and a realty office. In retirement, Mary continued to volunteer at nonprofit organizations.

They were good financial stewards, investing in the market early and regularly and by buying a duplex where they lived on one side and rented out the other, thereby funding most of their mortgage. They both thought strategically about the impact of nurturing a long-term investment.

When their niece, Joan, moved to the area with her family, Sarah and Mary took them in hand, introducing them to friends and helping them acclimate to their new home. They especially grew close to Joan’s two daughters.

The sisters were active in a Presbyterian congregation that not only appreciated the arts but valued inclusivity. Over the years Sarah and Mary spent there, the predominantly white church had a Black pastor, Asian pastor and a woman pastor. All situations were unusual for their times.

Regardless of race or gender, and from the time the sisters were children, “they loved their pastors,” said the Rev. Dr. Lee Hinson-Hasty, Senior Director for Theological Funds Development for the Presbyterian Foundation. “And they gave regularly to the church.”

A conversation that changed everything

Of all dinner party conversation topics, death and money are two of the least popular. Nevertheless, the subject of last wills and testaments came up at the table with the sisters’ pastor and a couple of trusted friends from church.

The sisters were in their late 70s or early 80s by this time, and neither had children. Both saw a way to help others who came after them to make a seminary education for future pastors more affordable.

“They wanted to make sure that deserving students got the help they needed to complete their theological education,” niece Joan said. “Clear to them was that seminary should be affordable for anyone regardless of their circumstances.”

Because their pastors had meant so much to their lives and their faith, Hinson-Hasty added, the women decided to make sure other Presbyterians could benefit from such care and leadership.

“It was something that really gave them peace of mind and joy to think about,” he said.

Eventually, Sarah and Mary moved back South to care for their mother. Though they loved to travel and host dinner parties, they were good stewards of their resources.

Mary and Sarah became highly involved and active volunteers in the Presbyterian church they joined upon their return. It was different from their congregation in the Pacific Northwest. In particular, it called pastors right out of seminary.

Sarah died a few years ago; Mary, last year. A cousin handling their finances noted both instructed that, even when they were infirmed and no longer able to attend church regularly, the pledge to their church should be paid first.

It was, after all, the first check they always wrote each month.

Legacy Giving Sunday, which is coming up on May 2, is a great opportunity to consider how our present actions can benefit others for years after we’re gone.

Answering that question could touch our hearts before going anywhere near our bank accounts.

“Having conversations about what matters and what gives us joy with trusted friends in faith and life are life-changing for us … but also generations after us,” Hinson-Hasty said. “In this case seminarians now and in the future will become pastors and congregations and communities will be served because a few faithful folk broke bread together decades ago. Their eyes were opened and they took the next most faithful step to put a plan in place.”