…be led forth in peace. (Isaiah 55:12). Support to the Peace & Global Witness Offering.
Make A Donation Click Here >
Home › Shining the light of Christ on the streets of Indianapolis 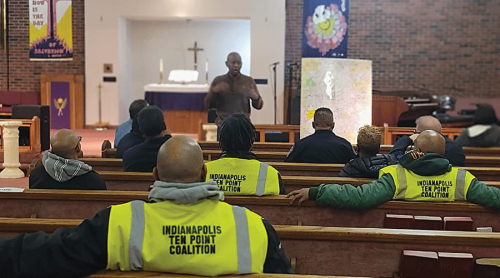 Members of the Indy TenPoint Coalition gather before taking to the streets of Indianapolis. (Contributed photo)

LOUISVILLE — Anthony was dealt a bad hand in life.

Looking intently into the eyes of the Rev. Charles Harrison, pastor of Barnes United Methodist Church in Indianapolis and president of the board of the Indy TenPoint Coalition, the young man visiting from Chicago made his tearful confession.

“I was living in a community that was so violent, it was forcing me to do things I didn’t want to do but felt like I had to do,” he said. “But initiatives like TenPoint gave me hope that I didn’t have to be the victim of my circumstances; that there were enough loving and caring people that I could become what God designed for me to be in life.”

And that, Harrison said, is exactly what the faith-based nonprofit that he has led since 1999 attempts to do.

“We try to give people an opportunity to fulfill their God-given purpose,” said Harrison.

The Indy TenPoint Coalition — with its “boots-on-the-ground” approach to reducing violence, increasing employment and enhancing educational achievement — caught the attention of Leslie Olsen, chair of the mission team at Faith Presbyterian Church in Indianapolis.

“Because this amazing organization led by Rev. Harrison became newsworthy, our supporting them wasn’t a difficult decision to make,” said Olsen. “It was kind of a new concept to me anyway that these volunteers — these incredible people who are just like you and me — would be willing to put their lives on the line every night or as often as they did it. They were out there patrolling our streets, which were becoming more and more dangerous. They were doing God’s work in a spiritual, faithful way, and I was just really inspired by that.”

Like many congregations taking part in the Peace & Global Witness Offering, Faith is committed to the work of peacemaking at all levels of church and society. The Offering is also unique in that half of it is directed to efforts at the national church level for peacemaking and global witness work around the world, while 25% is retained by congregations for local peace and reconciliation work, and 25% goes to presbyteries for similar ministries on the regional level.

For Harrison, the mission of peacemaking in his city’s streets is no mere abstraction, but something concrete, immediate and deeply personal.

“Many of us were in the shoes of these kids,” he said. “For instance, I grew up without my biological father in my life. I also had a brother who was killed at the age of 21 when I was 14.”

Harrison said that he always tells this story.

“The individuals that killed my brother showed up at the church for the wake and the funeral,” he explained. “On the streets, you hear who did the killing, and there I am at 14 years old, and they’re greeting my parents as if they were grieving the loss of my brother when they were the ones that killed him. So, when my friends and I were plotting to kill them, it was the impact of men in the church in Jeffersontown (Louisville area) that intervened in my life. And I think that’s the real emphasis for a lot of us pastors. We have seen the results of what happens when adults invest in the life of kids that are troubled. Or something may have happened in their life that could take them down the wrong path in life. There are a lot of ‘Charleses’ out there, that if they had the right intervention, we could save them from the streets and from prison and the grave.”

Faith’s pastor, the Rev. Charlotte Lohrenz, further sees the church’s partnership with the Indy TenPoint Coalition as an integral part of living into their identity as a Matthew 25 congregation, committed to the work of “building congregational vitality, dismantling structural racism and eradicating systemic poverty.”

“We signed on to Matthew 25 very soon after the denomination rolled it out, which we saw as an effort to really refocus on being the hands and feet of Jesus Christ,” Lohrenz said. “For us here at Faith, we were slowly moving into areas of actually changing the systems that perpetuate poverty. And although we had already done some work toward the goal of dismantling structural racism, we had a lot to learn as a predominantly white congregation. One is that we need to come alongside as allies. We can’t go in and say, ‘This is how you do it,’ or ‘We’re going to do it for you.’ What I see in the Indy TenPoint Coalition is a grassroots movement that we want to be supportive of in appropriate ways.”

Over the 23 years that the nonprofit has been in Indianapolis, Harrison said that some 40 or 50 congregations have partnered with them in a variety of ways. Sometimes the support comes in the form of financial contributions. Other times, churches have helped by providing job opportunities for ex-offenders.

“If we’re going to get people to stop selling drugs and to put the gun down, then we have to provide an alternative for them, such as job training and job placement,” he said. “In partnering with area churches, we really try to be the light and the voice of Christ on the streets in addressing the violence that disproportionately impacts young men of color.”

The success of the organization’s mission is substantiated by metrics showing just how much their work has accomplished. During the past six years, as the city of Indianapolis has experienced record-breaking violence, in those areas where TenPoint has used its “boots-on-the-ground” approach, there has been a 100% reduction in homicides both of youth and of adults. 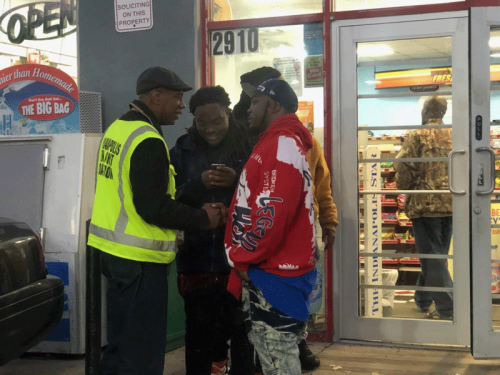 “That’s the impact of this model,” Harrison said. “We cannot stop the violence, but certainly we are able to reduce the level of shooting, stabbings and homicides on the streets.”

Lohrenz agreed that the results TenPoint gets are remarkable. “It’s like the movement of the Holy Spirit is provable,” she said.

Harrison said that the biggest challenge that his organization — and society in general ­— faces is the breakdown in the family that creates poverty and often leads to young people getting involved with drug trafficking and gangs, putting them on a pathway of crime and violence.

“As the church community, we have to ask ourselves how we can become a part of the extended family to help address the issues so a 14-year-old doesn’t feel like he has to sell drugs or go steal or rob a store in order to help provide resources for the family so they can have enough food,” he said. “Our job is to be a support system in identifying these kids on the street who may be more likely to get involved in criminal activity. What has exacerbated this more than anything else is easy access to guns.”

The proliferation of guns and the growing gun violence epidemic are issues that the PC(USA) has long addressed through its actions, policies, studies and resources.

“Presbyterians can make much a bigger difference than they realize,” said Simon Doong, associate for Peacemaking in the Presbyterian Peacemaking Program, “whether it be educating themselves and others so that one more firearm is safely secured in a household, writing a letter to their congressional representative about the need for safety around guns, or praying for victims of gun violence.”

Doong said that whenever Presbyterians can work together with such community organizations as the Indy TenPoint Coalition, those opportunities and the magnitude of their impact are amplified even further.

“When these partnerships aim to not only address the issue of gun violence, but also the underlying root causes of violence, they are transforming communities,” he said.

Olsen sees just such a transformation playing out through Faith’s relationship with the Indy TenPoint Coalition.

“I believe what is written in Matthew’s Gospel, ‘Happy are people who make peace; they will be called God’s children,’” she said. “I strongly believe that our congregation feels that way. It’s an important part of being a Christian to be the peacekeeper and to help in any way that we can. Supporting an organization like TenPoint is a terrific way for us as a congregation to feel like we’re doing something that’s helping.”

Lohrenz agrees that the partnership lifts the entire congregation.

“It’s challenging our worshipers to deeper levels of discipleship in Jesus Christ,” she said, which is also what the PC(USA)’s Special Offerings are designed to do.

“I was thinking about how participating in Peace & Global Witness is so needed in our world now,” she added. “As a pastor and a Christian, what I really appreciate about the Special Offerings that have the national, international and local component is that they really do make it possible for us as a single congregation to participate in this larger work that we would not be able to do on our own. Then we get the nudge to look at what’s going on in our local community and how we can be actively engaged and contributing there. It’s a wonderful balance and a new kind of challenge for us every time.”

The work of the Presbyterian Peacemaking Program is made possible by gifts to the Peace & Global Witness Offering.