by Nancy McLaughlin | Reprinted with permission from the Greensboro News & Record 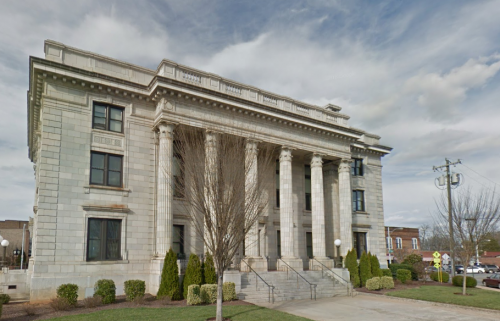 The court square in Graham is shown in this undated image. (Photo via Google Street View)

GREENSBORO – It happened in Graham, North Carolina, the seat of Alamance County, on Feb. 26, 1870.

A racially charged crowd hung Wyatt Outlaw from a tree until his last breath.

None of the hooded men involved in the lynching of the former slave, who was then serving on the Graham Town Commission, would ever serve prison time.

“It was murder,” said the Rev. Frank Dew, a member of the Peace and Justice Task Force of the Salem Presbytery, the local group of Presbyterian (U.S.A.) churches, which held a “memorializing” service last Tuesday, Feb. 21, on the grounds near the Alamance County Courthouse, where the lynching took place. The service took place after the group’s annual meeting.

The committee learned of Outlaw while reading Just Mercy, a New York Times bestseller by upcoming Bryan Series speaker Bryan Stevenson, the founder of the Equal Justice Initiative, an effort aimed at helping people who are considered to be in the margins of society.

Stevenson, whose efforts have reversed death penalties for dozens of condemned prisoners, makes a case in the book of a broken justice system and its repair. The book, a memoir and case study of those he sets out to prove have been wronged by the criminal justice system, is also a history lesson of how he says it came to be. As part of his research, Stevenson listed more than 4,000 lynchings of African Americans between 1877 and 1950.

“We say if we don’t know our history, we are doomed to repeat it,” said Dew, the Presbyterian task force member. “One of the most important parts to know is where we have messed up badly.”

The members of the Peace and Justice Task Force took special interest in the February 1870 lynching of Wyatt Outlaw because of its proximity.

Members of the presbytery, which had previously planned to hold its 113th annual meeting at Graham Presbyterian on Tuesday, moved to a brief memorial service with songs and special readings at the site of the lynching. Task force members want to spur interest in other Presbyterian congregations doing the same where lynchings took place near them.

“This is a way of lifting up him and the life that was taken from him,” Dew said. “We feel like the church has a responsibility to lift up those things in order that we do remember.”

Much of what is known about Wyatt Outlaw comes from the research of Burlington historian Walter Boyd and various historical archives.

The group found an interactive map of documented North Carolina lynchings at lynching.web.unc.edu.

“The story just leapt from the pages,” said Dave Wright, a Burlington native and local playwright, who with Boyd’s research, last year produced “Wyatt Outlaw” with the Paramount Acting Company, the community theater sponsored by the city and Department of Recreation and Parks.

Outlaw was born the son of one of Alamance County’s wealthiest white landowners and one of his slaves. In 1860, Outlaw was sold to George Outlaw, a tobacco farmer near Burlington.

During the summer of 1864, Outlaw escaped a work detail in Virginia and joined the Union Army.

He returned home in the years immediately after the Civil War and found work as a carpenter for the North Carolina Railroad. He also organized a chapter of the Union League, which mobilized black voters and acted as a fundraising mechanism for social causes, such as the construction of churches and schools.

He was later asked to serve on the Graham Town Commission, which along with his work with the Union League, made him a target of the White Brotherhood, a Klan-like group terrorizing newly freed African Americans. He would reject efforts in a split African American community to return violence with violence.

Eventually he was kidnapped, and later hung from a tree in the Graham town square.

An investigation was launched and arrests were made, but no one was convicted. Dew acknowledges that some people would rather not think about this part of American history.

“And all the more reason … to remind people that this is a part of who we are as a people,” Dew said. “One of the things that’s really impressed me is that Germany has made a really strong attempt to have historical markers about things that happened during Nazi times so that people remember. They’re not hiding that.

“They want people to remember it,” Dew said, “so they don’t go down that road again.”