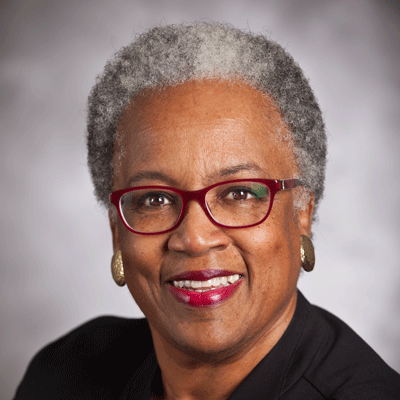 LOUISVILLE — Each day about 300 million images are uploaded for public consumption. Choosing just the right image to use with Sunday’s sermon is an important task for any preacher. Just why that is — and what considerations ought to go into selecting and describing that image — was the subject of Wednesday’s Equipping Preachers webinar, part of a monthly series by the Synod of the Covenant. Wednesday’s lecturer was the Rev. Dr. Teresa L. Fry Brown, the Bandy Professor of Preaching at Emory University’s Candler School of Theology. Watch the webinar here.

Fry Brown called her 90-minute talk “O Say Can You See: Images and Illustrations in a Visually-Saturated World.” Among her cautions was about preachers who “override the biblical text with too much illustration.” Preaching is in itself “embodied attention,” Fry Brown said: to the text itself, the listening congregation, the community, the world around us, God’s work in the world and to preachers themselves.

“When we preach, we tend to pay attention to the person not paying attention to us,” she said, including those looking down at their phones. It could be they are searching online for the meaning of a reference the preacher just made.

Preachers do well to recognize the messages their gestures put out. “When I do this,” Fry Brown said, waving her arms over her head, “you can’t figure out if I’m trying to bring airplanes in.” Her students have taught her that when she raises the right side of her mouth, she’s ready to make a sermon transition. “When I am animated and do a shoulder roll, I am getting toward the end of the sermon,” she said. “People anticipate even when you lack the words.”

One of the best tools a preacher can use is to simply stop talking and pay attention to what’s going on in the worship service. “You’ve written a phenomenal manuscript, but you don’t know when to back away from it,” she said to her audience of preachers, many of whom were nodding their heads at what she was saying. The preacher’s voice can give color and tone to the spoken word.

“If I were in the Upper Room, what was going on while I’m sitting and waiting?” she asked. “It’s my experience in the Upper Room, and I’m listening. You move to first person instead of second person. You can ask people what it was like, and as preachers, we say, ‘I know how you felt.’ I really don’t, but I can imagine being in that spot.”

We can’t, of course, see everything that’s in the biblical text. “I can give you what I imagine is under the surface,” Fry Brown said, “but I can’t give you everything.”

She led participants through an exercise in multisensory text interrogation, including what does a text taste like, such as the salt of tears? Or smell like, or how does it feel and move?

She invites preachers to be well-read and well-spoken, and to be people who listen widely. Fry Brown asked: What was the last song you heard? Our speech patterns develop depending in part on what kind of music we listen to. Consume the day’s events from multiple news sources, she recommended, because “there’s no monolithic congregation.” Reacting to one illustration she displayed, some people saw Noah’s family emerging from the ark while others saw nations dividing up.

“Make it plain,” she recommended for pastors selecting an illustration. Also remember to center the listener and keep the illustration underwhelming while contextually based. Fry Brown said she’s learned that worshipers attending early worship on Sunday are usually bibliocentric, while those at the second service might have “floated in” to worship. Those two crowds might well need different illustrations, and so Fry Brown will modify them to better fit those in worship.

Fry Brown sometimes has her students preach on the Bible’s background characters, such as the mother who packed the boy’s lunch that led to the feeding of more than 5,000 people. Imagine the boy returning home: “Hey mom!” he says. “Guess what happened to my lunch?”

At Pentecost, to pick a timely example, all were in one place and in one accord. That made Fry Brown think of holiday meals while growing up part of a large family, when children sat at one table and adults at another. “We were all in one place, but not in one accord,” she said.

It’s not imperative to target illustrations at, for example, one gender group or another. Many women are sports fans — Fry Brown (“Pray for me,” she said) is an Atlanta Falcons season ticket holder — and many men cook and take care of babies. “Illustrations may work better than we think they will,” she said.

Fry Brown has been known to send preaching students to a shopping mall to watch people interact. “When you preach, you can tell the emotional temperature by watching the congregation while you preach,” she said — even it means having to watch “those little boxes on the screen,” a task that’s taxing for any preacher.

Finally: if people are losing focus with a chosen illustration, move on, she advised. “Segue to the next thing” can be the best way for preachers to re-engage their hearers.