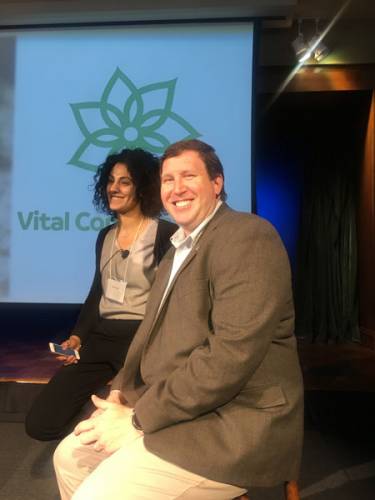 ATLANTA — The Rev. Dr. Tom Bryson, who is part of the Vital Congregations (VC) writing team, said he was floored at what he heard at VC gatherings in Denver and Atlanta the last two weeks.

In all, nearly 250 mid council and church leaders from 14 presbyteries met in those East and West Coast gatherings to prepare to launch vitalization efforts in 2020 through the two-year Vital Congregations initiative.

Bryson, pastor of  Southminster Presbyterian Church in Vestavia Hills south of Birmingham, Ala., led an Adaptive Leadership session during which he took leaders through the seven marks of vital congregations (click here to read).  Congregations will study these marks in the first year of the initiative to assess and discern what new thing God might be calling them to live into in year two and beyond.

After encouraging church leaders to use a technique called appreciative inquiry, a technique that focuses on identifying the assets (positive) rather than deficits (negatives), Bryson said he was encouraged by what he heard.

“One woman who had been trained as nurse in her first career told me she was taught to always look for problems,” Bryson said. “Never hearing this before, she called it ‘game-changing.’”

Surprised that nearly half of gathered leaders hadn’t heard of appreciative inquiry, Bryson talked about how conversations can be started as congregations enter into the Vital Congregations initiative process for change.

“Describe a time when you were most engaged and alive in your congregation,” he suggested. “Ask what it is you most value? What are the core factors that give life to your congregation when it is at its best?”

Calling it “an honor” to be part of the Vital Congregations team, Bryson said he felt that church leaders left both gatherings encouraged and strengthened to enter into what he calls “the good and worthy work” in the initiative.

Near the conclusion of the West Coast gathering, Bryson had a conversation with a minister from Houston.

“That floored me,” Bryson said.  “Something had stirred in him, moved him away from negative thinking about the future of the church to a place of anticipating big things.  I couldn’t be happier with how things went.”